One of most powerful Yantras to achieve protection against all sought of negative energies and for self-control. 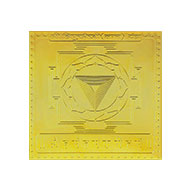 Bhairavi Yantra - The Goddess of decay 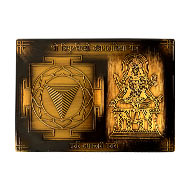 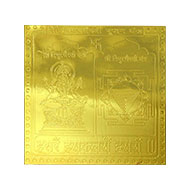 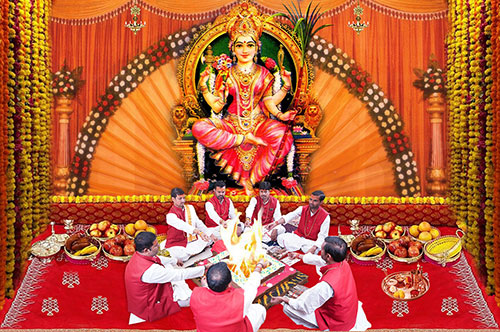 Maa Bhairavi is one of the primordial forms of Supreme feminine energies who have existed since the beginning of time. Bhairavi is the fifth goddess among the Dus Mahavidyas Goddesses and is often also referred to as the ‘Kaal Bhairavi’. She is one of the fiercest forms of Feminine divinity who is associated with goddess Kali, She is also known as Chandi in the Durga Saptashati. She is the consort of Lord Bhairava, the fierce forms of Lord Shiva. Goddess Bhairavi is known as the goddess of decay and She is the manifestation or the personification of destruction. Destruction is not always negative. Hence, goddess Bhairavi represents destruction of negative habits such as pride, jealousy and all the negative attributes one holds.

Goddess Bhairavi is also referred to as the ‘Tripura Sundari’. The word ‘Tri’ in this name denotes three which means She is present in all three stages of the consciousness namely the state of being awake and alert, the state of being fast asleep and the state of dreaming. This denotes that Maa Bhairavi is the manifestation of the Supreme Brahman and anyone who worships Her with pure devotion can achieve this state and be closer to the Supreme. Book Tripur Bhairavi Puja and Yajna

Goddess Bhairavi is portrayed differently in various ancient Holy Scriptures. According to one Holy Scripture She is associated to goddess Kali and Her iconography describes Her as being seated in a creation ground on top of a corpse which does not have a head. She wears red garments with a garland of severed heads around her neck. She has three divine eyes and her head has a crescent moon.She is dark skinned, blood on her mouth and has four hands. In one hand She holds a sword, in another hand She holds a Trishul, in Her third hand She is holding the severed head of a demon and with Her fourth hand She is seen posing in Abhaya Mudra blessing Her devotees and telling them to be fearless.

According to the other iconography, She resembles to Goddess Parvati. She is portrayed seating on a lotus and has four hands. She holds a rosary in one hand, a book in another hand, and with Her other two hands display Abhaya and Varada mudra.

In Vedic Astrology, Goddess Bhairavi controls the Lagna aspect of one’s kundali. Lagna is the first moment when a soul contacts matter (earth) and takes birth. It is the aspect associated with the traits, qualities and behavioural patterns of the person. Therefore one can say that Bhairavi controls our behaviour, pattern of thinking and other personality traits.

Bhairavi Yantra is a very powerful tool that emits the divine power of Goddess Bhairavi. This Yantra emits mystical powers that nullify the ill-effects of black magic, liberates the native from evil influences of bad spirits and negative energies. The Bhairavi Yantra is also a great tool to get a spouse of your dreams and have a successful marriage life. It is also said to bless the couple who cannot conceive to get an offspring. The Bhairavi Yantra on the spiritual realm elevates the worshipper spiritually and helps one achieve the Brahman stage.

Bhairavi Yantra: An object of Meditation

The Bhairavi Yantra is also a powerful tool for meditation that can be worshipped daily to offer prayers to Goddess Bhairavi and also to channelize one’s mind and focus. Meditating over this Yantra helps one attain mental stability as it calms the wavering mind and thus gives one the power to achieve control over thoughts. This pious yantra also helps one to become emotionally stable and stops one from giving in into temptations.

The Bhairavi Yantra is a great medium through which one can connect to the Supreme and attain union with them. It is gateway which connects one to their Higher self through the geometric shapes that make the yantra. One can connect with the energy that exists in the macrocosm through the power of resonance which can be achieved through mantra chanting.

The Bhairavi Yantra comprises of geometrical figurines that comprises of Padma (divine lotus), Chakra (circle), Trikona (Downward triangle) and the mantra. The Padma represents absolute force of the Supreme which is the Absolute Truth. It signifies detachment. The Chakra represents perfection and the peaceful creative void of the Vishudha Chakra. In the series of the five fundamental elements it represents the Air Element. The Trikona or the triangle facing downwards to be specific represents Yoni which is the core of all creations.

One must always pay attention while installing the Yantra, as it is very important to place the Yantra in the appropriate direction. Yantra energizes the location where it is installed. You may place it near the entrance of your home/office/shop or in your living room or reception or study room or office cabin. You may keep it on a table or use as a wall hanging. Yantra is best placed in the East direction facing West.

It gets energised by the rising rays of the Sun and with the divine vibrations of the East corner and provides positive transformation energies to the dwelling through its mystical geometry. Yantra are the ultimate answer for establishing a vibration of large amplitude or resonance with the benefic energies of the cosmos. Thus the vibrations generated get us in contact with highly elevated energies & entities which help us attain spiritual course of conduct in our daily lives & enhance the spirituality within.