Goddess Kamakshi: The symbol of strength and the selfless devotion 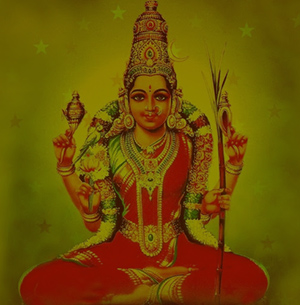 One of the most vibrant forms of Tripura Sundari or Goddess Parvati, Goddess Kamakshi is popularly known as the universal Mother Goddess. The Kamakshi Amman temple at Kanchipuram is known to be the main abode of Goddess Kamashi. The presiding deity of the city of Kanchi is Goddess Kamakshi. The Goddess is popularly referred as ‘Sri Kamakshi’. The word “Kamakshi” is derived from Sanskrit where "Ka" signifies Goddess Saraswati (Goddess of Education), "Ma" denoted Goddess Lakshmi (Goddess of Wealth) and "Akshi" means Eye. Thus, Goddess Kamakshi is the one Whose one eye represents Goddess Saraswati while Her other eye denotes Goddess Laxmi.

Goddess Kamakshi is called by various names like Kirtimati, Devagarbha in extant Tantric works like Tantrachudamani. She has four hands. According to the iconographic attributes Goddess Kamakshi is believed to be the representation of Shri Vidya - Shri Lalita Maha Tripurasundari and is seen seated in the Padmasana posture, bestowing grace, peace and abundance on those who come to worship Her. Besides holding Pasa and Ankusa in Her upper hands, Sri Kamakshi Devi is seen holding sugar-cane bow and floral arrows in her lower hands.


All About Kamakshi Yantra

In order to gain prosperity, knowledge, fame, peace in relationship and blissful life you can worship the Kamakshi Yantra. She is believed by the saints and sages to be the provider of wealth and learning. In order to safeguard yourself from evil eyes and negative energies, you can install the Kamakshi Yantra in your house and office. The Kamakshi Yantra is a sacred instrument that consists of a figure or symbol characterized by simple geometric forms arranged in a symmetric design that resonates with the powers and positive frequencies of Goddess Kamakshi. This mystical religion based diagram has the power to attract the principles of Goddess Kamakshi and carries the signification of a mantra or process. This powerful Yantra resonates with the positive energies of Kamakshi Goddess and blesses the worshipper with abundance.

This Yantra can also be used for meditating over Goddess Kamakshi. This will help in making you more focused and mentally stable. It will also aid in attaining union with Goddess through geometric visualization. This Yantra is the window through which you can align with divine energy. Through resonance it connects you to the energy present in the macrocosm.

Yantra are the ultimate answer for establishing a vibration of large amplitude or resonance with the benefice energies of the cosmos. Thus the vibrations generated get us in contact with highly elevated energies and entities which help us attain spiritual course of conduct in our daily lives and enhance the spirituality within.