Red Garnet: Properties, Benefits, Healing Powers, How To Wear It for Maximum Benefit

A Garnet is a pseudo-silicate, Si O4 compound with various combinations of metals within it. Red is the most common colour, though many colours of this mineral exists including green, purple, black and blue. Both almandine (aluminium-iron) and pyrope (magnesium-aluminium) minerals can be called Red Garnet Gemstones. Both of them are isometric crystal systems. Some huge specimens of Red Garnet Gemstone found in Australia have measured tens of feet across. The stone is also a popular produce of East Africa. 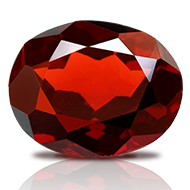 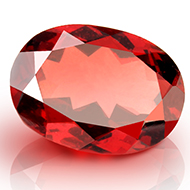 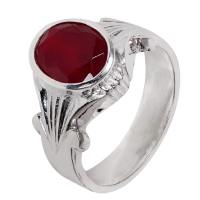 Red Garnet was a highly used gemstone in Europe, both during Antiquity and the Middle Ages. It was used during the baptism of Constantine to convert him to Christianity. Garnets are also extremely durable. Some Red Garnets have been discovered from tombstones dating back to thousands of years. As suggested, they were throughout history for good luck and to ensure a peaceful journey into the afterlife. Red Garnet Gems has always been associated with 'journeys'. The stone was carried by travelers, traders and businessmen. Today South India and Australia are the biggest producers of this stone, though it is abundantly found throughout the world.

In Vedic astrology, Red Garnet is ruled by Mars. Mars being the god of war and energy is the commander-in-chief of the assembly of the nine planets. His red colour is the symbol of blood and perseverance in human life. The planet rules qualities such as courage, valor, endurance, self-confidence, leadership abilities and governs the energy, passion and drive. It is the driving force of learning new skills and achievement in life. A person with a malefic Mars may exhibit short-temper, brutality, aggression, quarrelsome nature and infidelity. Wearing Red Garnet nullifies the malefic effects of Mars. 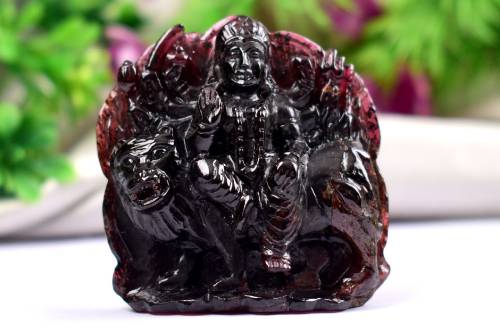 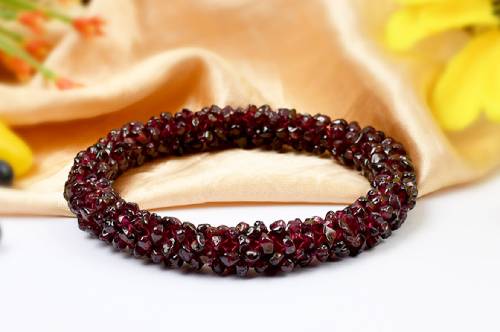 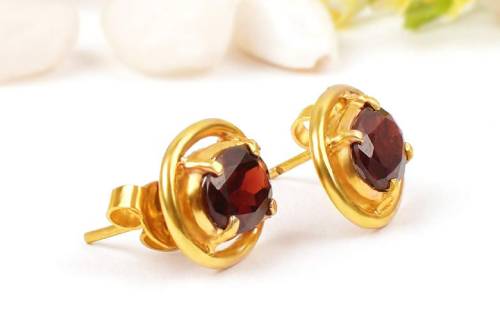 O The stone helps remove feelings of insecurity and problems in physical and mental health.
O Wearing this stone may help prevent prostrate and weight issues.
O It may also strengthen the wearer's bone structure.

Wearing a combination of Gemstone and Rudraksha is the best way to make the most of it. Rudraksha Ratna Science Therapy® (RRST®) devised by Neeta Singhal makes the use of both Red Garnet gemstone and Rudraksha beads. It is a holistic healing therapy that uses the curative and healing properties of Rudraksha and Gemstones to balance and energize chakras. In RRST we deal only with natural and un-treated gemstones. The reason Rudraksha Ratna Science Therapy is widely acclaimed by many is that it works on chakras, the very basis of life and is a holistic therapy that heals from deep within with absolutely no side effects. In RRST setting of a gemstone, as a ring or as a pendent, the bhasm made of the planetary herb is kept inside one tube and the metal that improves the planetary effects, is kept in another tube. In case of Red Garnet, Khadira Bhasm and metal Copper are used to attract the cosmic power of Mars. The gemstone is then energized with its precise seed mantra on a specific day to empower it to eliminate all the malefic effects of the planet and reinforce its beneficial effects. Thus the gemstone becomes a powerful talisman suitable to be worn by any person irrespective of his birth chart.

During consultation, the blocked chakras that are causing the mental, emotional and physical issues are identified and limiting beliefs are addressed. Chakras become imbalanced when your thoughts and attitudes tend towards fears and negativity when facing challenging situations in life. Blocked Chakras manifest emotional disorders and physical ailments. It is only after blocked Chakras are balanced and activated that you can transform your life of suffering, obstacles, and confusions into love, success, and happiness. As per the chakra status and concerns of the client, a suitable combination of Gemstone and Rudraksha bead is recommended. As per the cosmic colour they emit, the gemstones work on specific chakras. So Red Garnet works on Muladhara (Root) Chakra and the RRST Consultant identifies the correct finger position for drawing maximum energy from the stone. Rudraksha and Gems are powerful agents of energy and work on releasing the negative energy stored in the form of stress in the blocked chakras, thereby activating them and tuning them to their natural state.

Situated near the tailbone or at the base of coccyx, Muladhara Chakra is the first chakra among the other six. It lies between the animal instinct and human consciousness. It is a four petal Chakra and these four petals denote: Mind (Manas), Intellect (Buddhi), Consciousness (Chitta) and Ego (Ahamkara). It denotes our innermost connection to Mother Earth, emotions, reality, existence, physical strength and energy. All the aspects of a stabile life, harmonious family and survival emanate from this Chakra. It is known as the foundation of our personality. Its corresponding Mantra is LAM. A stronger and balanced Muladhara Chakra brings in more vitality; vigour and growth whereas an imbalanced one attracts negative qualities are laziness, inertia, self-centredness and domination.

When or Which Day To Wear:

It can be worn on Tuesday in the morning after bath. If need be, one may additionally chant the seed mantra “LAM” 108 times before wearing.

How to care for your Red Garnet Gemstones:

Who Can Wear Red Garnet:

O Best for those who have inferiority complex, insecurity and problems keeping emotional stability.
O It may also strengthen the wearer's bone structure.
O Since it is ruled by Mars, a person trying to control short-temper, aggression or quarrelsome nature may wear this stone.

O At Rudra Centre all the gemstones are pre-energized as per Vedic rituals and can be worn immediately, on the suggested specific right/left hand finger.