Sun God - The symbol of authority and high calibre

Sun is the principal celestial authority of all earthly and heavenly planets and sustains all living beings residing in them. Puranas describe the Sun god as having a divine body of gold along with a chariot pulled by his devout seven horses. Sun is considered to be very important according to Vedic astrology and it holds more importance than all the other astrological planets.

Being the prime source of light and energy, the Sun also plays a major role in deciding growth in career, mental strength and success of a person. Hence in order to lead a successful and stable life you may worship the Sun God. It is believed that the devotees of Sun God are blessed with leadership qualities, great calibre, bravery, strong will-power and authority. 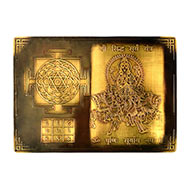 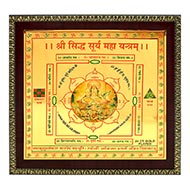 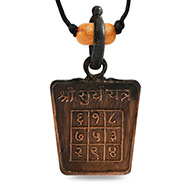 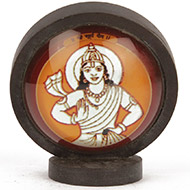 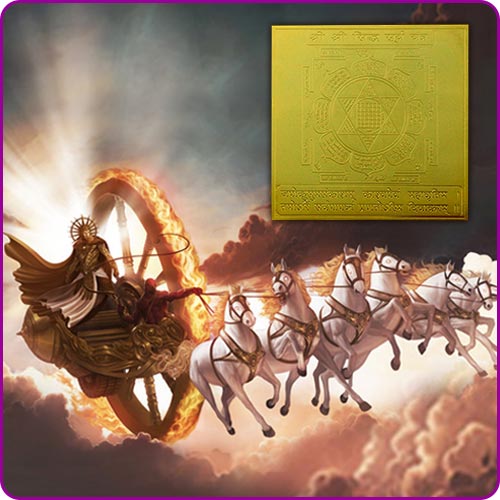 In order to gain fame, success and vigour in your life you can worship the Surya Yantra and install it in your homes and offices or even wear it as an ornament or amulet. The Surya Yantra is a sacred instrument that consists of a figure or symbol characterized by simple geometric forms arranged in a symmetric design that resonates with the powers and positive frequencies of Lord Surya. This mystical religion based diagram has the power to attract the principles of Surya God and carries the signification of its mantra and blesses the worshipper with leadership, brilliance and vigour.

Surya Yantra - An object of Meditation

This Yantra can also be used for meditating over Lord Surya. This will help in making you more focused and mentally stable. It will also aid in attaining union with God through geometric visualization. This Yantra is the window through which you can align with divine energy. Through resonance it connects you to the energy present in the macrocosm.

One must always pay attention while installing the Yantra, as it is very important to place the Yantra in the appropriate direction. Yantra energizes the location where it is installed. You may place it near the entrance of your home/office/shop or in your living room or reception or study room or office cabin. You may keep it on a table or use as a wall hanging. Yantra is best placed in the East direction facing west. It gets energised by the rays of the rising Sun and with the divine vibrations of the East corner and provides positive transformation energies to the dwelling through its mystical geometry.

The vibrations of the Yantra will create an aura of positive energy around you. Yantra are the ultimate answer for establishing a vibration of large amplitude or resonance with the benefic energies of the cosmos. Thus the vibration generated gets us in contact with highly elevated energies & entities which put us on a spiritual path resonant with the principles of the deity of that Yantra.

When you look at the Surya Yantra, you will notice certain symbols that are engraved or printed on it. These symbols include Padma (divine lotus), Shatkon (star shape or hexagon), Chakra (circle) and Bindu (point). The Padma (lotus petals) symbol according to all the Vedic scriptures as well as the scriptures of other faiths is considered to be a divine emblem of purity that resides in the chakras. A lotus in Yantra represents the unconditional force of the Supreme Absolute Truth i.e. detachment. The lotus serves as a divine seat for devas (gods). It grows in the mud but never touches even a tinge of mud, representing detachment to the external forces (material world) and maintaining the original nature which is pure and divine. The Shatkona represents an archetypal amalgamation of two triangles structured in all the Yantra. It characteristically signifies the divine unification of Shiva (Male energy) and Shakti (Female energy) which is the cause of all creation. The Chakra denotes rotation which is central to the functioning of the macrocosmic progression. At the same time, the circle signifies perfection and the peaceful creative void of the Vishuddha chakra. In the series of the five fundamental elements it represents the Air Element. Finally, the Bindu indicates the energy and its extreme concentration at the centre. It is also called the centre of cosmic radiation. Bounded by different surfaces such as a triangle, a hexagon, a circle, the bindu represents the union with the force or creative energy ruling the Yantra.

The Sun is referred to as Ravi or Surya in Vedic astrology. Lord Surya is also known as the “Atmakaraka” in Sanskrit, Atma meaning soul and Karaka meaning indicator. In Vedic astrology, the planet Sun stands for soul, will-power, eminence, the eyes, general vivacity, bravery, leadership, vicar, persons of high caliber and authority. Surya is associated with copper, gold, brass, gemstone ruby and wheat. One can also worship the Surya Yantra regularly, as it manifests the divine energies of planet Sun.