What is White Coral/Safed Moonga Gemstone

The White Coral is a lovely white colour gemstone very unlike other gemstones in composition as it originates from the deep Sea and is not made on the Earth crust. The White Coral gemstone is actually an hard outer shell(exoskeleton) of the soft marine organism called Polyp. The Coral reefs form when polyp attaches to a rock in the Sea-bed, and then buds and multiplies into thousands of clones and the Polyp calicles(which is an external skeleton made of limestone) join with one another and form a colony of Corals which keep growing across years. Different colours of Corals exist and the most popular ones are the Red Coral and the White Coral which have a lot of therapeutic benefits. The White Coral is composed of Calcium Carbonate. Its hardness rating is of 3 to 4 on the Mohs scale, which means it is not very hard. 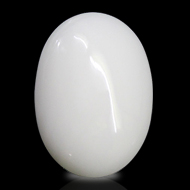 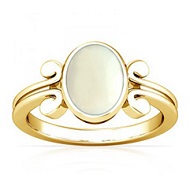 Coral has always been regarded to posses sacred powers. It is said that ancient Egyptians used White Coral/Moonga to ward off the evil spirits by placing them in the Tombs and Europe and Scandinavia to used it to ward off the evil. White Coral stone was used to protect from attack of pirates and 'sea monsters' in olden days. The Greeks and European Anglo-Saxons used to respect the effectiveness of the Coral. It was used to decorate weapons by the Norwegians. Trading of Coral between Indian and the Mediterranean coasts was also significant in ancient times.


White Coral for which planet?

As per Vedic Astrology the White Coral is connected with the planet Uranus.

Why to wear a White Coral gemstone?

The White Coral gemstone is well known for its medicinal properties and the powdered White Coral is used in alternate medicines. Worn as a jewellery, be it as a ring, bracelet, pendant or necklace, the White Coral stone benefits the wearer. 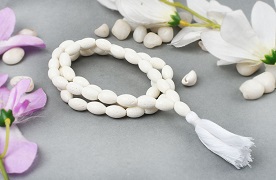 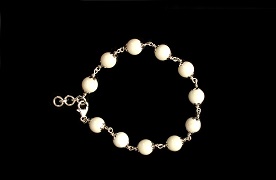 
Wearing a combination of Gemstone and Rudraksha is the best way to make the most of it. Rudraksha Ratna Science Therapy® (RRST®) devised by Neeta Singhal makes the use of both White Coral gemstone and Rudraksha beads. It is a holistic healing therapy that uses the curative and healing properties of Rudraksha and Gemstones to balance and energize chakras. In RRST we deal only with natural and un-treated gemstones. The reason Rudraksha Ratna Science Therapy is widely acclaimed by many is that it works on chakras, the very basis of life and is a holistic therapy that heals from deep within with absolutely no side effects. In RRST setting of a gemstone, as a ring or as a pendent, the 'Bhasm' made of the planetary herb is kept inside one tube and the metal that improves the planetary effects, is kept in another tube. In case of White Coral, Basil/Neroli Bhasm and metal Platinum are used to attract the cosmic power of Uranus. The gemstone is then energized with its precise seed mantra or Beej mantra on a specific day to empower it to eliminate all the malefic effects of the planet and reinforce its beneficial effects. Thus the gemstone becomes a powerful talisman suitable to be worn by any person irrespective of his birth chart.


During consultation, the blocked chakras that are causing the mental, emotional and physical issues are identified and limiting beliefs are addressed. Chakras become imbalanced when your thoughts and attitudes tend towards fears and negativity when facing challenging situations in life. Blocked Chakras manifest emotional disorders and physical ailments. It is only after blocked Chakras are balanced and activated that you can transform your life of suffering, obstacles, and confusions into love, success, and happiness. As per the chakra status and concerns of the client, a suitable combination of Gemstone and Rudraksha bead is recommended. As per the cosmic colour they emit, the gemstones work on specific chakras. White Coral works on Sahasrara Chakra or the Crown Chakra and the RRST Consultant identifies the correct finger position for drawing maximum energy from the stone. Rudraksha and Gems are powerful agents of energy and work on releasing the negative energy stored in the form of stress in the blocked chakras, thereby activating them and tuning them to their natural state.

Sahasrara Chakra or the Crown Chakra is the seat of “Light”; it signifies and governs our highest self and the door to the unconscious and subconscious. This chakra links us to the divine Sea of Light / the Kingdom of Light, out of which everything has emanated. This chakra is directly aligned to seek an intimate relationship with the Divine. It is the power of prayer, the intent. It is also our “grace bank account,” the warehouse for the energy we amass through kind thoughts, actions and acts of faith & prayer. It enables us to gain an intensity of internal awareness through meditation and prayer. This chakra represents our connection to the transcendent dimension of life. It is the primary route for liberation. Once this Sahasrara Chakra is realized, rebirth in the world of illusions is no longer necessary.

When this Sahasrara Chakra or Crown Chakra is blocked/imbalanced, people do not see the meaning of life, nor do they believe in the existence of the Divine. For them, life is just a coincidence, some molecules that came together and developed life on this planet. They feel no connection or guidance from a higher power and feel unworthy of spiritual help and abandoned by the Divine. One tends to suffer from migraine, tension, headaches etc.

A balanced Sahasrara Chakra makes you feel connected to a higher power. You feel the immense gratitude for the universal love and appreciation.

Hence proper functioning of all the chakras ensure appropriate energy flow to all body parts including our vital organs. Thus chakra cleansing and balancing is essential to enjoy good health and happiness which translates to overall abundance and wellbeing in every spheres of life. The purpose of Sahasrara Chakra is to attain self-knowledge and realize contentment and gratitude from within.

HOW TO CARE FOR YOUR WHITE CORAL GEMSTONES

Even though the White Coral Gemstone is quite durable, it isn't the hardest of minerals, so extra care should be taken towards it. The Stone should always be brushed with a soft cloth, and shouldn't be exposed to chemicals or detergents. Your Gemstone might routinely carry negative energies, and the pendant or ring can be detoxified by dipping it in water overnight. The Safed Moonga/Munga is sensitive to acid and heat. It should be handled with care and when not wearing it, the White Coral should be kept wrapped in soft cloth or in a soft pouch.

WHO CAN WEAR WHITE CORAL:

O A person feeling abandoned, lonely or finding no meaning in life can wear a White Coral for fulfilment.
O Best for spiritualists, Sadhaks and Meditators.

HOW TO WEAR WHITE CORAL:- METHOD / PROCEDURE OF WEARING:

At Rudra Centre all the gemstones are pre-energized as per Vedic rituals and can be worn immediately, on the suggested specific right/left hand finger.

Which finger to wear White Coral:

Wear White Coral gemstone on Index finger only for full results. Alternatively it can be worn wear as bracelet/pendant. It is mostly worn in Silver metal.

WHEN OR WHICH DAY TO WEAR WHITE CORAL:

It can be worn on Tuesday in the morning after bath. If need be, one may additionally chant the seed/Beej mantra “AUM” 108 times before wearing.