Goddess Baglamukhi: The symbol of protection, overall success and strength:

Goddess Baghlamukhi is the eighth goddess among the Dus Mahavidyas (wisdom goddess). The word Baglamukhi is derived from the Sanskrit words Bagla and Mukhi. The word Bagla, is the distortion of the original word Valga meaning bridle. Baglamukhi thus is believed to be the Goddess who holds the power to control and paralyze the enemies. Due to her divine powers She is also known as Devi of Stambhana. 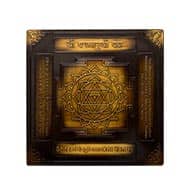 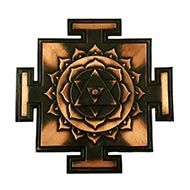 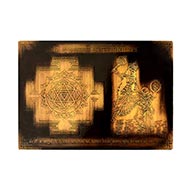 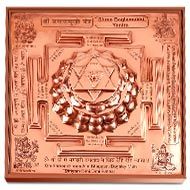 According to Svatantra Tantra, there was once a demon called Madanasura who had received a boon of 'Vaksiddhi'. On receiving the boon he started misusing it by troubling humans; he stimulated storms to kill people. On witnessing the destruction caused by the demon, the Gods ran to seek help from Lord Vishnu. Lord Vishnu started performing penances to appease Tripurasundari on the shore of a lake called Haridra Sarovar. Tripurasundari got appeased with Lord Vishnu's penance, and emerged as a deceitful Goddess called Bagalamukhi from Haridra Sarovar. Goddess Bagalamukhi first stopped the storm and then challenged demon Madanasura for a battle. She killed the demon by pulling out his tongue and breaking his skull with Her club.

According to the iconographic attributes as stated in the scriptures, the Goddess had yellow complexion, two arms and three eyes. Wore yellow clothes, gold ornaments and adorned a garland of yellow flowers. She also wore a crown of crescent moon crest jewel and Her body was anointed with turmeric paste. Goddess Baglamukhi as described also held a huge club in Her right hand.

In order to safeguard yourself from evil eyes and negative energies, you can install the Baglamukhi Yantra in your house, office or even wear it as an ornament. The Baglamukhi Yantra is a sacred instrument that consists of a figure or symbol characterized by simple geometric forms arranged in a symmetric design that resonates with the powers and positive frequencies of Goddess Baglamukhi. This mystical religion based diagram has the power to attract the principles of Goddess Baglamukhi and carries the signification of a mantra or process. This powerful Yantra resonates with the positive energies of the Goddess and blesses the worshipper with success, wealth and positivity

Baglamukhi Maha Yantra is used for power & dominance over enemies. Baglamukhi Yantra is very powerful and useful Yantra for victory over enemies, law suits, success in quarrels and competitions. Goddess Baglamukhi who is the presiding deity of this powerful Yantra charges it with occult forces. The worship of this Yantra is performed in a particular star and moment when there is maximum power generated from the planet MARS, by wearing yellow dress, on yellow asana, with yellow flowers and yellow beads.

This Yantra was traditionally drawn using Turmeric or Dhatura flowers juice on a piece of Bhojpatra and worshipped to attain success. The Yantra is now engraved on copper plates and silver/gold plates. Baglamukhi Yantra is very effective to ward off the evil effects of souls and Yakshani also to get success in gambling. Baglamukhi yantra is effective as a memo of achieving success over enemies.

This Yantra also offers protection for cuts, scars, operations and accidents. Any person using this Yantra during a court case will gain success. This is practical use of this Yantra. It is well tested by many people. After pran pratishta, Yantra shall be placed at in house alter, on the wooden chowki (table). Cover this chowki with yellow asana and then install the Yantra on it. The puja be performed after bath every Tuesday. Take the water in right hand, recite the Baglamukhi beeja mantra 108 times and sprinkle water on Yantra; your all wishes would be fulfilled.

Baglamukhi Yantra: An object of Meditation

This Yantra can also be used for meditating over Goddess Baglamukhi. This will help in making you more focused and mentally stable. It will also aid in attaining union with Goddess through geometric visualization. This Yantra is the window through which you can align with divine energy. Through resonance it connects you to the energy present in the macrocosm.

One must always pay attention while installing the Yantra, as it is very important to place the Yantra in the appropriate direction. Yantra energizes the location where it is installed. You may place it near the entrance of your home/office/shop or in your living room or reception or study room or office cabin. You may keep it on a table or use as a wall hanging. Yantra is best placed in the East direction facing West. It gets energised by the rising rays of the Sun and with the divine vibrations of the East corner and provides positive transformation energies to the dwelling through its mystical geometry. The vibrations of the Yantra will create an aura of positive energy around you.

Yantra are the ultimate answer for establishing a vibration of large amplitude or resonance with the benefic energies of the cosmos. Thus the vibrations generated get us in contact with highly elevated energies & entities which help us attain spiritual course of conduct in our daily lives & enhance the spirituality within.

When you look at the Baglamukhi Yantra, you will notice certain symbols that are engraved or printed on it. The design on the Yantra consists of bindu that is carved inside the inverted triangle. The inverted triangle or trikona is surrounded by a hexagon or star shape known as shatkona which is surrounded by circle. The circle shape is surrounded by shape of the lotus petals. The lotus petals are again enclosed inside a circle which is again surrounded by lotus petals which have small petal carvings on them. The Bindu indicates the energy and its extreme concentration at the centre. It is also called the centre of cosmic radiation. Bounded by different surfaces such as a triangle, a hexagon, a circle, the bindu represents the union with the force or creative energy ruling the Yantra. The lotus petals symbol is known as the Padma (divine lotus). A lotus in Yantra represents the unconditional force of the Supreme Absolute Truth. The lotus serves as a divine seat for devas (gods). It also represents detachment. It grows in the mud but never touches even a tinge of mud, representing detachment to the external forces (material world) and maintaining the original nature which is pure and divine. The circle also known as the chakra stands for rotation which is central to the functioning of the macrocosmic progression. At the same time, the circle signifies perfection and the peaceful creative void of the Vishudha chakra. In the series of the five fundamental elements it represents the Air Element. The Hexagon also known as the Shatkona is an archetypal amalgamation of two triangles structured in all the Yantra. It characteristically signifies the divine unification of Shiva (Male energy) and Shakti (Female energy) which is the cause of all creation and the triangle also known as the Trikona is the emblem of Shakti, the absolute female energy of the Divine. It completes the creation or manifestation of both, material as well as spiritual worlds. The triangle pointing down characterizes the Yoni which is the source of all creations. A triangle pointing downwards represents the Water Element for water flows down. Water Element represents Shakti 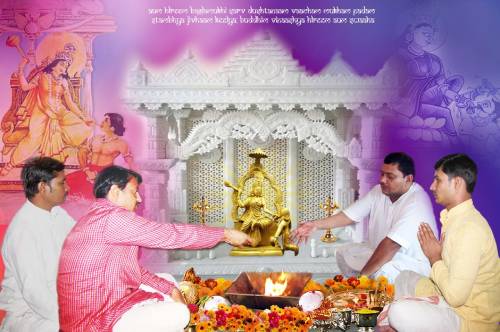