Ramraksha: The symbol of overall protection, riches and success 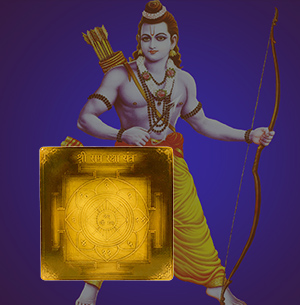 In order to attain peace, prosperity and protection from all kinds of evil forces and enemies you can worship the Ramraksha Yantra. Believed to be an incarnation of Lord Vishnu, Lord Rama was also known as Maryada Purshottam. Lord Rama was born to king Dashrath. Lord Rama defeated the Ravana, who was known for His evil powers. Thus, this Yantra is known to bless the worshipper by promoting victory over all enemies and evil forces. It is said that any person who dedicates himself to Lord Rama is bestowed with peace, happiness, contentment and satisfaction. This Yantra protects the worshipper from troubles, enemies, obstacles, diseases and dangers by working as a shield thus, paving a path to all round prosperity, protection, luxuries, glorious success and fame.

You can install the Ramraksha Yantra in your house, office or even wear it as an ornament. The Ramraksha Yantra is a sacred instrument that consists of a figure or symbol characterized by simple geometric forms arranged in a symmetric design that resonates with the powers and positive frequencies of Lord Rama. This mystical religion based diagram has the power to attract the principles of Lord Rama and carries the signification of a mantra or process. This powerful Yantra resonates with the positive energies of Lord Rama and blesses the worshipper with power, wisdom, all round protection and prosperity.

RamrakshaYantra: An object of Meditation

This Yantra can also be used for meditating over Lord Ram. This will help in making you more focused and mentally stable. It will also aid in attaining union with God through geometric visualization. This Yantra is the window through which you can align with divine energy. Through resonance it connects you to the energy present in the macrocosm.

One must always pay attention while installing the Yantra, as it is very important to place the Yantra in the appropriate direction. Yantra energizes the location where it is installed. You may place it near the entrance of your home/office/shop or in your living room or reception or study room or office cabin. You may keep it on a table or use as a wall hanging. Yantra is best placed in the East direction facing West. It gets energised by the rising rays of the Sun and with the divine vibrations of the East corner and provides positive transformation energies to the dwelling through its mystical geometry. The vibrations of the Yantra will create an aura of positive energy around you.

Yantras are the ultimate answer for establishing a vibration of large amplitude or resonance with the benefic energies of the cosmos. Thus the vibrations generated get us in contact with highly elevated energies and entities which help us attain spiritual course of conduct in our daily lives and enhance the spirituality within.

When you look at the Ramraksha Yantra, you will notice certain symbols that are engraved or printed on it. The lotus petals symbol is known as the Padma (divine lotus). A lotus in Yantra represents the unconditional force of the Supreme Absolute Truth. The lotus serves as a divine seat for devas (gods). It also represents detachment. It grows in the mud but never touches even a tinge of mud, representing detachment to the external forces (material world) and maintaining the original nature which is pure and divine. The square or the Bhupura represents the Earth Element that resides in the physical self. Yantra start with the dot and end with the square. It implies the way the cosmos evolves. It begins with the subtle energies at the centre, with granular at ether and then culminating in earth. The circle or the Chakra stands for rotation which is central to the functioning of the macrocosmic progression. At the same time, the circle signifies perfection and the peaceful creative void of the Vishudha chakra. In the series of the five fundamental elements, it represents the Air Element.

This Yantra protects the worshipper from all sorts of difficulties, destroys all the evils and curses. In order to get rid of all perils and obstacles that are hindering your success and blocking your way to gain prosperity, fame and luxuries you can worship the Ramraksha Yantra. This Yantra is known to remove all troubles that create imbalance in the house. It also promotes peace and harmony. The Ramraksha Yantra can be installed in your dwelling on either a Tuesday morning or on a Thursday morning. This Yantra is sure fill the devotee with positive vibrations and enables the healers to strengthen their ability to transfer healing prana.