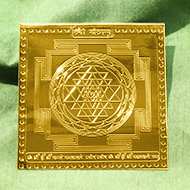 Yantra literally means "Loom, "Instrument or Machine". In actual practice a Yantra is a symbolic representation of aspects of divinity, usually the Mother Goddess. It is an interlocking matrix of geometric figures, circles, triangles and floral patterns that form fractal patterns of elegance and beauty. Though drawn in two dimensions, a Yantra is supposed to represent a three dimensional sacred object. Three-dimensional Yantras are now becoming increasingly common.Â

Although the Yantra is primarily a meditation tool both for serious spiritual seekers as well as sculptors in the classical tradition, its Shakti is also available to new seekers with sincere devotion and good intention. Before creating Yantric artefacts in wood, stone or metal, they draw a Yantra that represents attributes of the god or goddess they wish to sculpt, etch or create. Intense meditation upon it causes the fully formed image to leap into the mind's eye with remarkable intensity with imprinting ability. In some cases, traditional Yantra-makers do not need to make a sketch before creating the image.

Yantras are often mistakenly thought to be symbols purely of the manifold aspects of the Mother Goddess.

This is an understandable error as most Yantras are indeed connected to the Goddess, the most famous being the Sri Yantra, an abstract representation of the Mother (and Father too!) as Cosmos.

The Sri Yantra is also commonly misunderstood to represent Lakshmi, the Goddess of Fortune but it is more true to say the Sri Yantra includes and transcends every notion of divinity ever conceived of the pantheons of deities relating to the Sanatana Dharma.

However, there are Yantras for male deities such as Lord Ganesha and Lord Kubera but they share a common Yaksha origin with Goddess Lakshmi. The Yakshas were original chthonic deities of India and Yantra systems seem to have been incorporated into the Vedic worldview at a later stage.

Within the body of more complex Yantras, monosyllabic mantras, the Beeja or "Seed" mantras are inscribed to constitute the subtle forms of respective Gods and Goddesses. Most designs often focus attentive detail upon the center of Yantras usually a dot or Bindu which is the Locus Mundi, the center of all things and represents the unmanifested Potential of all creation. Other figures usually symbolize various stages within the unfolding of creation. Thus, every Yantra is a symbolic representation of both the deity as well as the universe. The Mother Goddess not only permeates the substance of the universe, but is literally the Universe itself.

Abstract geometric are representations of the universe that do not represent a deity, are called Mandalas. Every Yantra is also a Mandala, though not all Mandalas are Yantras. In ancient texts, Lord Shiva is supposed to have explained the mystical meaning of the Yantra to his consort, Goddess Parvati:Â "The Yantra is as essential to a god as oil is to the oil lamp or as a body is to a living human being".

Yantras are constructed with observing immutable laws of sacred geometry, being symbolic representations of energy patterns of a deity and rank amongst the most powerful 'centering' devices for harnessing divine energies. The Yantra is actually more powerful than a picture of a God which, to be energized, requires a Yantra to be affixed at its base or back.

A Yantra always contains a Mantra associated with it. Just as the mind is a part of, yet different from the body, so is the Mantra from the Yantra. The Mantra is the mind consciousness while the Yantra is the form of the deity.