Maa Kalratri is worshiped on Navratri seventh day puja to destroy the agony of negative/paranormal influence from the life of mankind. On the 7th day of Durga puja, Saptami fast is observed by devotees to please Maa Kalratri. Tantra-mantra practices are also performed and accomplished under the blessings of Maa Kalratri. It is an important night for people who are involved in Tantra Sadhana. Meditating on Maa Kalratri is best done at night. She benevolently blesses sincere and pure prayers of Her devotees.

A short Video of the Sankalpa and mantra chanting would be sent to you along with the photographs of the Puja ritual. You may connect with the priest during the puja (video or phone call) on WhatsApp or Skype and watch the rituals live. Puja Tokri having prasad, energized Rudraksha, silver tabeez and Durga yantra would be sent along. Rudra Centre priests will perform Kaalratri Puja as per Vedic rituals based on birth details. Please mention your birth details (name, date, place, time), & Sankalp (your wish) at checkout. This is an individual Puja (you may do puja on individual name or include your near and dear ones in the puja).
About Maa Kalratri

The Navratri festival is an opportunity for devotees to invoke and worship 9 powerful 'Swarup' / manifestations of Maa Durga or Maa Parvati. The Navratri seventh day puja is in honor of Maa Kalratri, the 7th embodiment of Maa Durga. Maa Kaalratri means the One whois "the Death of Kaal", here 'Kaal' is time & death and 'Ratri' means night. Kali, Bhadrakali, Mahakali are synonyms of Maa Kalratri. Kali Maa is the most commonly known as the glorification of Maa Kalratri.

Maa Kalratri is the destructive force that is said to destroy ghosts, Demons, evil entities or spirits, and all negative energies. She is believed to be the most violent form among the Navadurga but She is always auspicious in effect. In appearance, She is the fiercest among the Divine Mother forms. Maa Kalratri has dark Krishna (black) complexion, Her long black hair is always left loose and wild, Her bloodshot eyes are wide open, Her Red tongue hangs out of Her blood-smeared mouth. She wears a bead that gleams like fire. Maa Kalratri is also depicted to be wearing a garland made of heads/skulls, a string of hands around Her hip. Maa Kalratri has four arms, in Her upper left hand, She holds a cleaver/ Kharga and in the lower left hand a Thunderbolt. Her upper right hand is in Vardamudra and her lower right hand is in Abhaya Mudra. Donkey is the vehicle of the magnificent Maa Kalratri.

Maa Durga manifested Herself into Maa Kalratri’s form to eliminate the demons, Shumbha and Nishumbha from existence. Raktabij or Raktabeej, a ferocious demon, whose every drop of blood made a clone of him, challenged Maa Kalratri during this time. The Divine Maa Kalratri drank all his blood and all his clones to put an end to him. Shumbha and Nishumbha, Chanda and Munda were eliminated and She went on a rampage. Her extreme violent appearance while destroying Raktabeej and other demons hugely terrified the bravest of hearts and organisms of the Universe.

Maa Kalratri is like a dark night for demons. To all those who fear Maa Kalratri, She can appear as fearful energy but actually She wants everyone to let go of all fears and anything which is Ego based. She brings into awareness the truth of death, decay, destruction, sorrow into the forefront and urges devotees to align with the truth. In spite of Her appearance and attitude, Maa Kaalratri is an auspicious power, who blesses everyone with 'Shubh' energies and because of this quality, Maa Kalratri is also known as Goddess Shubhankari. 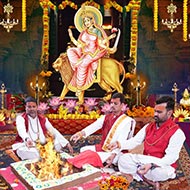 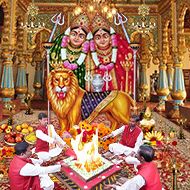 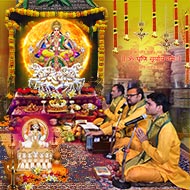 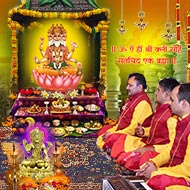 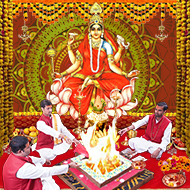 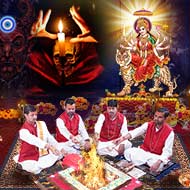