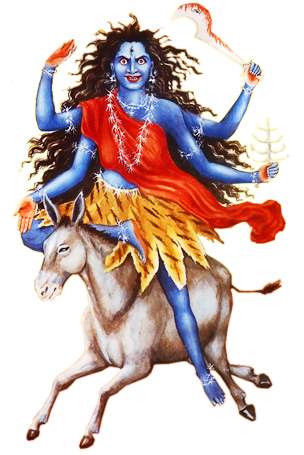 Worship of Goddess Kalratri Mata on the Seventh Day of Navratri

Durga takes her 7th form which is Maa Kaal Ratri. Kaalratri is the one of the fiercest forms of Durga and her appearance itself evokes fear. This form of Goddess is believed to be the destroyer of all demon entities, ghosts, spirits and negative energies, who flee upon knowing of her arrival. Kaal Ratri means the One who is "the Death of Kaal". Here Kaal is dedicated as time & death and ratri means night. Kaal Ratri is the one who destroys ignorance and removes darkness of birth, so that the devotee merges into the supreme consciousness with destruction of the darkness of ignorance. In this form, she killed the demons named Shumbha and Nishumbha.

Shumbha and Nishumbha once invaded the abodes of the gods in order to attack and defeat them. Indra sought Lord Shiva's help in taking back their kingdoms. They all prayed to Goddess Parvati who was bathing. She meditated on and called her another form Chandi (Ambika) to assist the gods by vanquishing the demons.


Meanwhile, Chanda and Munda the generals of Shumbha and Nishumbha came to disturb the gods again. Goddess Chandi blessed by Parvati created a dark goddess Kali to kill those generals. Kali quickly killed them, gaining the name Chamunda (killer of Chanda and Munda).Hearing the death of Chanda and Munda, Raktabeej arrived to take revenge. He had a boon that a drop of blood from his body spilling into the ground would create his clone equally strong.

It was now impossible to kill Raktabeej. Kali (Kaalratri) made countless attempts to kill him but from his blood drops many more emerged. In a rage, she started drinking his blood to prevent it from dropping on the ground. Then his commanders Shumbha and Nishumbha arrived. They began battling with Chamunda.

Kali soon raged and went berserk in killing whoever came in her way. Both the commanders were killed. Sacred to death, the gods prayed to Shiva to calm her down. Soon Shiva appeared before Her and lay down to get run over by her feet. Seeing her beloved husband beneath her foot, she felt embarrassed and bit her own tongue. She stopped and fell unto the feet of Shiva.The complexion of Maa Kalaratri is like dark night with bountiful hair and heavenly shaped form, and, she has four hands. The left two hands holds a cleaver and a torch, and the right two are in the mudras of "giving" and "protecting". She wears a necklace that shines like the moon. Kalaratri has three eyes which emanate rays like lightning. Flames appear through her nostrils when she inhales or exhales. Her mount is the donkey.

The appearance of Maa Kalaratri can be seen as being very dangerous for evil-doers. But she always bears good fruits for Her devotees who are not afraid of Her. Her devotees should avoid fear when facing Her, for She removes the darkness of worry from the life of Her bhaktas or worshipers. Her worship on 8th day of Navratri has very much a high importance to Yogis and Sadhakas. Yogis and Sadhakas penance on Sahasrara Chakra on this day; for the worshipers the door opens for every siddhi, power and practice in the universe.

This form of Goddess Parvati is the fiercest and most violent amongst all forms. It is believed that Parvati removed Her golden skin to slay the demons Shumbha and Nishumbha, and came to be known as Goddess Kalaratri. The complexion of Kaalratri is black and Her mount is a donkey. She is shown with 4 hands. In Her left hands She holds a sword and an iron hook. Even though She is ferocious, She blesses the devotees with Her right hands which are in the Abhaya and Varada Mudra. Kalaratri can also be spelled as Kalratri or Kaalratri.


The seventh night of Navratri begins with worship of Kaalratri which is performed by using sacred puja items. The devotee uses a shallow pan like utensil made of clay as base. Three layers of mud and Sapta Dhanya/Navadhanya (grains) seeds are poured into the pan. The next is a little water is sprinkled so that seeds get enough moisture. A Kalasha (holy water pot) filled with Ganga jal, Supari, a few coins, Akshat (raw rice mixed with turmeric powder) and Durva grass is placed in the base. Then the five Mango tree leaves put around the neck of the Kalash which is then covered by a coconut. Read more.