Birthstones are popularly used in jewellery and are associated with the month of a person’s birth. The properties of these stones are believed to suit the characteristic features of the people born at a specific time period and can help enhance their energies and offer several benefits. When looking for birthstones by month, it is important to buy only clean and clear-cut stones of high quality.

The January birthstone is a deep-red garnet. The word garnet has its origins in the Latin word ‘granatus’ which means seed. It is believed that the smaller stones resemblance to pomegranate seeds led to its name.

Garnets are clusters of silicate minerals which differ in composition based on the area of formation. Additionally, they also have varying degrees of colour and transparency. The garnet birthstone is highly loved by several people as it is said to possess positive and healing energies. Not only does it help elevate certain positive energies but keeps one grounded and is also known to help align and balance certain chakras. 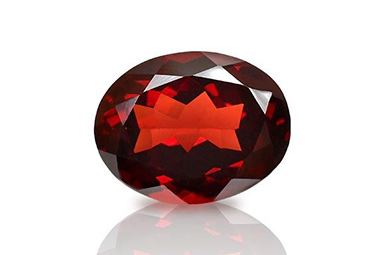 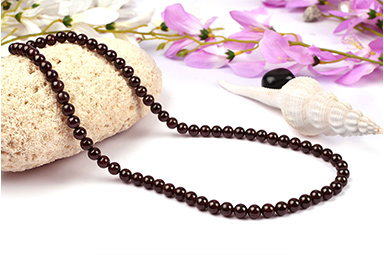 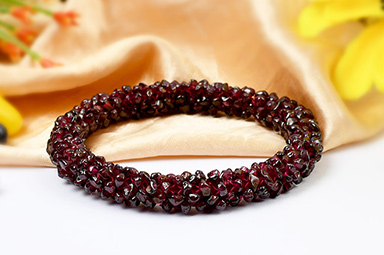 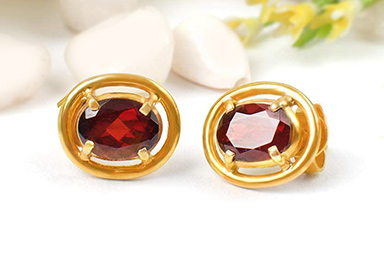 
History and Mythology Associated With Garnet

The garnet birthstone has been a popular choice for people since ancient times. Along with its visual appeal, this stone has been highly regarded for its beneficial properties which have given it a prominent place in history and mythology.

Certain warriors used garnet for its protective element while others used them as weapons due to their strength and hard nature. This birthstone ring was also commonly worn by healers as they believed the garnet possessed medicinal and healing abilities against wounds and infections.

People used garnet to heal fever, protect against poisons as well as for mental health concerns such as depression.

Garnets are typically associated with a deep red colour. However, due to the differing chemical compositions, there are over 20 varieties of garnet. Other popular colours of this stone include orange, green, brown, yellow, purple, and black.

The red colour of the birthstone is also helpful in balancing and energising the root chakra. This chakra is located at the base of the spine and is associated with a person’s basic needs and creating a sense of grounding and security in their life. Additionally, this stone also promotes feelings of love, compassion, and self-confidence.

The green and orange-gold garnet stones have also been used to align the heart chakra and sacral chakra respectively. However, for people born in January, a deep red garnet stone is recommended.

Where is January Birthstone Garnet Found?

This gem for January is sourced from a wide array of countries. Red pyrope garnets, which were a showstopper during Victorian times were found primarily in Bohemia. Coming to modern times, the African continent serves as the storehouse of most of the world’s garnet. While Namibia currently produces demantoids, a lion's share of the bright green tsavorites in the market is sourced from Tanzania, Kenya, and Madagascar. The rich orange-to-yellow spessartine garnets are produced in Namibia and Tanzania. The Little Three mining region of Southern California was accredited for producing this enticing gem for many years. You can also find this January birthstone in Brazil, Myanmar, Afghanistan, Iran, India, Pakistan, and Sri Lanka, among other countries.

Garnet has been associated with numerous characteristics and qualities that have made it a popular choice for many people. In the earlier days, they were commonly used by royalty as they were associated with power and wealth. Even today, the January gemstone is said to bring in wealth and prosperity.

Additionally, garnet is also associated with enhancing energy, stamina, success, and luck. Traditionally, this exquisite birthstone was also known to be protective of the wearer and allow for their safety. This was another reason garnet was used by warriors and travellers.

However, there are several aspects to be considered when choosing a stone. While a birthstone may seem like an ideal choice, it should be considered in relation to other factors of your life such as health concerns, personal characteristics, and current phase of life.

Garnet is a natural inert 12-sided crystal having hardness between 6.5 and 7.5 on Mohs scale. They contain higher concentrations of manganese and/or paramagnetic iron which adds to their magnetic properties. The calcium garnets are green in color and have a lower specific gravity compared to the red iron and manganese garnets.

Using Garnet to Enhance Your Energy

The philosophy of buying birthstones by month is a popular jewellery choice for several people. For those born in January, a radiant red garnet can work wonders to elevate energy, enhance self-confidence, and bring in wealth.

There are numerous ways to bring in the protective and healing energies of this stone into your daily life. The stunning red colour makes garnet a lovely gemstone for various types of jewellery. Not only does it elevate your outfit but also catches the eye instantly.

Wearing a January birthstone jewelry induces an array of benefits that are not limited to a January born. It has gained popularity as an energy enhancer, a good luck talisman, and as protection from negative energy. Let’s take a look at some of its inherent benefits:

Garnets come in different varieties and most of them vary between 6.5 and 7.5 on the Mohs scale of hardness. This attribute makes them highly vulnerable to damage compared to diamonds, rubies, and sapphires. Most garnets are not suited for being worn daily but can add to your elegance in the form of brooches, earrings, and pendants.

You need to be especially careful about its storage. Given the inherent soft nature of garnet, letting them rub against harder gems like diamonds can result in scratches. Garnet can also scratch softer gems such as pearls or opals.

The garnet stones are usually not treated. In rare cases, the garnets might be fracture-filled wherein a glass-like substance is inserted into the surface-reaching breaks to improve the gem’s clarity. These treated stones have special care requirements.

The red garnet gemstones often carry negative energy and need to be detoxified by dipping it in water overnight. Ultrasonic cleaners also serve as a viable option for garnet stones except for the ones which have been fracture-filled or have fractures. It is not recommended to carry out steam cleaning of this January gemstone.

How to Re-energize and Recharge your January Birthstone Garnet?

At Rudra Centre we energize every item before shipping it our customers then they can start wearing and experiencing the benefits immediately. After prolonged usage one may wish to recharge or reenergize their stone to remove all the negativity so it can work to its full potential.

To reenergize or recharge January Birthstone Garnet you can keep it under cold running water for a few minutes and then keep it under sunlight for 3 - 4 hours. After this you can follow the steps mentioned below

While doing the above process you can chant the Mantra “OM” or “AUM”.

Most people think that using a birthstone is perfect based on their month of birth. However, it is not necessary to wear only your birthstone. In fact, you can wear any gemstone regardless of your date of birth, horoscope, and zodiac sign.

You can get your Garnet jewelry from Rudra Centre which only deals in Vedic Astrology approved non treated and non-heated garnet gemstones which can guarantee the best results to the wearer.

What is important is that you wear the right stone for you as per Rudraksha Ratna Science Therapy (RRST) which has been devised after 20 years of research and has its base in the chakras of the human body. Chakra Therapy via RRST is the fastest healing therapy and is more comprehensive and superior to other healing modalities. To book a consultation with our expert.
Click Here

For more details about the free consultation or to discuss concerns relating to health, career, and relationships, please reach out to us via the following: