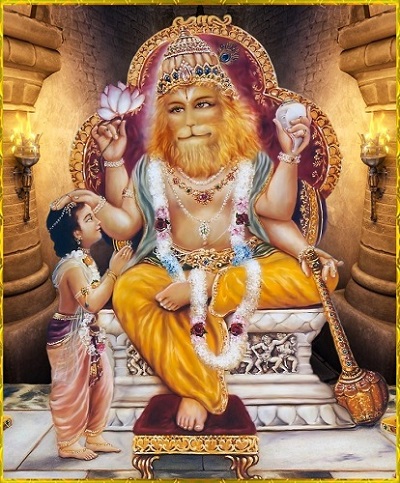 WHAT IS NARASIMHA JAYANTI?

Narasimha Jayanti on Vaishakha Shukla Chaturdashi marks the birth of Lord Narasimha, the Fourth Avatar or Incarnation of Lord Vishnu as half-man and half-lion who descended to vanquish the demonic King Hiranyakashapu. The fierce avatar of Lord Narasimha had manifested to save His ardent devotee, Prahlada from Hiranyakashyipu who had plans of killing him. The Lord always protects His devotees and Lord Narasimha served that mission. He wanted to put an end to the evil Hiranyakasyipu and in the most creative manner destructed the demon for ever.

WHEN IS NARASIMHA JAYANTI 2022?

As this day is celebrated on the birthday of Lord Narasimha, it represents the victory of good power over evil forces. Lord Narasimha protected His devotee Pralhad from a burning fire and it shows how powerful God is. Worshipping Him on Narasimha Jayanti blesses an individual with His protection, safeguards from any mishaps, and solves problems related to legal matters. 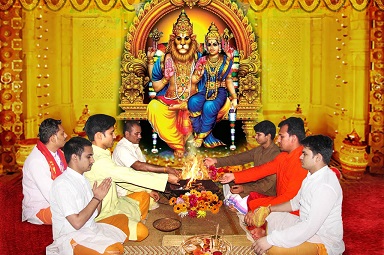 Narasimha is an avatar of Lord Vishnu, whose consort is Lakshmi. Vishnu took the avatar of Narasimha which is a half-man and half lion to save His devotee Prahlada. He is seen with a human torso and lower body, with a lion face and claws, and with a demon Hiranyakashipu in his lap whom he is in the process of killing. Hiranyakashipu gained special powers by which he could not be killed during the day or night, inside or outside, by God, demon, man, or animal. Knowing this, Vishnu took the half-man, half-animal form in which he is neither man nor animal and kills the demon at the junction of day and night, inside and outside.

Benefits of this Puja:
● To overcome debts, financial difficulties, and relationship issues
● For wealth and fulfillment of intentions
● For protection against diseases and ailments
● For success in court cases and legal matters
Click to Participate

On the occasion of Narasimha Jayanti on 6th May, Rudra Centre Puja Services performed Laxmi Narasimha Puja and Yajna on 6th May with the recitation of Lakshmi Narasimha Kavach, Ashtottara Namavali, Mantra Japa 21,000 times and Homa for showering their blessings of prosperity and abundance and for protection against diseases and ailments.

FASTING: WHAT TO DO ON NARASIMHA JAYANTI, LORD NARASIMHA PRAYERS BENEFITS

Vaishakha Shukla Chaturdashi with Swati Nakshatra is extremely auspicious to observe Narasimha Jayanti Vratam. Just like on Ekadashi, one should have a single meal on the day prior to Narasimha Jayanti. One should not eat anything prepared with grains and cereals. Breaking of the fast is to be done on the next day of the Jayanti.

LORD NARASIMHA AND MEANING OF HIS NAME 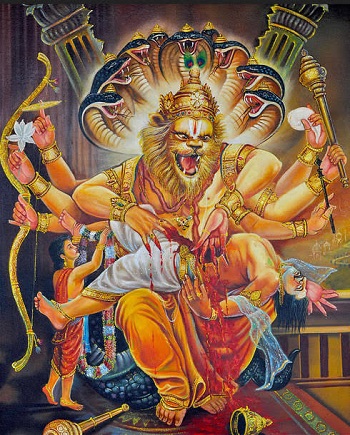 Prahlada was the son of Asura (demon) King Hiranyakashyipu, who used to make a victim of anyone who dared to follow or invoke the Divine God. From the time of birth, Prahlada showed signs of being a devotee of Lord Vishnu. For Prahlada, Lord Vishnu was the center of His Universe which was not acceptable to King Hiranyakashyipu and made several attempts on his own son's life. But every time Prahlada was saved by the Lord.

In desperation, Hiranyakashyipu connived with his sister Holika and tried to kill Prahlada by burning Him. However, the plan failed as in this situation too Prahlada remained unscathed, while Holika burnt to death. Hiranyaksyipu had been bestowed with a boon from Lord Brahma of being invincible, that no living or inanimate weapon could kill him, he could not be killed during the day nor night, he could not be killed by man/human or any animal, and that he would not be killed inside nor outside his residence. After Prahlada was saved, Lord Narasimha appeared to finish Hiranyakashyipu. The form of half- man-half-Lion was taken by Lord Vishnu because of the conditions of Hiranyakashyipu's boons of invincibility. The demon king was killed by Lord Narsimha with His claws. 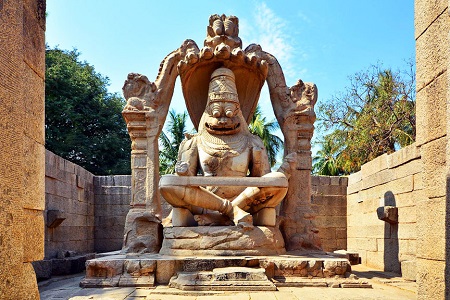 The Rigveda mentions a creature that is described as a 'wild-beast, mountain prowling' which is assumed to be Lord Narasimha. The Namuchi legend mentions Lord Indra killing Namuchi, where parallels of Lord Narasimha's story is found.

Legend of Namuchi: Lord Indra is referred to in Hinduism as the King of the Gods and the Lord of the river, thunder, rain. Namuchi was an Asura/demon who was in a power-play with Gods. However, Namuchi and Lord Indra called for peace and Namuchi demanded certain conditions. The conditions being that Namuchi could not be killed by Lord Indra's palm or fist, during night or day and that nothing dry or wet would be able to kill him and Lord Indra promised all this. But the cunning Namuchi steals the elixir Soma, all the strength of Lord Indra.

This put Lord Indra in a dilemma as He had given word to Namuchi, so He approached Goddess Saraswati and the Ashvins (twin sons of Surya and physician of Gods). They agree to help Lord Indra but want the Soma, nourishments, and powers to be shared with them, once it is all retrieved from demon Namuchi. When Lord Indra agrees, an innovative plan to slay Namuchi is drawn and a 'foam of water' is poured as a thunderbolt and Namuchi is killed with it, keeping the promise of neither wet nor dry weapon and the attack on Namuchi is done when it is neither day nor night, that is assumed as twilight. All that Namuchi had stolen is got back. However, as Namuchi had drunk the Soma and it had mixed with his bad blood, the Gods extracted it from the bad therefore separating the good from the evil.

It is derived by scholars that there are similarities between Lord Narasimha story and the legend of Namuchi, especially in the terms and conditions laid down by demon Namuchi and demon King Hiranyakashyipu.

Among the Puranas, the Ramayana, Vishnu Purana, Shiva Purana, Harivamsa and other Puranas mention the Narasimha avatar of Lord Vishnu. The Mahabharata also has Lord Narasiimha references. 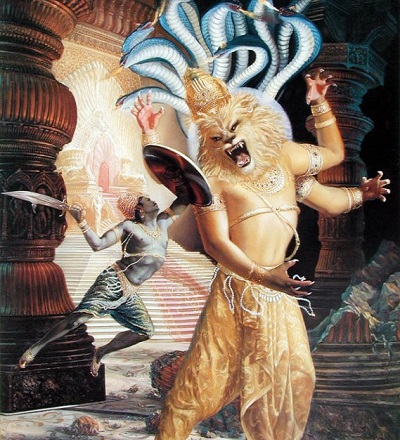 Shrimad Bhagavatam or the Bhagavata Purana describes the pastimes of Lord Narasimha, and Prahlada Maharaja, son of the demonic King Hiranyakashipu of Multan, a region of present-day Punjab. Prahlada was a great devotee of Lord Vishnu. The King had always held grudge against Lord Vishnu who had killed his brother, Hiranyaksha. Therefore, the King also despised his son Prahlada. It is not that the King always hated him since the beginning. He wanted to have his son receive the best of education under proficient teachers Sanda and Amarka.

The teachers tried their best to educate him in the field of politics, economics, architecture, and other sciences but Prahlada was absorbed in the Hari Bhakti, devotion to the Lord Hari (Vishnu or Krishna). Despite many attempts when the teachers failed, the King chastised them. When they informed him about other students listening to him, the King got angry. He kept his anger under control affectionately asked Prahlada who was in his lap: ‘Son, where did you learn this Vishnu Bhakti?’ To which the son said: “those who are attached to family life do not develop prema (love) for Lord Vishnu, either personally or collectively. Instead, they suffer repeated birth and death in this material world and continue simply chewing the chewed. The duty of every man is to take shelter of a pure devotee and thus, become eligible to understand the Lord”.

The King who wanted to be worshiped as God despised his son Prahlada, the ardent devotee of Lord Vishnu. He tried to get him killed in many ways but failed. Finally, he told his evil sister Holika to kill Prahlada by setting him on a pyre. Holika who tried to burn Prahlada was herself devoured by the fire burning her to ashes. Later the King asked his son that if God is great, where is He? Does He live in these columns of my palace? Prahlada said, “Yes He lives everywhere. The King then laughed at his reply. And then all of a sudden there was a tumultuous sound as Lord Vishnu in His Narasimha avatar emerged out of the columns and killed the self-proclaimed King!

Lord Narasimha is an important symbol of hope, triumph over oppression and ill-treatment, innovative ways of resistance, eradicating evil forces, and destruction of the inner and outer demon/evil.

The iconography of the Narasimha avatar of Lord Vishnu is very popular in the Southern states of India with statues and paintings of the Lord.

In Lord Hanuma's form of Panchmukhi (5 faces) Lord Narasimha's face is one. Lord Hanuman is an ardent devotee of Lord Rama, an avatar of Lord Vishnu.

The Gupta Empire had coins with Lord Narasimha image, perhaps the intension of the Gupta kings were to project that their rule follows Lord Narasimha and like the Lord does, they destruct the evil.

The Indian classical dance forms like Kathakali have been performing the Lord Narasimha- Hiranyakashyipu story since ages as it is dramatic. Tamil Nadu celebrates Narasimha Jayanti by conducting drama performances of the Lord Narasimha story in temples.

Meaning: May Lord Narasimha who is highly ferocious and brave and the emanation of Lord Maha Vishnu, full of effulgence, terrific and auspicious and the death of death blesses us as we bow down to Him.

HOW TO CELEBRATE NARASIMHA JAYANTI?

One can visit their nearest Vishnu temple and also worship Lord Narsimha at home. Usually, Lord Narasimha and Goddess Laxmi is invoked together to seek their Divine grace. Performing the puja as per proper rituals bestows the worshipper with protection and abundant blessings of Lord Narasimha and His consort Lakshmi. 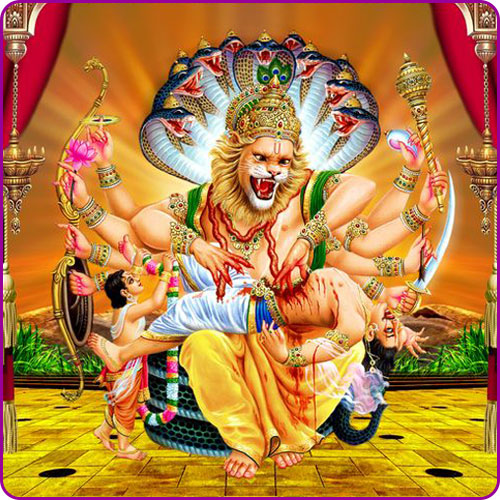 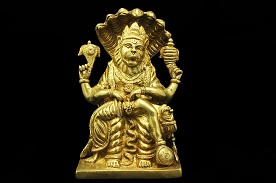 An elegantly created brass idol of Lord Narasimha Dev killing Hiranyakashipu. Best gift for your near and dear ones. 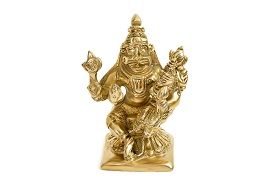 An elegantly created brass idol of Lord Narasimha Dev and Goddess Lakshmi. Best gift for your near and dear ones. 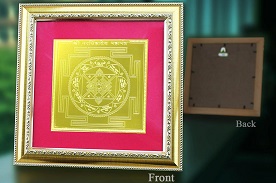 For protection from enemies and negative planetary influences. It balances, neutralizes, and strengthens natural elements. 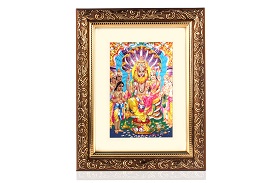 A beautiful frame of Lord Narasimha and Goddess Lakshmi that can be gifted, hung on the wall or placed at the altar for worship. 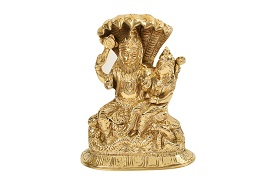 A beautiful brass idol of Lord Narasimha and His divine consort Lakshmi. Can be gifted or placed at the altar for worship. 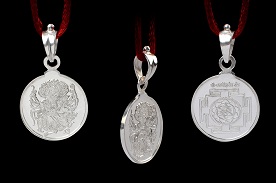 A locket with Shree Narasimhadev Yantra on one side and Lord Narasimha on the other. For overall protection from negativity in life.
Buy Now 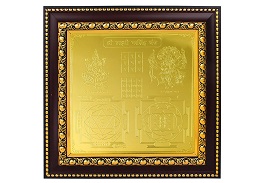 Made in pure copper with fine 24K gold finish, this Yantra is best for those seeking to win over their enemies with protection from adverse planets.
Buy Now 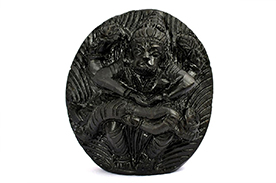 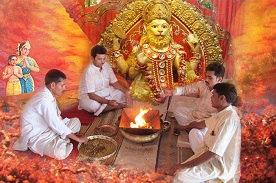 For protection against accidents, diseases and ailments. For success, wealth, victory, prosperity, abundance and peace of mind.
Book Now 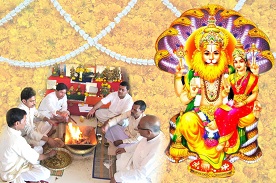 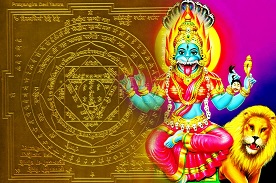 For those seeking protection against black magic, witch-craft and evil spirits and relief from debts, diseases, misfortunes and bad karma.
Book Now 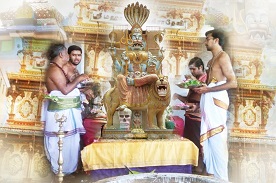 For those seeking removal of obstacles and prosperity and blessings of Pratyangira Devi.