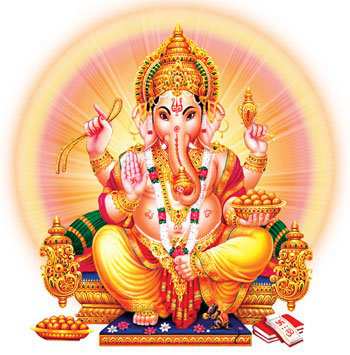 All about the Most Popular Zoomorphic Hindu Deity
GaneshaÂ is the elephant-deity who rides a mouse and has turn into one of the commonest mnemonics for anything related to Hinduism. It not only shows the significance of Ganesha, but also illustrates how popular and universal this deity is in the hearts of the people.

The Lord of Success
Ganesha is the son of Lord Shiva and Parvati, and has an elephantine countenance, a curved trunk with big ears, and a pot-bellied body of a human being. He is considered the Lord of success and demolisher of evils and impediments. He is also revered as the god of learning, knowledge, wisdom and wealth. In fact, Ganesha is one of the five major Hindu gods (the others being Brahma, Vishnu, Shiva and Durga) whose idolatry is worshipped as the panchayatana puja.

Ganesh Chaturthi
The ardent devotees of Lord Ganesha are the 'Ganapatyas', and the festival to celebrate and worship him is known as Ganesh Chaturthi.

Significance of the Ganesha Form

Ganesha's head represents the Atman (soul), and is the supreme reality of human beingâ€™s existence, and his human body represents Maya or the earthly presence of humans. The elephant head symbolizes wisdom and its trunk signifies the sound symbol of cosmic reality, which is Om. In his upper right hand Ganesha holds a rod, which drives mankind forward on the timeless path and gets rid of complications from the way. The noose in His left hand is a device to capture all obstacles.

The broken tusk that He holds as a pen in his lower right hand is a sign of sacrifice, and was broken to write the Mahabharata. The rosary in his hand implies that knowledge should be continuous. The laddoo in his trunk specifies that one must discover the harmony of the Atman. The fan-like ears mean He is all ears to our problems. The snake round his waist characterizes energy in all forms. And he is modest to ride the lowest of animal, a mouse.

How Ganesha Got His Head
The legend behind the birth of this zoomorphic deity, depicted in the Shiva Purana, goes like this: Once goddess Parvati, before bathing, created a boy out of the dirt of her body and tasked him with guarding the entrance to her bathroom. When her husband Shiva returned, he was shocked to find a stranger rejecting him access, and severed off the boy's head in anger. Parvati broke down in grief and to pacify her, Shiva sent out his group (gana) to bring the head of any sleeping creature facing the north. They found a sleeping elephant and brought its severed head, which was attached to the boy's body. Shiva restored its life and made him the leader (pati) of his ganas; hence his name 'Ganapati'. Shiva also granted a boon that people would worship him and pray to Him before starting any project.

There's another less popular story of his origin, found in the Brahma Vaivarta Purana: Shiva asked Parvati to follow the punyaka vrata for a year to placate Vishnu in order for them to have a son. When a son was born to her, all the gods and goddesses gathered to celebrate its birth. Lord Shani, the son of Surya, was also there but refused to look at the newborn. When Parvati asked him the reason, Shani replied that it would harm the newborn. However, on Her insistence Shani eyed the baby, and the child's head was severed instantly. All the gods started to mourn, at which point Vishnu hurried to the bank of river Pushpabhadra and brought back the head of a young elephant, and merged it to the baby's form, thus reviving it.

Ganesha: The Destroyer of Pride
Ganesha is also the slayer of arrogance, egoism and pride. He represents the material universe in all its various wonderful manifestations. "All Hindus revere Ganesha irrespective of their religious faith," says D N Singh in A Study of Hinduism. "He is both the beginning of the religion and the meeting ground for all Hindus."
Related Testimonials
Rudra Centre Videos