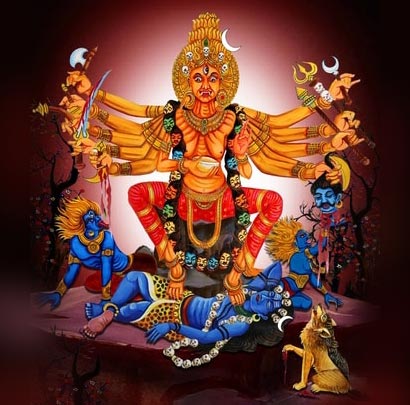 In Hindu Dharma, both the Gods and Goddesses stand for the supreme power of the universe. All the chief deities have both masculine and feminine partners. Hindu Goddesses denote Shakti – known to be the feminine source of power in the universe. They are extremely respected and strong as well as play a vital role in the formation, defense and annihilation of the universe.

Complementary to their male foils, Goddesses in the Hindu religion are the celestial representation of the cosmos. Female deities are purposeful goddesses with every Devi symbolizing a part of Shakti and the cosmos. Various deities are revered by different worshippers per their ideology and philosophy. One such powerful Goddess is Chamunda, the ferocious form of Chandi, the Hindu Divine Mother Parvati, and is one of the seven Matrikas (mother goddesses). She is also known by other names such as Chamundi, Chamundeshwari or Charchika.

Who is Goddess Chamunda?

Goddess Chamunda is known to be one of the most famous manifestations of Durga Devi in Hindu Dharma. The origin of Chamunda Devi finds mentions in Devi Mahatmya and Markandeya Purana. The story goes that when Goddess Durga was involved in a war with demons Munda and Chanda, Kali Devi materialized from the forehead of Durga and killed the asuras. Delighted with Kali, Durga named her Chamunda.

She is believed to be one of the main Yoginis, a group of sixty-four or eighty-one Tantric Devis, who are part of Parvati Devi’s entourage. The name is an amalgamation of Chanda and Munda, two demons who Chamunda had slain. Her identity is associated with Goddess Parvati, Kali or Durga.

Goddess Chamunda is typically depicted living in cremation grounds or around holy fig trees. The Devi is revered with wine offerings and ritual animal sacrifices. The custom of animal sacrifice is now not very common thanks to the impact of Vaishnavites and Shaivites.

Chamunda Devi was initially viewed as a tribal goddess, venerated by the tribals belonging to the Vindhya mountains in central India. It was common at the time for tribes to offer animals as well as human sacrifices to the Goddess along with the custom of presenting liquor. The fiery nature of the Devi is owing to her connection with Rudra (Lord Shiva), recognized with fire god Agni sometimes.

Chamunda Devi is venerated all across India and Nepal and is believed to be the Goddess of War. Several people in the Hindu and Jain community pray to her as their Kuladevi (Family Deity).

The beginning of how Goddess Chamunda came to be is stated in Markandeya Purana and Devi Mahatmya. As per the Agni Purana, there are eight varied manifestations of Chamunda Devi.

The Devi Purana explains a pentad of Matrikas who aided Lord Ganesha in slaying the asuras. Moreover, Sage Mandavya has talked about praying to the Māṭrpaňcaka (the five mothers), Chamunda being one of them. Apart from the literal translation of Chamunda as the killer of asuras – Chanda and Munda, the Devi Purana offers a slightly different take of Chanda being interpreted as terrible while Munda represents Brahma’s head or lord or husband. 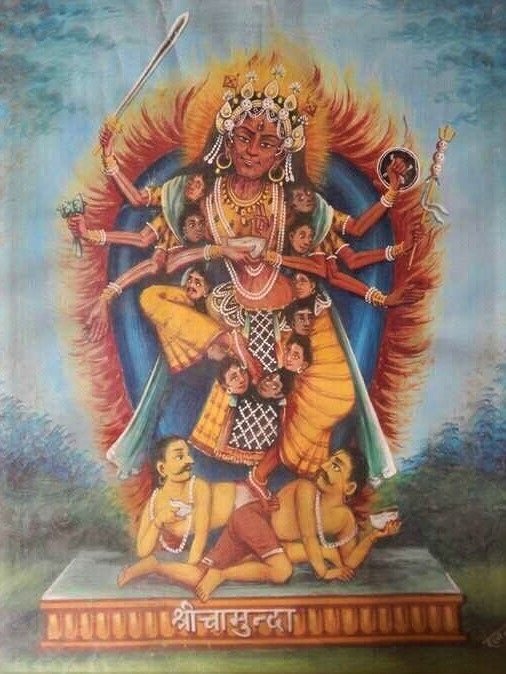 Goddess Chamunda is depicted with a scrawny body and shriveled belly with protruding ribs and veins. The Devi is decorated with a skull garland, bare teeth, sunken eyes and protruding tongue. The hairs of the Goddess are symbolized as standing on end with snakes peeping out. The deity is clad in tiger’s skin and her residence is typically a fig tree. The shrunken stomach is shown to have a scorpion painted. It can be mentioned that the figure depicts the deity in a fascinating way and showcases the fiery aspect of the Devi.

In a few iconographies, the Goddess is depicted with a child who is either positioned on the lap of the Devi or the kid is portrayed standing by her side. Goddess Chamunda may be shown standing, squatting or dancing with one leg pendant. The iconography of Rudra Chamunda is created out of black basalt.

Three of the four right hands hold a knife, a kettledrum, and one end of the elephant skin. The raised fourth hand which is positioned above the waist is shown broken. Among the four left hands, the small finger of the first is elevated to the lips as if the Devi is nipping off her nail and clutching the mace to her shoulder. The other hands are showcased as holding the elephant skin, a dead body and a kapala.

A couple of depictions have the Goddess carved out of sandstone. Some portrayals have Devi seated in a lalitasana pose where she has her right leg positioned on an indistinct object. A dancing gana is placed on either side of the Goddess. She is demonstrated as carrying the elephant skin which functions as her canopy. Thereby, it can be stated that the iconography of Chamunda is such that it denotes a fearsome and terrifying image of the Devi.

Chamunda Devi has been cited numerous times in the Hindu scriptures, notably the Puranas. One such story talks about how Goddess Chamunda is one among the seven manifestations of Shakti that came to assist Lord Shiva while he was waging a war on Andaka.

There is another tale that discusses how Goddess Chamunda seemingly drank the blood oozing out of the body of the asura Raktabija. The demon was bestowed with a boon that if a drop of his blood from the body touched the ground, then thousands of demons with equal strength will be generated. The Devi is referred to as Rakta Chamunda in this form.

There is another legend that details the origins of Goddess Chamunda. Commonly referred to as Durga, Chamundeshwari Devi is renowned to be the personal Goddess of the Mysuru Royal Family. Mysuru (Mysore) has assumed its name from Mahishasura, a demon with the body of a human but has the head of a buffalo. He is a violent and strong monster who interfered with cosmic powers and instigated a ruckus in the universe.

The celestial beings pleaded to Lord Shiva to mediate. Lord Shiva had granted a boon to the demon that he will not be slain at the hands of a man. The universe was not able to handle Mahishasura’s powerful army of demons. The devas thus contacted Goddess Parvati, Lord Shiva’s consort, to help. She took the form of Durga or Chamundi. She was fierce enough to kill Mahishasura and rid the world of his evil forces.

Chamunda Devi is known to epitomize the death, disaster, distress and annihilation of Mother Nature. But Goddess Chamunda is believed to be a kind soul who is compassionate to her devotees and is thus venerated in numerous regions of India. This Mother Goddess is known to be a fierce protector who shields her worshippers from harm. The form and the way Chamunda Devi is portrayed fluctuate from region to region. Even scriptures vary in the way her attributes are listed.

Goddess Chamunda’s vahana is believed to be the owl. She is portrayed as seated on an owl. Chamunda Devi showcases an eagle on her banners. Some of her companions are shown to be flesh-eating jackals or fearsome creatures like serpents and scorpions. 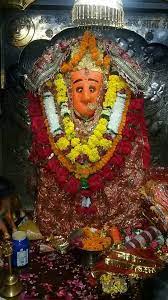 The story goes that initially Goddess Chamunda was venerated by the Munda people residing in the Vindhya range of Central India. It is said that certain devotees make animal as well as human sacrifices. They even present liquor to Chamunda Devi. The Goddess is assumed to have a fiery nature thanks to her connection to Vedic Rudra. She is even recognized as fire God Agni occasionally.

The story behind the Chamunda Devi temple is approximately 400 years old. A ruler and a Brahmin priest meditated on the Goddess for her consent to shift the shrine to an accessible place. She materialized in front of the priest in a dream and instructed the priest to dig at a specific place and unearth an ancient idol that should be set up in the shrine and revered as her form.

The ruler made arrangements to retrieve the idol. Even though it was found, it was too heavy to be lifted. Once again, the Devi emerged in the priest’s dream. She stated that the sacred relic could not be lifted since the men believed it to be an ordinary stone. She commanded the priest to wake up early in the morning, take a bath, don fresh clothes and approach the holy site in a reverential manner. The priest did exactly as he was instructed and found that he could lift the idol effortlessly, something that many men could not. He informed the public that it was the divine power of the Goddess that brought the idol to the shrine.

There is an easy guide on how to conduct Goddess Chamunda Puja at home: 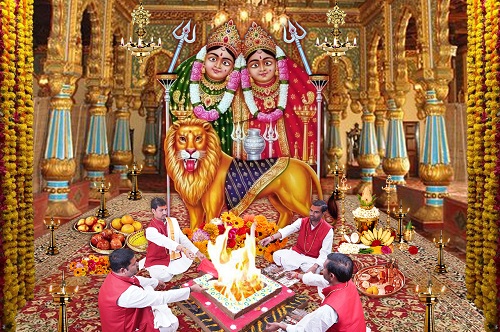 You can also book Maa Chamunda Puja and Yagna online with Rudra Centre where it will be performed by learned Karam Kandi priests from Shivakasi.

If an individual wishes to combat drug, alcohol, or other addictions, the person needs to mix sindoor in water and then drizzle it over the idol or image of Goddess Chamunda. Present uncooked masoor dal to Chamunda Devi and later place it on the south side of your home to prevail over financial issues. Offer uncooked wheat to Goddess Chamunda and subsequently burn it over a kapur (camphor) to avoid conflicts in your life.

Devotees worship Goddess Chamunda for relieving them of their sins, diseases, or past birth’s curses and also many doshas. She offers courage, knowledge, wisdom, bravery, knowledge, energy and mental satisfaction to her worshippers.

Chamunda Mantra or Chandi Mantra is predominantly recited by worshippers all over India. The Goddess guards her devotees against all negativities and brings forth positivity. The mantra improves the level of confidence and power. It enhances the intellectual capabilities, skills and talents to perform well in your career. It fosters the fortification of the mind and body of the individual chanting this mantra. You can perform well in your exams and enhance your level of concentration. It shields a person from the negative effects of planets.

Navratri and Dussehra are celebrated with great pomp and fanfare in temples dedicated to Goddess Chamunda. In Hindu Dharma, this major occasion is marked in honor of the divine feminine.