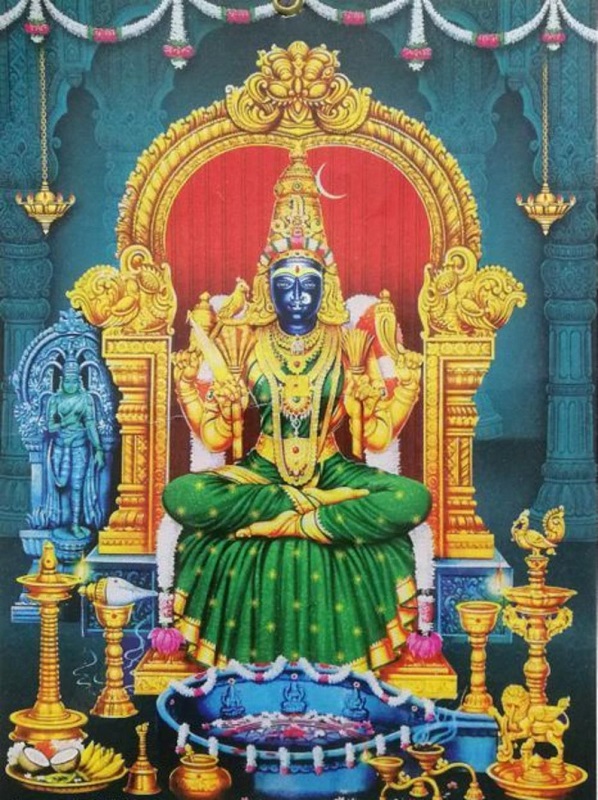 Goddesses are meant to be the personification of Shakti or the supreme feminine force of the cosmos. As a divine mother, Goddesses are known to protect the entire universe by annihilating the demonic energies and reinstating balance and peace in the whole universe. Every male God has a similarly strong female counterpart – the Devi or the Goddess who possess exceptional powers of conception, maintenance and destruction. She is the embodiment of elegance, affection, supremacy, knowledge, success and expertise.

Every Goddess has carved their own special stature in Indian mythology with intriguing tales for every single one of her powerful incarnations, divine beauty, and extraordinary powers. One such Devi whose story deserves to be told and heard more is Goddess Kamakshi.

Who is Goddess Kamakshi?

Symbolizing the sovereignty of nature, Kamakshi Devi is described as the Supreme Goddess of Tranquility and Beauty. Also Referred to as Kamakshi Amman, the Goddess is observed as a form of Maa Parvati or Goddess Shakti. She is viewed as a manifestation of Goddess Tripura Sundari Devi or the universal mother goddess. As Lord Shiva’s consort, she is revered as Kamakshi in Southern India and Kamakhaya in East India. Her name suggests ‘the desirable one’ or if you literally translate, it is ‘one whose eyes are full of desire’.

The story goes that Lord Shiva opened his third eye to obliterate Kama, the God of Love. But destiny had other plans because with a twist of fate what Shiva was intending to annihilate resisted and ended up becoming Bhanda, an asura. It is assumed that Goddess Kamakshi slayed this asura that emerged from the ashes of Kama.

The Kamakshi Amman Temple at Kanchipuram is believed to be the biggest and most noteworthy shrine devoted to Goddess Kamakshi. Kamakshi Devi is considered to be the reigning deity in the city of Kanchi. She is also revered at the Meenakshi temple located at Madurai and Visalakshi temple housed at Varanasi.

Goddess Kamakshi is Raja Rajeshwari, and an incarnation of universal power – Parasakti. This is why there is no distinct Ambal or Sakti sanctuary in Shiva temples within the perimeters of Kanchipuram. Sri Adi Shankara had set up and sanctified a Srichakra in front of the Goddess and the everyday reverence is performed for this chakra – referred to as the Kamakoti Peeta.

Significance of the Name

Goddess Kamakshi has been mentioned in Lalita Saharsranama, a Hindu text from the Brahmanda Purana. The Devi is described as ‘She whose eyes awaken desire; She who has beautiful eyes.’ According to the legend, Goddess Kamakshi is believed to have charmed Lord Shiva, the hermit God, thanks to her alluring eyes, thereby ensuring his involvement in worldly life. Goddess Kamakshi is worshipped for she is renowned for blessing her devotees with wisdom, success, fame and good progeny. 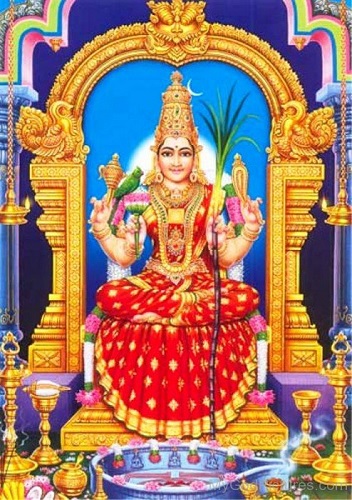 In temples located in South India, the relationship between Kama and Kamakshi is elevated. Her symbols are connected to the God of Love. She is portrayed as a gorgeous woman who is sitting on a lotus draped in a red sari and is decked with gold jewels, pearls and gems.

Along with four arms, she has a glowing face. She is known to hold divine chakras such as Pasa and Ankusa on the upper left as well as right hands. As for the bottom left and right hands, you can see a bow of sugarcane and floral arrows.

Other depictions showcase the Goddess with a noose, goad and a parrot in her top left and right arms. She is holding a lotus as well as a bow of sugarcane in her bottom left and right hands. In the Kanchi temple, Goddess Kamakshi is seated in a meditative yogic posture – the Padmasana and is portrayed bestowing peace, grace and abundance on those who visit to worship her. Some depictions showcase that the Goddess also has a Chandraperai (a moon-like structure) perched on her forehead.

One of the stories talks about how Goddess Kamakshi came to be. According to a legend, Uma (Goddess Parvati) once shut the eyes of Lord Shiva with her palms, in a playful way. This led to universal darkness for some time. All the sages, gods, and humans were scared and worried. Lord Shiva was very upset and he ordered Shakti to be born on earth and stay there until she has done her penance for her actions. Accordingly, Shakti was born as Kamakshi in Mangadu and was meditating under a mango tree with a Shiva Lingam made of sand in order to wed Lord Shiva. At that moment, Shiva took the form of the Kamba River with high tides to assess Kamakshi. She clutched the idol closely so that it did not get swept away by the tides.

As Lord Shiva did not materialize in front of her as promised, she made the choice to perform a penance. She ignited a fire on all sides, in five homa kundams and positioned herself in the kundam at the center. She then stood on her left toe on the leaping tongue of flame and moved into divine trance for ages. In this pose, the Goddess is referred to as Tapas Kamakshiamman. Then, Lord Shiva asked her to take a trip to Kanchipuram where he would marry her. She headed out to Kanchi where Shiva emerged in front of her and they got married.

While leaving, as per the legend, she did not put off the fire that she had ignited. People living on Mangadu and its nearby places could not tolerate the scorching heat. When Adi Shankara visited Mangadu, the locals beseech him to assist them in putting off the heat radiating from the homa kundams. He set up the Ardha-Meru Sri Chakra and quashed the heat.

There is another interesting tale about the origin of Goddess Kamakshi. As per Legends, Kamakshi Devi emerged when Lord Shiva burnt Manmatha or Kama – God of Love – to ashes by his third eye. Kama earned Shiva’s wrath as he had interrupted the latter’s yogic meditation. It occurred at the exact moment when Lord Shiva was going to conclude his meditation. Flames and sparks rose from Lord Shiva as he reduced Kama to ashes. The ash is then fashioned into the form of a man. Shiva breathes life at the ash figure by simply looking at it. This results in the emergence of Bhanda. After performing severe austerities, he is granted a boon that no one born out of a sexual union would be able to slay him. Since he was created out of a dead deva, he came into this universe as a demon. Bhanda was the result of Lord Shiva’s anger.

Bhandakasur was creating a ruckus and causing trouble for the Devas. They headed out to Kanchipuram and manifested as parrots. They were residing in the Champaka tree and were invoking Goddess Tripurasundari Devi. The Goddess took a ferocious form and slayed the demons, thus saving the devas. But even after assassinating the demon, the Devi failed to calm down. All the Devas were very scared and started praying to her. Then, she took on the avatar of Goddess Kamakshi Devi, a beautiful young girl adorned with gold jewelry. All the devas worshipped her and asked her to bless them. They requested the Devi to remain in this form in Kanchipuram, to which the Goddess agreed.

Kamakshi Devi is associated with beauty, attraction and charisma which resonate with the energies of 13 Mukhi Rudraksha. We present genuine, natural 13 Mukhi Rudraksha which blesses the wearer with divine charisma, magnetic personality and the power of desire fulfillment. It also helps to awaken the Kundalini energy. 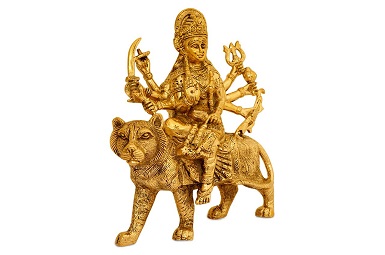 Explore our range of Durga, Kamakshi and related forms of the Divine Devi in Heavy Brass. Makes for a divine addition to your décor, improving the aura with energies of harmony, fortune, bliss and optimism. 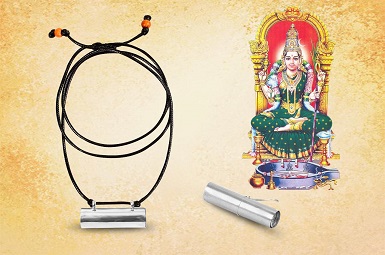 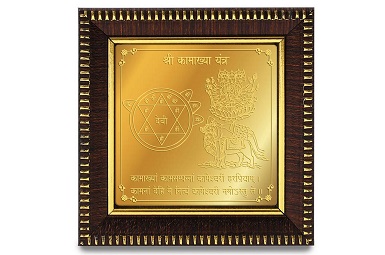 Kamakshi Devi is referred as Kamakhya Devi is East India; Rudra Centre develops and energizes Kamakhya Devi yantras on brass sheets with fine etching and accurate geometry as per the Shastras plated with 24 carat gold

Yoni Puja refers to womb worship and this is the foundation of praying to Goddess Kamakshi. She is venerated in the form of a womb, a cleft in the rock, from where red fluid pours out following the first rain in June annually. Kamakshi is all about arousing passion for the world at large. As a Goddess, she is on par with Lord Shiva in stature.

Worshiping women is typically connected to procreative abilities in almost all cultures. Human life is produced by women. The color red is also linked with worshipping females. It epitomizes red seed or menstrual blood that gushes out of a healthy body of a fertile woman who is not pregnant.

Metaphorically speaking, the womb stands for nature, material world, Prakriti, fluids and fragrances that can assume different forms. It is a universe filled with desires, passions, attachments, and ambitions. Shiva, the hermit, is known to avoid both – the literal and the metaphorical features of the Goddess. Therefore, Kamakshi is also portrayed as stepping on Shiva, emblematically waking him up from his inward-looking meditative state.

To achieve benefits, you have to worship for six weeks at a stretch. What should you offer the Goddess? Turmeric, vermillion, coconut, flowers, camphor, two lemons, areca nut and betel leaf.

If you present two lemons to the Goddess, the priest will give you one back which you can keep in the temple at your house. The subsequent week when you head out to the shrine, take this lemon along with two new lemons. One of the lemons will once again be given back to you. In the third week, take this lemon plus three new lemons. On the 6th week, when you present the lemons to the priest, you won’t get them back. Also, offer milk to the Devi that has been coated with honey/sugar/cardamom. Once the milk is presented to the Goddess, you may distribute it amongst other worshippers in the temple – particularly young kids.

Goddess Kamakshi is believed to enjoy milk. Therefore, milk is given to the deity. If you begin worshipping the Devi in this manner, your wishes and hopes will surely be fulfilled. Devotees who are unable to visit the temple can do the 6-week worship of Goddess Kamakshi in their own house. If you can place a lemon before Goddess Kamakshi’s idol or image at home and perform the puja, it is assumed to be highly auspicious. 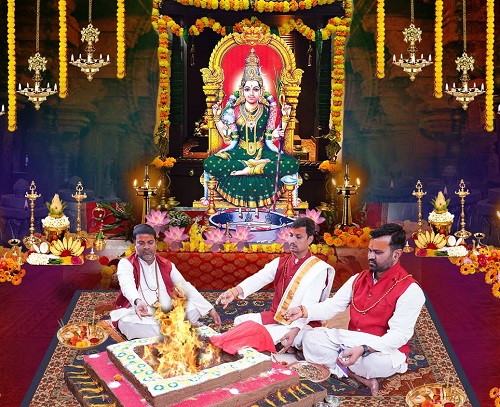 You can also book Kamakshi Devi Puja online with Rudra Centre where it will be performed by learned Karam Kandi priests from Shivakasi.

Goddess Kamakshi is the symbol of goodness and helps everyone who prays to her with a pure and clean heart. She is venerated for being the Goddess of fertility and blesses childless couples with progeny. She is also popular for bestowing her devotees with fame and virtue. You will also be able to get rid of any impure or negative thoughts. You will be able to attain mental peace and combat depression. The Goddess will bless you with better health and physical well-being. You will be able to get the job you desire as well as achieve success and prosperity.

Some of the festivals celebrated in the Kamakshi Amman Temple at Kanchipuram are Navratri, Aippasi Pooram, Vasanta Utsavam, Aadi and Sankara Jayanthi. They are celebrated at the sacred site with grand pomp and fervor.