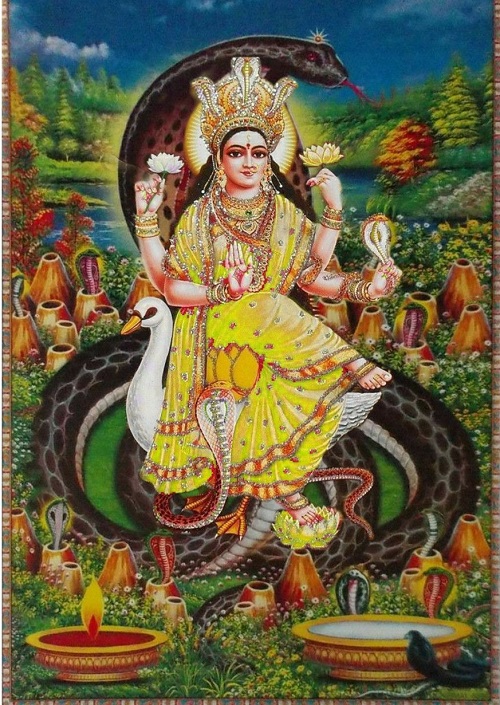 Indian mythology discusses numerous deities, allocating everyone a specific level of divinity and responsibilities. Hinduism talks about Gods and Goddesses, demi-Gods and demi-Goddesses, semi-divine races and mythical creatures. It is believed that there are approximately three hundred and thirty crore celestial beings in Indian mythology. Some of them are extremely renowned such as Lord Shiva, Lord Brahma, Lord Vishnu, Goddess Saraswati, Goddess Lakshmi, Goddess Parvati and so forth. But there are numerous ‘lesser’ known deities whose stories deserve to be told and heard. One of them is the incredible Goddess Manasa.

Who Is Manasa Devi

Worshipped majorly in Bengal, Uttarakhand, Jharkhand and other North-Eastern states of India, Manasa Devi is renowned as the snake Goddess. It is assumed that Goddess Manasa is the one who has authority over all the snakes on Earth. It is widely believed that you can be cured of a snake bite if you worship her. Devotees also pray to Goddess Manasa for fertility as well as prosperity.

Goddess Manasa is the sister of Vasuki (King of Nagas) and the spouse of Sage Jaratkaru. She is also believed to be Sage Astika’s mother. She is also called Vishahara (Destroyer of Poison), Padmavati and Nitya (eternal). She is known to represent both ‘destruction’ as well as ‘regeneration’, nearly similar to a snake casting off its own skin and being reborn. Considered to be the protector of children, Manasa Devi is commonly recognized with Goddess Shasti.

There are contradictory claims to Goddess Manasa’s parentage. While some believe that her father is Sage Kashyapa, others consider Lord Shiva to be her father. Due to her mixed parentage, Manasa Devi was denied full godhead. This is why her ultimate aim was to completely establish her power as a Goddess and to obtain loyal human worshippers. 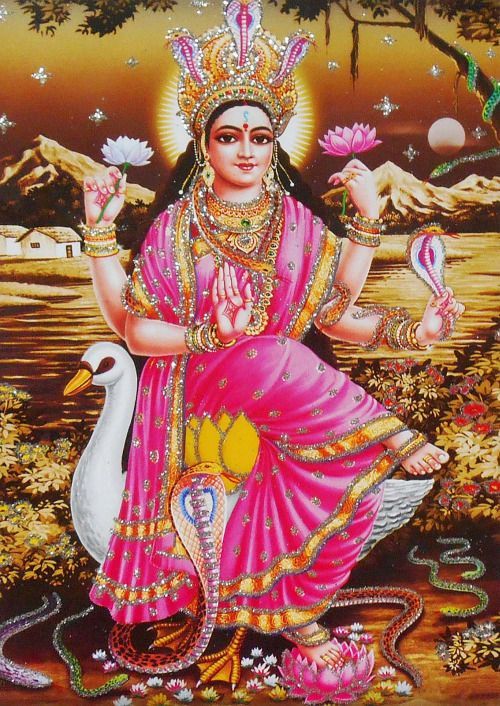 Manasa Devi was initially viewed as an Adivasi (tribal) Goddess. Manasa was approved into the Hindu pantheon by the lower caste. Afterward, Goddess Manasa was acknowledged by the higher caste. She is now considered a Hindu Goddess as opposed to a tribal one. It is implied that Manasa emerged in South India as a non-Vedic and non-Aryan Goddess and is associated with the Kannada folk snake-goddess.

She is mentioned in several Hindu scriptures and texts. As per Brahma Vaivarta Purana, Goddess Manasa is believed to be the mind-born daughter of Sage Kashyapa. This is why she is named ‘Manasa’ as it means – conceived in the mind – Manas. It implies being born in the mind. The name also suggests ‘wish’. She is known as the goddess who realizes all the wishes of genuine worshippers. Due to her fair complexion and immense charm, Manasa Devi is a unique deity who is immensely famed in the Subterranean world, particularly snakes and other species of the underworld and also on earth, heavens and Brahmaloka.

Goddess Manasa Devi is cited in the Mangal-Kavya. As per the Manasamangal Kavya (the most ancient of the Mangal Kavya), it is learned how the snake Goddess Manasa formed her worshipping base in Bengal by turning a Shiva devotee into her worshipper. She was a non-Aryan deity who is assumed to have shown up in Bengal with the Dravidians who prayed to her in the hope that she would shield them against snakes. In the Hindu epic Mahabharata, Goddess Manasa was originally acknowledged as the daughter of Sage Kashyapa and Kadru, the mother of all Nagas.

By the 14th century, Manasa Devi was recognized as the Goddess of Fertility and marriage rites and was integrated into the Shaiva pantheon, associated with Lord Shiva. Numerous myths sang her praises by describing her as the one who saved Shiva’s life after he gulped down the poison and revered her as the ‘Remover of Poison’. Her fame rose and spread to South India. There were numerous tales that credit Manasa’s birth to Shiva and eventually Shaivism incorporated this Goddess into the Brahmanical tradition of mainstream Hinduism.

The iconographical analysis of the Goddess Manasa’s image indicates that her idol is created out of black basalt. The seven-hooded and two-armed goddess is depicted sitting in a lalitasana pose on a double-petalled lotus positioned over a jar from which two snakes are observed coming out.

Manasa Devi is portrayed as being decked with various ornaments, among which the Sarpa-Kuchabandha is extremely popular. It is a breast band fashioned out of snakes. At the same time, the Goddess is depicted holding an eight-hooded snake in her left hand. Her right hand is showcased in the varada position, holding a fruit. She is accompanied on either side by a sitting emaciated figure and a crowned male recognized as Jaratkaru and Astika, her husband and son respectively, as per the Puranas.

In other places, the idol of Goddess Manasa is portrayed as an elegant woman with her body decked with snakes and is shown sitting on a lotus or standing on a snake. She is typically observed under a hooded canopy of seven cobras with a goose adjacent to her. She is generally viewed as the ‘one-eyed goddess’ and occasionally showcased with her son Astika on her lap. Her one eye is owing to the belief that her stepmother Chandi burnt one of her eyes in a fit of jealous rage. 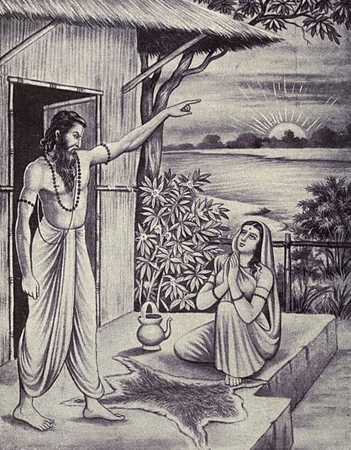 The Puranas are considered to be the first scriptures to mention Goddess Manasa’s birth. They state that Sage Kashyapa is her father. When serpents and reptiles had caused a ruckus on earth, Kashyapa produced Manasa from his mind (mana). Lord Brahma (Creator) made her the reigning deity of snakes and reptiles.

Sage Jaratkaru married Manasa on the condition that he would abandon her if she disobeyed him in any way. One day, Jaratkaru was upset that Manasa woke him up very late in the morning. It was too late for his morning prayers. He was so enraged that he deserted her. After the Hindu Gods requested him to reconsider, Sage Jaratkaru returned to Goddess Manasa and she gave birth to their son – Astika.

The Mahabharata talks about Manasa’s marriage. Sage Jaratkaru performed rigid austerities and had decided to stay away from matrimony. One day, he stumbled upon a group of men who were hanging from a tree upside down. These men were believed to be his ancestors. They were destined to sorrow and suffering as their children had not conducted their last rites. So, they recommended Jaratkaru tie the knot and have a son who could liberate them from those misfortunes by performing the rituals. Vasuki (King of Nagas) offered his sister Manasa’s hand to Sage Jaratkaru. Goddess Manasa gave birth to their son, Astika, who freed his ancestors. Astika also aided in saving the Naga race from being annihilated when King Janamejaya decided to eradicate them by sacrificing them in his Yagna as a fire offering.

In this tale, Goddess Manasa was believed to be the daughter of Lord Shiva. Her stepmother Parvati did not like her, so she decided to live on earth with another daughter of Shiva, called Neta. Owing to no confirmation in her parentage, Manasa Devi never really had the stature of a premium deity. Manasa desired to be worshipped as a Goddess and knew she could achieve her dream if she could get the devotion of a rich and powerful merchant prince of Champak Nagar – Chand Saudagar – in Bengal. He was a widower who had six sons and was extremely caring and loving towards them. Manasa tried her best to persuade him but since he was a staunch devotee of Lord Shiva, he was not going to switch his loyalties towards the Goddess of Snakes.

Once, Manasa appeared before Chand by disguising herself as a beautiful maiden. He was so captivated by her beauty that he asked her to marry him. But the lady insisted that he confer the magic powers (given to him by Lord Shiva) to her before the wedding. Later, Manasa materialized with her original self and once again asked Chand to worship her but he rejected her request.

The six sons died due to snake bites on the instructions of Manasa. Subsequently, Chand re-married and had a son named Lakhinder. As he grew up, Chand chose a beautiful maiden named Behula as a suitable bride for Lakhinder. Manasa slayed Lakhinder but thanks to the intense love and devotion of Behula, he was brought back to life. Eventually, Behula was able to convince her father-in-law to venerate Goddess Manasa. Chand agreed to pray to Manasa by using his left hand to conduct the rituals. Manasa accepted the condition and Chand worshipped her with utmost sincerity. 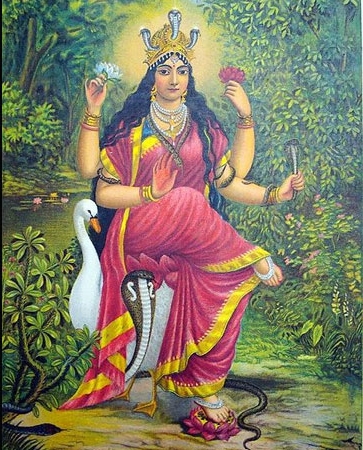 Jhapan Mela This festival is marked in honor of Manasa Devi, sister of Vasuki (King of Nagas), and believed to be the mind-born daughter of Sage Kashyapa. Goddess Manasa is considered to be a kind deity who bestows blessings for abundant rainfall and harvest. The tribal community residing in West Bengal celebrate Jhapan Mela, a type of snake festival.

Nag Panchami On this auspicious day, devotees venerate living snakes or images of the serpent in temples by offering milk. It is assumed that revering snakes on this holy day helps get pardoned from sins. This deep-rooted cultural tradition to pray to Nagas or snakes falls on the fifth day of the lunar fortnight in the month of Shravana. 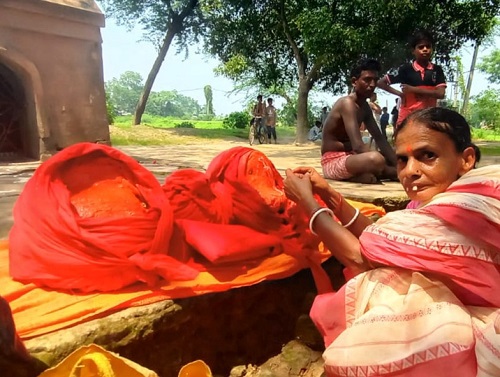 To worship Goddess Mansa, you can perform Manasa Devi Ashtang Puja at home. The ceremonies related to the pujas happen on the fifth day or Panchami day of all fortnights in the month of Ashara and Shraban. In specific places in India, the puja and rituals carry on for a month and numerous ceremonies are conducted to make Goddess Manasa happy.

There are other ways to worship Manasa Devi as well. She is typically venerated without an image. You can use a branch of a tree or an earthen snake image or an earthen pot as a way to venerate the deity. But in some cases, images of Goddess Manasa are also used. Manasa Devi is commonly worshipped during the rainy season when snakes are the most active.