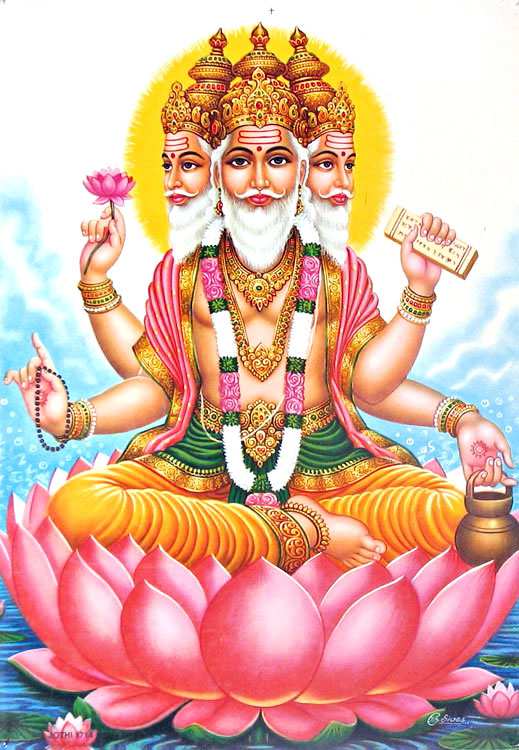 Lord Brahma is one of the supreme Trinity of Gods apart from Lord Vishnu and Lord Shiva. He is known as the creator of the universe. He created the Earth and everything that flourishes on it. His divine consort Goddess Saraswati provides Him with knowledge to run the universe which is necessary for the process of creation.

Lord Brahma is known as the father of Manu from whom all beings came into existence. Lord Brahma is often perceived as Prajapati, a Vedic divine being. He is also considered as the Lord of Speech and Sound. Although He is not worshipped as customarily and widely as other Gods, He is a prominent divine figure in Hinduism and mythology. Lord Brahma is depicted as the ruler of Brahmaloka, the greatest heaven where only the supreme reside. In the temples built for worship of Lord Shiva and Lord Vishnu, the walls in the north have a place where He is worshipped. Goddess Saraswati is His consort hence worshipping them may bless one with knowledge, wisdom and intellect.

Lord Brahma's vahana is the Swan, which is a symbol of grace. The Swan is blessed with Neera-Ksheera Viveka, a virtue that enlightens us to detach the good from the evil and then recognize that which is valuable and abandon everything that is evil or futile.

Lord Bramha is said to be the son of God. It is said that first Brahmand, the universe created the water where the seed of life was placed. The seed eventually grew and transformed into a golden egg out of which "Hiranyagarbha" i.e., Lord Bramha took birth. There is another tale which depicts the origin of Lord Brahma as a self-born God from a lotus flower which grew out of Lord Vishnu's navel and was born to create the whole universe and devise the grand plan of its existence.

Lord Bramha later created Manas Putras in the form of Prajapatis to become the father of the human race. Even Dharma and Adharma, Krodha, Lobha are said to exist through Lord Bramha.

Appearance of Lord Brahma and its symbolism:

Lord Brahma is always clad in red clothes and is depicted having four heads, four faces and four arms. As He is the Creator of all beings, He does not carry weapons in any of his hands. He is often cited as having white beard that symbolizes the nature of His existence. The upper right hand has a rosary and the upper left carries a book, the lower left has a kamandalu or water-pot and the lower right hand bestows blessings towards everyone who seeks refuge. Each hand has its own representation where the beads are the substance through which creation took place, the book signifies knowledge and the water pot symbolizes nature and living essence of life. The four faces which continuously chant each veda â€“ Rig, Yajur, Sama and Atharva, represent all sacred knowledge that exists. The arms represent the four directions of the creation and hold Brahma to be the one Omnipresent Lord of the universe.

Lord Brahma is said to be less prominent when it comes to worship amongst other deities but has symbolic temples that are hugely worshipped by His followers. In Hindu religion, Lord Brahma is considered to be the most important deity as through Him the entire human race is came into being.

There are certain mantras which can be used to praise and worship Lord Brahma.

Meaning : Lord Brahma, the creator is the teacher and is supreme amongst all other Gods. He is verily Lord Vishnu and Lord Shiva himself. I offer my salutations to such a guru.

Meaning : I offer my prayers to Lord Bramha who is one with the universe

Meaning: I offer my prayers to Lord Bramha, the Creator of Vedas and who holds the world within himself. Bless me with intelligence and knowledge.

Meaning:
" Guru is verily the representative of Brahma, Vishnu andShiva. He creates, sustains knowledge and destroys the weeds of ignorance. I salute such a Guru "