Explore about Chitragupta Maharaj: An Accountant of God Yamraj

Explore about Chitragupta Maharaj: An Accountant of God Yamraj

Hinduism interprets the whole creation and its cosmic activity as the work of three primary basic forces epitomized by three gods, which comprises the Hindu Trinity: Brahma – the creator, Vishnu – the preserver and Shiva – the destroyer.

Who is Lord Chitragupta? 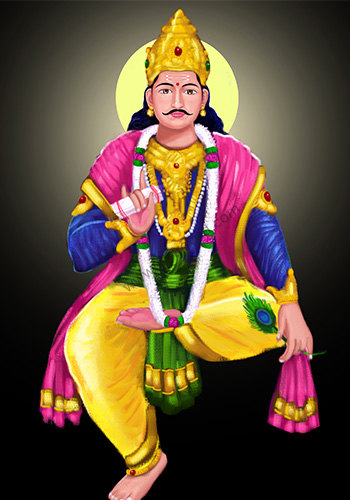 Chitragupta is a Hindu God who has been delegated with the mission of maintaining complete records of the actions of human beings and either punishing or rewarding them based on their karma. After they die, Chitragupta is entrusted with the job of determining if a human being goes to heaven or hell, contingent on their actions on the earth. Lord Chitragupta is believed to be the seventeenth Manasputra of Lord Brahma.

He is said to have been formed out of Brahma’s soul and mind and thereby, assigned to pen down Vedas like Brahmins with the duty of a Kshatriya. Chitragupta is assumed to escort Yama, the God of Death. Chitragupta Maharaj is considered to be the patron deity of Kayasthas, a Hindu caste of India and Nepal.

Since Lord Chitragupta was given the task of keeping a log of deeds committed by human beings on Earth, he is referred to as the ‘Bookkeeper’ by both human beings as well as Gods. He is also known as the God of Justice. Since Hindu mythology fiercely backs the role ‘Karma’ plays in determining which journey an individual ascends after his/her life on earth, all deeds committed by the person are meticulously evaluated and only then can an appropriate path be made. The role of Chitragupta is to make a log of all beings and determine their fate after they let go of their mortal coil.

As per the Vedic scriptures, the souls of men post-death are given either rewards or punishments based on their sins and virtues. Thereby, it is said that the good and bad deeds of men are not annihilated. The souls of men after they die travel to Yamloka, which is supervised over by the gods known as Yamadutas who keep logs of actions of beings and based on that, deliver them their dues. The main deity of Yamaloka is believed to be Yamaraj – the king of Yamaloka, and the Chief of Laws.

As per the Padma Purana, Chitragupta was positioned next to Yama to chronicle the good and evil actions of all sentient beings. He came with supernatural wisdom and became the accomplice of sacrifices delivered to the gods and fire. It is for this purpose that the twice-born always provided him with offerings from their food. As he emerged from the body of Lord Brahma, he was referred to as Kayastha of several gotras on the face of the earth.

Garuda Purana talks about the imperial throne of Chitragupta in Yamaloka administering his court and doling out justice based on the actions of men and preserving their record. The Mahabharata discusses the teaching of Chitragupta needing men to do noble and charitable acts and performing Yagna, mentioning that men are either rewarded or punished based on their moral or immoral actions. 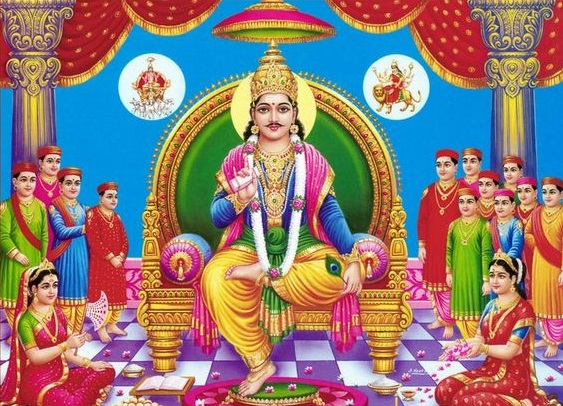 Lord Chitragupta is indebted to Lord Brahma for his heritage, who is his father. Lord Brahma is believed to be one of the three Gods in the holy trinity of Hinduism and venerated as the Creator. Yama, the God of Death and seventeenth formation of Brahma was initially assigned with the job of preserving the logs of the dead, but they were astounded by the sheer amount of the numbers. This resulted in numerous wrong decisions which led to chaos. He duly implored Lord Brahma to deliver him with a capable assistant to whom he could allocate this job.

Lord Brahma acknowledged the significance of the matter and delegated the job of preserving the affairs of the Universe temporarily to Surya, the Sun God, while he contemplated the same. After meditating for about 11,000 years, Lord Chitragupta eventually materialized from the mind and body of Brahma. He showed up with a pen and paper in his hand, demonstrating exceptional skills in the role of the heavenly bookkeeper.

Since he was born in secrecy, he was called Chitragupta (Hidden Picture). His sharp and vigilant eye noticed every single deed. The deity is also attributed to being the first to make use of letters. He was married twice, to Dakshina Nandini and Erawati Shobawai, with whom he had twelve kids in all. Lord Chitragupta had many sons who are called Mathur, Gorh, Bhatnagar, Saxena, Karn, Srivastava, Ambastha, Asthana and so forth.

Another story that talks about the origins of Lord Chitragupta mentions Goddess Parvati. One day, Parvati Devi asked Lord Brahma to create an individual who will maintain an account of the activities carried out by living beings. It is believed that Lord Brahma then drew an image of Chitragupta on a block of wood and then proceeded to give life to it. This tale is more famous and well-known in South India. In this story, Lord Chitragupta is portrayed with a nail and palm leaf. The nail is used for penning down on the palm leaf. 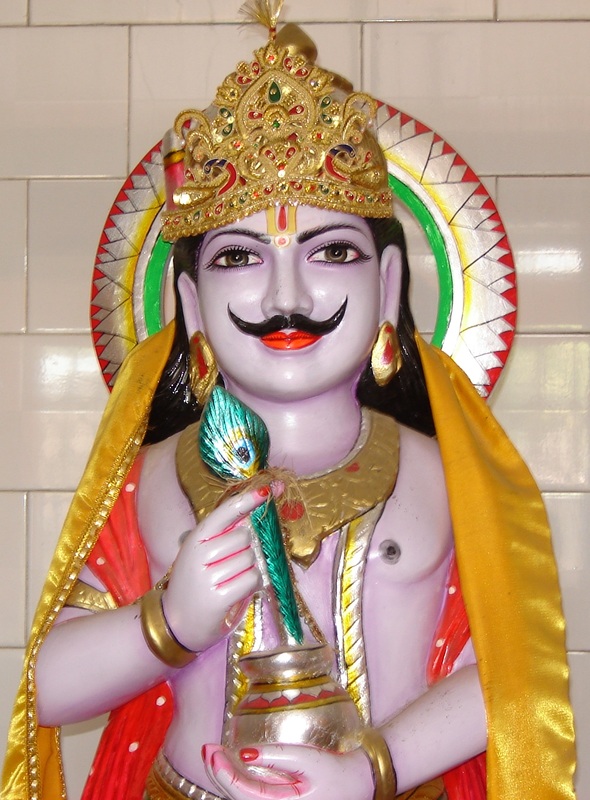 The Hindu Dharma ascribes to the concept of life cycle and rebirth. It is believed that those who have committed wrongdoings have to take rebirth after a punishment duration in hell to finish their life cycle.

The main duty of Lord Chitragupta is to keep the records of all human beings on Earth. He maintains a log of all the noble and misdeeds of an individual and proposes rewards or punishments accordingly. He has been entrusted with the task to determine if they will attain ‘Nirvana’ or go to heaven for their good deeds and receive reclamation from all worldly issues or be punished for their misdeeds in another life form or hell. This is the reason why he is referred to as the ‘Protector of Dharma’.

Lord Chitragupta is believed to be omnipresent and omniscient. He is considered to keep specific and thorough accurate logs of the deeds of all human beings from their birth till the day they die.

Chitragupta possesses sharp skills in the area of administration and maintaining records, which significantly improves his prestige among the Gods and even human beings who recognize him as a talented custodian of human karmic registers.

Numerous temples in India are devoted to Lord Chitragupta. Some of the prominent ones are in Kancheepuram in Tamil Nadu, Hyderabad in Andhra Pradesh and Udaipur in Rajasthan. More shrines featuring Lord Chitragupta are housed in Bihar, particularly in the districts of Hajipur, Raxaul, and Muzaffarpur.

During Diwali, people not only observe Bhai Dooj but also pray to Lord Chitragupta. After the Diwali celebrations, Chitragupta Puja is performed in honor of Lord Chitragupta. This ceremony is conducted in the majority of North India. According to Hindu mythology, it is thought that Chitragupta is accountable for maintaining a complete track record of all human beings’ deeds on earth and subsequently delivering justice after the individual’s death.

As per Hindu Dharma, Lord Chitragupta determines heaven or hell for human beings, based on their karma, and justice is given concurring with the person’s deeds on the earth after they died. It is said that Lord Chitragupta blesses an individual by eliminating illiteracy and poverty. During the puja, an elaborate account of the earnings and expenditures is penned down and devoted to the deity. People venerate account books, pens and ink on this auspicious day. Apart from the Kayastha community, the day is also considered significant for people who have business ventures.

How to best worship Lord Chitragupta

Lord Chitragupta with astute managerial skills and expertise is revered in numerous temples all over India. Several Pujas and Homas are performed in his honor, along with offerings of pens and books. Other contributions comprise honey, jaggery, plates created out of leaves, yogurt, vermillion, brass utensils, sandalwood paste, and betel nut.

Before performing the puja, the place ought to be swept and cleaned. Sweets need to be prepared. Ignite an earthen lamp and draw a swastika on the ground. Clean Chitragupta’s idol and apply vermillion on his forehead. Books and stationery items are placed in front of the idol and devotees recite mantras devoted to the Lord. Several devotees pen down mantras in a bid to copy his actions and also present flowers to honor the deity. After the Puja is done, sweets are distributed as Prasad. All the papers that were written to pay homage to the lord are soaked in a water body. 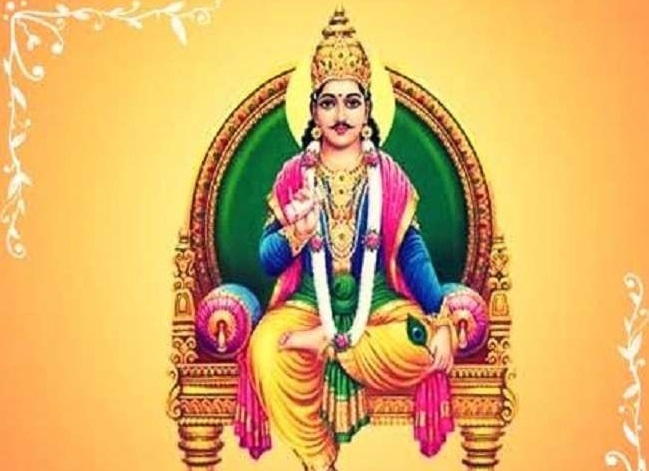 Lord Chitragupta is renowned for blessing his worshippers with wisdom, knowledge and an analytical mind which is vital to be living a fruitful life even today. All his teachings are considered to be highly useful, even today, particularly in the modern universe, which depends a lot on the administrative and managerial expertise of an individual.

The Chira Purnima is a Hindu festival devoted to Chitragupta, who is renowned to be the divine accountant and is viewed as an assistant to the God of Death, Lord Yama. He is accountable for maintaining the log of deeds and misdeeds of all individuals.

Chitra Purnima is also popularly known as ‘Chitirai Purnima’. It is fundamentally a Tamil festival that is observed on the Purnima (full moon day) during the month of ‘Chithirai’. In the English calendar, it typically falls during the month of April-May. This day is considered to be auspicious as the full moon and Chitra star are seen together.

Chitra Purnima is thus celebrated in honor of Chitragupta. His worshippers venerate him on this day to seek forgiveness for their sins. As per another Hindu tale, the day of Chitra Purnima is also devoted to Indra, the Lord of Gods.