About Lord Jagannath Swamy: A Supreme God of Puri 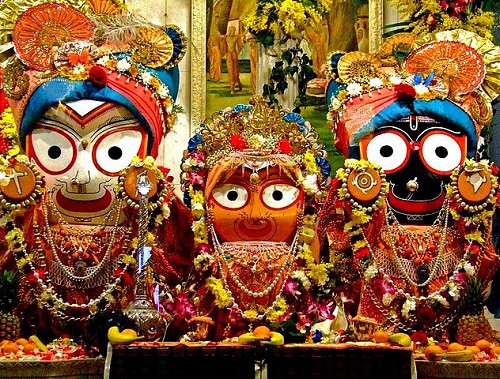 In Hinduism, there is a singular, universal god called the Brahman or the Supreme Being. The Hindu Dharma is renowned for its many gods and goddesses, recognized as deva and devi, who stand for one more of Brahman’s elements. At the forefront of the numerous Hindu Gods and Goddesses are the Holy Trinity – Brahma, Vishnu and Shiva – creator, preserver and destroyer. At times, the trio would manifest in a different form, personified by a deva or devi.

Every province in India is home to a specific deity. People of North India usually pray to Goddess Durga, a form of Parvati Devi. Those who are from Maharashtra showcase their devotion to Lord Vitthal (a manifestation of Lord Krishna) while people from Gujarat predominantly worship Srinathji, a form of Sri Krishna. Much like other regions, a significant portion of East India believes Lord Jagannath, a reigning God of Puri, as their supreme divinity. Even though there is a powerful impact of Goddess Durga as well, Puri Jagannath is revered as the Absolute God.

Who is Lord Jagannath?

Lord Jagannath is renowned as a transcendental Hindu God, largely venerated by the people belonging to Orissa as well as a huge portion of West Bengal. Sri Jagannath is believed to be one of the forms of Lord Krishna, the eighth avatar of Lord Vishnu. He is revered as a part of a triumvirate, along with his brother Balabhadra and sister Subhadra.

As Jagannath, the deity is referred to as the Lord of Universe – the three words comprising heaven, earth and the netherworld. Jagannath is considered to possess several of the attributes of Lord Vishnu who is renowned to be the preserver of the universe conceptualized by Lord Brahma.

Lord Jagannath is believed to be a non-sectarian deity. He is immensely worshipped regionally in the Indian states of Odisha, West Bengal, Chhattisgarh, Bihar, Jharkhand, Assam, Gujarat, Manipur and Tripura. He is also important to the Hindus hailing from Bangladesh. The Jagannath temple located in Puri, Odisha is specifically vital in Vaishnavism and is considered to be one of the Char Dham pilgrimage sites in India as well as one of the foremost pilgrimage places for Hindus since approximately 800 CE.

While it is subject to interpretation, the hymn 10.155 of the Rig Veda talks about a Daru (wooden leg) drifting in the ocean as apurusham. The term was assumed to be the same as Purushottama and the Dara wood log being an inspiration for Jagannath, thus inserting the origin of the deity in the 2nd millennium BCE. But many scholars reject this interpretation by maintaining that the appropriate context of the hymn is ‘Alaxmi Stava’ of Arayi.

However, the natives belonging to Puri do refer to Lord Jagannath as Purushottama. They also regard the driftwood as their savior symbol and subsequently Hindu texts of the area explain the Supreme Being existing in everything. Thus, the Vedic link can be debated or interpreted differently but the overlap in the ideas is there.

According to the Puranas, the Narasimha Avatar of Lord Vishnu emerged from a wooden pillar. It is thus considered that Jagannath is venerated as a wooden idol or Daru Brahma with the Shri Narsimha hymn devoted to Narasimha Avatar. The Ratha Yatra ceremony of Lord Jagannath goes as far back as the Puranas. Detailed descriptions of the festival can be seen in Padma Purana, Brahma Purana and Skanda Purana. 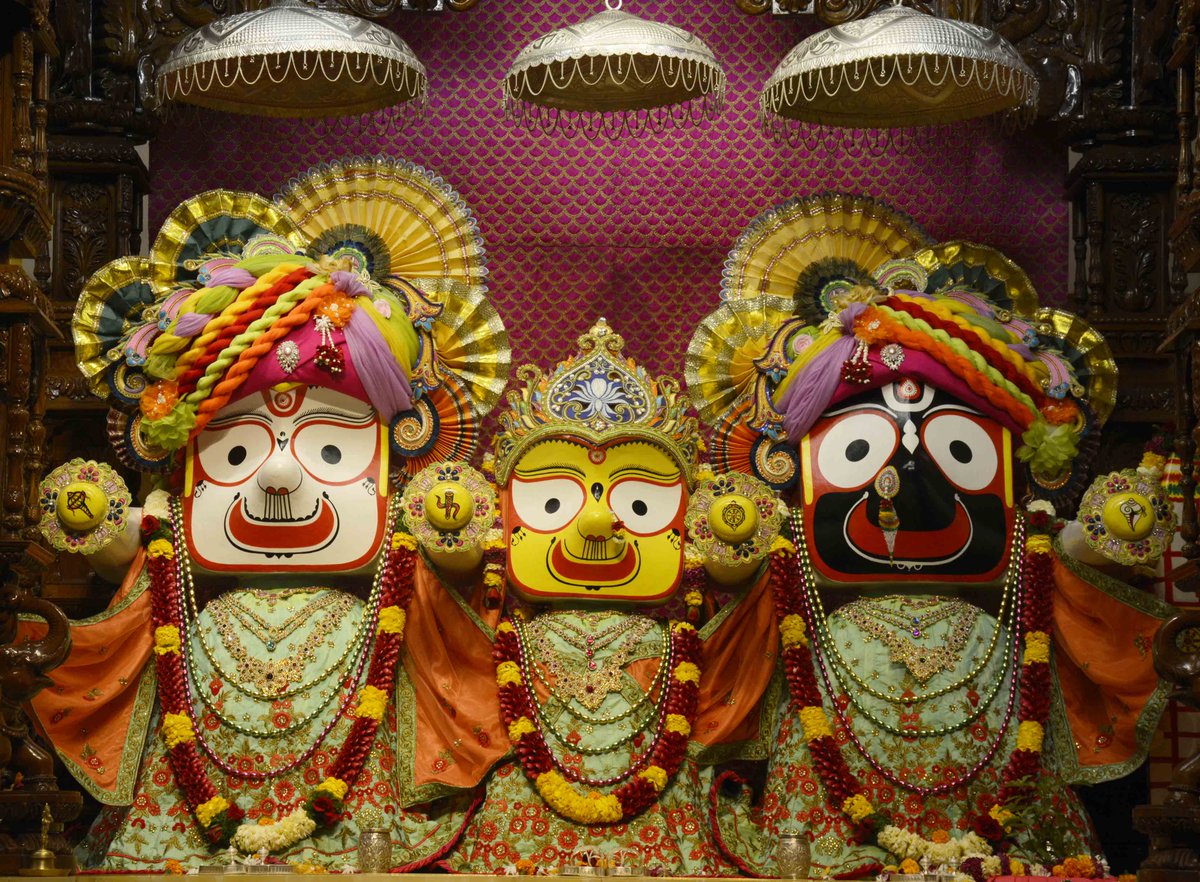 The idols of Shri Jagannath are effectively carved out of a neem wooden stump and are brightly painted. Unlike other divine beings in Hindu Dharma, he is not depicted in human form. The pillar that stands for his face is shown merging with the chest. The huge circular face is believed to denote someone who is Anadi (without beginning) and Ananta (without end).

This wooden stump is fashioned in a way to showcase two huge symmetric circular wooden eyes with no eyelids. One eye represents the sun while the other eye stands for the moon. Two additional stumps on either side of the main stump serve as hands of the Lord while the legs, neck, and ears are noticeably not present. The stump is then further ornamented to generate the complete look of Shri Jagannath. He is depicted with a Vaishnava U-mark on his forehead. His complexion is dark and other facial features represent an abstraction of the cosmic form of the Hindu deity Krishna.

In the majority of the Lord Jagannath shrines in Eastern India and all his major temples located in Puri, Odisha, the deity is featured with his brother Balabhadra and sister Subhadra. When portrayed with his siblings, he is recognized with his circular eyes as opposed to the oval or almond shape of the other two abstract icons. Moreover, his icon is dark in color while Balabhadra’s face is white and Subhadra’s image is yellow. Another difference is that Lord Jagannath’s head is flat when contrasted with the semi-circular carved heads of the other two deities. When Lord Jagannath is portrayed without his companions, you can only see his face and not his arms or torso.

They come with Sudarshana Chakra, the legendary weapon of Lord Vishnu. Around the same height as Balabhadra, red in colour made from a wooden pillar and clothed, it looks different from its conventional depiction as a chakra in other Vishnu shrines. 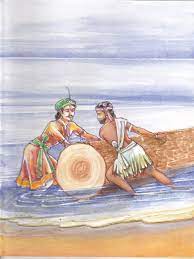 As per the legend, in Satya Yuga, a king named Indrayumna was an avid worshipper of Lord Vishnu and desired to construct a temple in his honor. Since he was not aware of how to create the idols, he prayed to Lord Brahma to seek his counsel. Pleased with his prayers, Lord Brahma eventually showed up and recommended him to obtain the blessings of Lord Vishnu and seek out the answer.

Thus, when the ruler called out to Lord Vishnu, the latter materialized in his dream and told him to pay a visit to Bankamuhana to look for a log of neem wood. Thus, the king was offered a hint about the material he would have to utilize for creating the idols. Then, the ruler hurried to the place to look for the log stated by Vishnu in his dream. But he did begin to ponder as to who would create idols out of it.

Indrayumna King selected numerous sculptors for this challenging task but no one could be successful in cutting the wood as the tools broke. The ruler was extremely apprehensive that he would not be able to construct the holy shrine and was dejected. Later, the architect of Gods – Lord Vishwakarma – emerged in front of him by disguising himself as an artist called Ananta Maharana. Even though he offered to build the sculptures, he had one condition. He told the king that until he says so no one is allowed to see him or open the doors of the workshop.

Many days, months and even years went by. The ruler was interested and keen to assess the progress. When the king eventually unlocked the doors after growing impatient, the demigod on viewing the ruler, disappeared leaving the three unfinished idols of Jagannath, Balbhadra and Subhadra.

Disturbed by the thoughts of not being able to obtain complete idols of the deities, the ruler invoked Lord Brahma and prayed to him. The latter emerged and asked the king to not be upset. He stated that the sculptures are lovely as they are and that Lord Vishnu is very happy with them. Additionally, he also promised the ruler that he would officiate over the inaugural puja as the priest and summon Lord Vishnu.

Thereby, King Indradyumna achieved his dream and the holy shrine of Puri Jagannath was built thanks to the blessings of both Lord Brahma and Lord Vishnu. Remarkably, Lord Brahma had also assured the ruler that the idols of the temple constructed by him would draw worshippers from all over the world and end up becoming the chief attraction. Contrasting with the images and figures of Lord Vishnu or Shri Krishna, the Jagannath Puri idol features huge eyes and a square-shaped head with an elongated body and no limbs, neck, or ears. 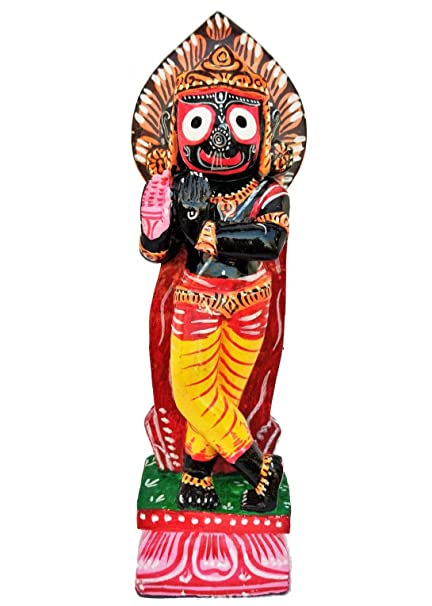 Lord Jagannath is believed to possess all the qualities embodied by all the avatars of Krishna/Vishnu. This faith is honored by dressing the deity and venerating him as various avatars on special occasions. Shri Jagannath is renowned to be exceptionally compassionate and kind. As per the mythology, he fell ill for a fortnight since he had taken the fever and sufferings of one of his worshippers.

Some believe that the mount or vahana of Lord Jagannath is Garuda or a massive eagle-like mythical bird. This divine eagle also serves as a vehicle to Lord Vishnu. Since Shri Jagannath is considered to be one of the incarnations of Lord Vishnu, Garuda is the former’s mount as well. The devotees believe that other birds are not seen flying around the sacred Sri Jagannath Temple at Puri, Odisha because the king of birds is known to be the vehicle of the deity.

The values of Jagannathism adhere to the socio-economic traditions of India. Even though Lord Jagannath’s black complexion is similar to that of Sri Krishna, he is known to stand for the common farmer on the field who is tanned due to being exposed to the boiling heat all day. On the other hand, his brother Balabhadra embodies the blue-blood king and thus has a fair glow on his face. His sister Subhadra, represents the common woman who devotes most of her day beside the hearth and thereby is characterized with a yellow look.

This segregation is also palpable based on the food presented to the deities. Lord Jagannath is offered coarse brown rice with plain vegetables and lentils. This is because a huge section of the Indian population experiences stomach illnesses and acidity. His day ends with Dahi Pakhala (fermented rice with curd), which is typically taken by farmers to overcome the blistering heat and to have a sound sleep at night. On the other hand, Lord Balabhadra consumes Kanika (fine rice with ghee and dry fruits) and Subhadra eats food heavily mixed with spices (similar to food taken by a common Indian woman). 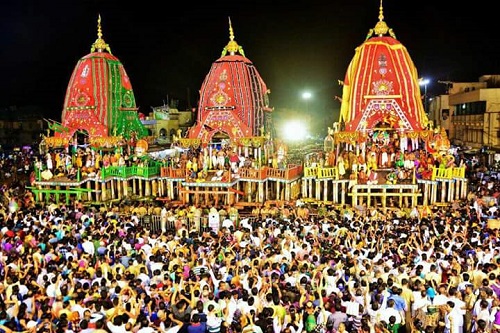 A huge number of traditional festivals are celebrated by the worshippers of Jagannath at the Jagannath Temple, Puri, Odisha. Out of those many festivals, thirteen are extremely vital. But the most significant festival is the Ratha Yatra.

Millions of devotees assemble to view the yatra every year. Lord Vishnu, in his Jagannath form, along with his brother Balbhadra and sister Subhadra, are carried in chariots from the Jagannath temple to Gundicha Temple. The chariot of Balbhadra leads, with Subhadra’s chariot in the middle and then finally the chariot with Jagannath moves. The chariots remain at the Gundicha Temple for a couple of days and on the ninth day, they are brought back to the Jagannath temple. Devotees walk along the procession as they sing prayers and dance in groups.

Lord Jagannath is easy to please and rewards worshippers who pray to him with utmost sincerity.

It is said that when you pray to Shri Jagannath with utmost sincerity and a pure heart, he will fulfill all the desires of the worshippers as he cannot see his devotees in pain. He will eliminate any obstacle coming in your way.