The Hindu deity Lord Shiva is believed to be one of the three main Gods of Hinduism, with the other two being – Lord Brahma and Lord Vishnu. These three deities formed the Holy Trinity. While Lord Brahma was considered to be the creator, Lord Vishnu was the preserver and Lord Shiva was the destroyer.

Shiva is deemed to be one of the most complicated divinities of India and apparently possesses contradictory traits. He is said to be the destroyer as well as the restorer; the great ascetic as well as the representation of sensuality; the compassionate herdsman of souls and also the enraged avenger.

Lord Shiva is known for numerous manifestations. One of them is Lord Khandoba. Let us know more about this deity:

Who is Lord Khandoba? 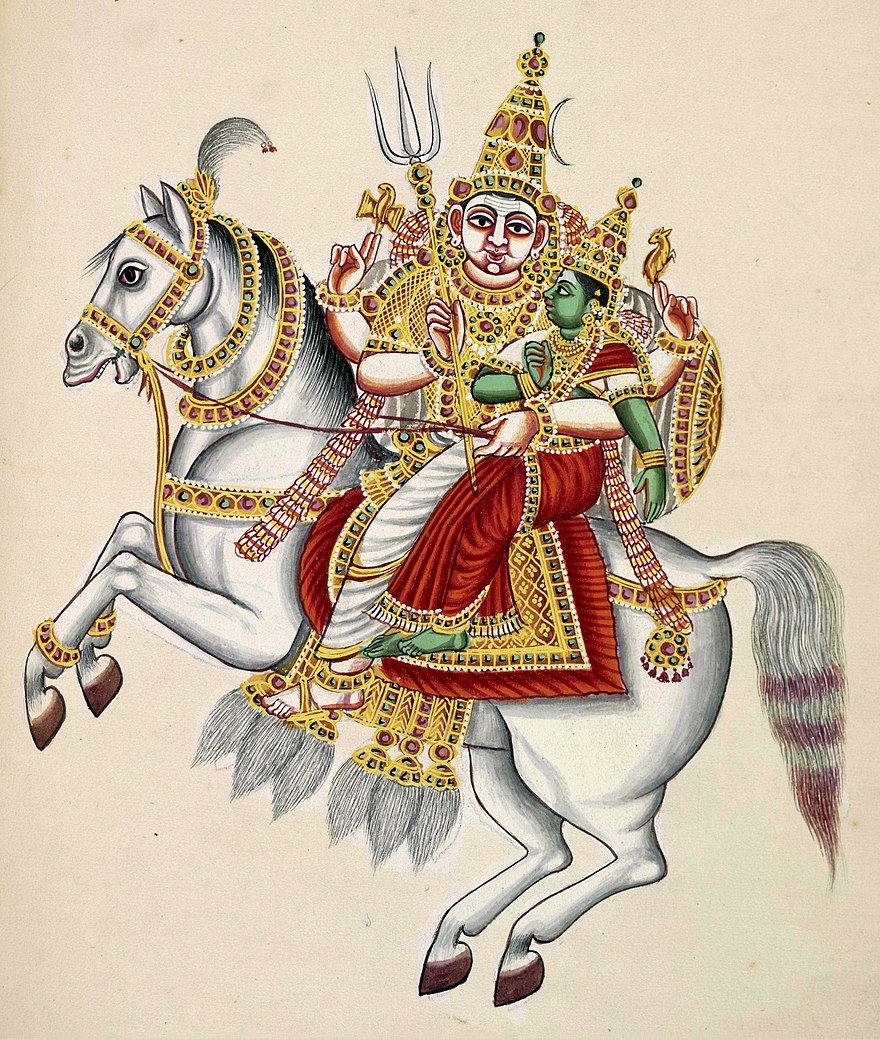 Lord Khandoba is believed to be a form of Lord Shiva, chiefly in the Deccan plateau of India, particularly in the state of Maharashtra as well as North Karnataka. He is often considered to be the most famous Kuladaivat (family deity) in both Maharashtra as well as North Karnataka. He is also deemed to be the patron divinity of specific warriors, farming castes, Dhangar community and Brahmin (priestly) castes including numerous hunter/gatherer tribes (Bedar, Naik) that are local to the hills and woods of this area.

Worshipping Lord Khandoba is believed to also be connected to Hindu as well as Jain traditions and also brings together all communities, regardless of caste and creed, including Muslims. Khandoba went from a folk deity into a complex God with the traits of Lord Shiva, Bhairava, Surya and Kartikeya (Skanda). The chief site of Khandoba worship is Jejuri in Maharashtra.

The term ‘Khandoba’ is derived from the words ‘khadga’ (sword), the weapon wielded by the deity to slay the asuras, and ‘ba’ implies ‘father’. In Sanskrit, Khandoba is believed to be the Martanda Bhairava or Surya, an amalgamation of the solar divinity Martanada and Shiva’s fiery form Bhairava. The name ‘Mallari’ or ‘Malhari’ is divided as ‘Malla’ and ‘Ari’ (enemy), thereby implying ‘the foe of the Malla’.

Khandoba is occasionally recognized as Muneeshwara of Dharmapuri of Telangana. Some of the other names comprise Khandu Gavda, Mhalsa-Kant (husband of Mhalsa), and Jejurica Vani.

The tales of Khandoba viewed in the text Malhari Mahatmya and also recounted in folk songs, talk about his win over the Asura Manimalla and his marriages. The legends are believed to be from the chapter Kshetra-Kanda of the Sanskrit text – Brahmanda Purana but are not incorporated in the standard editions of the Purana. 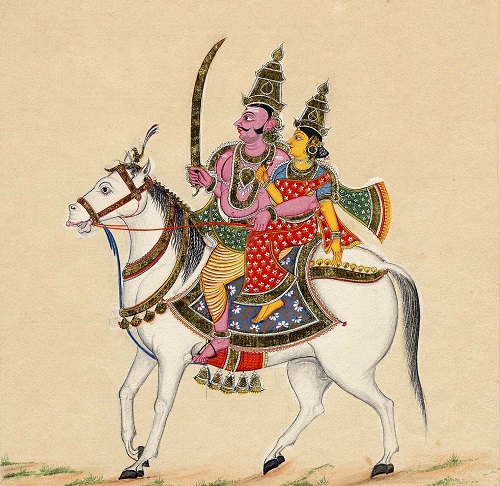 Generally, Lord Khandoba is showcased in the form of a linga or is demonstrated as a warrior riding on a bull or a horse. In popular depictions of Lord Khandoba, Mhalsa is portrayed sitting in front of Lord Khandoba on his white horse. His consort Mhalsa is stabbing an asura’s chest with a spear, while a dog is shown biting his thigh, and the horse is hitting his head.

The other demon is clutching the reins of the horse and assaulting Lord Khandoba with a club as the deity is climbing down from the horse and wielding the sword to attack the asura. In other portrayals, Khandoba is depicted sitting on a horse with the heads of the demons crushed beneath the horse’s hooves or their heads underneath Khandoba’s knees.

In specific idols or murtis, Lord Khandoba is showcased with four arms, holding a damru (drum), Trishula (trident), Bhandara-Patra (turmeric powder-filled vessel) and wields a sword. Lord Khandoba is generally portrayed as a Maratha Sardar or a Muslim Pathan. Often, the deity is illustrated as a warrior sitting on a horse with one or both of his wives and is seen with one or more dogs. 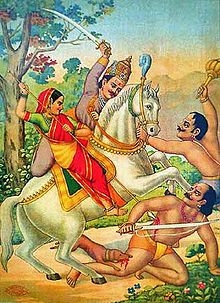 According to the tale, the Asura Malla and his younger brother Mani became invincible and powerful by performing intense and rigorous penance that was devoted to Lord Brahma. After numerous years of conducting sincere Tapas, Brahma granted the siblings boons. With incredible power at their disposal, Mani and Malla began attacking saints, Devas (demi-gods), and humans. They created a ruckus and disrupted the peaceful life on both the earth as well as heaven. They even seized and took control of the Manichurna Mountain, the residence of numerous sacred individuals.

Not able to withstand the torment by the Asuras, the humans, saints and demigods approached Lord Shiva for help. Lord Shiva arranged for several lieutenants from his matted locks to battle Mani and Malla and proceeded to Manichurna Mountain. He manifested into Bhairav, a terrifying form of Lord Shiva, and Parvati assumed the form of Mhalsa. In specific regions, Mhalsa is considered to be an incarnation of Mohini and Parvati.

After taking on the Bhairav Avatar, Lord Shiva rode the Nandi bull and lead an army of the gods. Martanda Bhairava is showcased as shimmering like the gold and sun, coated in turmeric, also referred to as Harida, is three-eyed, with a crescent moon on his forehead. The battle started on the Amavasi day of Kartik month and concluded on the sixth day of Margashirsh.

The Asuras Mani and Malla battled hard for six days. The demon army was killed by the gods and eventually, Mani and Malla fell on the feet of Lord Shiva and were eliminated. While he was dying, as an act of repentance, Mani presented his white horse to Khandoba (Shiva) and asks for a boon. He requests that he be present in every temple of Khandoba, the human-kind is bettered, and that he be bestowed an offering of goat flesh. After the boon was given, Mani was able to convert into a demigod.

When Malla was asked if he wanted a boon, he demanded the world be destroyed and wanted human flesh. Enraged at this unreasonable request by the Asura, Lord Khandoba beheads him and his head tumbles down the temple stairs where it was believed to be crushed underneath the feet of the worshippers. The tale further talks about how two lingas materialized at Prempuri, the site where the demons were slain. This occurred on the sixth day of Margashirsh and is commemorated as Chamba Shasti. It is said that Lord Shiva made a decision to live here in the form of a Swayambhu lingam after slaying the Asuras.

It is significant to note the elevation of Khandoba from a folk God to a Shiva avatar, a deity of the traditional Hindu pantheon. Khandoba’s wives - Mhalsa and Banai are recognized as Parvati and Ganga. Some versions suggest that Hegadi Pradhan, the minister and brother-in-law of Lord Khandoba and brother of Lingavat Vani Mhalsa, the loyal dog that assists the deity in slaying the demons, the horse offered by Mani and the demon brothers are believed to be avatars of Vishnu, Nandi and the Asuras Madhu-Kaitabha respectively.

There are other myth variants that discuss how Lord Khandoba overthrows a single Asura named Manimalla, who presents him with a white horse, occasionally referred to as Mani, to the deity. Other legends portray Mhalsa (or Parvati) and Banai or Banu (or Ganga) as attempting to assist Lord Khandoba without success in the battle to amass the blood of Mani since every drop was creating a new demon. Eventually, the dog of the deity gulps down all the blood. Occasionally, Mhalsa, or rarely Banai, is mentioned as sitting behind Khandoba on the horse and combating with a sword or spear.

A couple of the legends depict Lord Khandoba as a ruler who reigns from his fortress of Jejuri and holds court and undertakes hunting expeditions and more.

A horse or bull is believed to be the vehicle or mount of Lord Khandoba. Dogs are known to surround him and venerate him. There is also an assumption that the bull is considered to be Nandi and he takes the form of a horse.

Lord Khandoba has two wives who are women belonging to separate communities – Mhalsa and Banai. His first wife – Mhalsa – is from the Lingayat merchant (Vani) community and his second wife Banai is believed to be from the Dhangar (shepherd caste). Mhalsa is said to have had a traditional ritualistic wedding with Khandoba. On the other hand, he had a love marriage to Banai. Mhalsa is depicted as an envious woman but a great cook whereas Banai is deemed to be erotic, steadfast but does not know how to prepare food. You will often find many folk songs discussing their tiffs. Mhalsa is believed to stand for culture while Banai exemplifies nature. The God-King Khandoba is said to position himself standing between them.

There are eleven main centers of worship of Lord Khandoba where the deity is to be referred to as ‘jagrut’ or ‘awake.’ Six of the temples are located in Maharashtra and the remaining are housed in northern Karnataka. Khandoba’s temples appear similar to forts and the capital of his kingdom is named ‘Jejuri’. 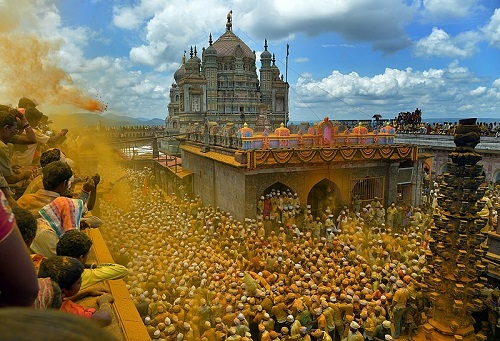 It is the leading and principal centre of worship of Lord Khandoba. It is located at a distance of 48 km from Pune, Maharashtra. There are two temples: the first shrine is an old temple, referred to as ‘Kadepathar’. This temple is challenging to climb. To reach this temple, you have to climb around 750 steps. You will find a self-manifested Linga of Lord Khandoba and his wife Goddess Mhalsa at this holy site.

The second shrine is believed to be the newer and more renowned Gad Kot temple, which is easier to hike. This temple contains approximately 450 steps, 18 Kamani (arches), and around 350 Deepmalas (lamp pillars). As you begin climbing the steps, devotees will catch a glimpse of the real colour of Jejuri i.e., yellow. You will get the feeling of stepping into a world filled with yellow colour.

Both temples are built with fort-like structures which gives them a royal feel.


Also referred to as the Bhandara festival, it is an auspicious occasion of golden turmeric powder (Bhandare) devoted to the local deity Khandoba who is typically a Kuladaivat (family deity) for many Indians. It is tradition for a newly married couple to visit the Khandoba temple in Jejuri to pay their respects after their wedding. The worshippers believe that Khandoba is also viewed as the God of Fertility. This is why many couples visit the holy site to wish for offspring.

The main ritual on this holy day is the offering of Bhandara – turmeric powder. Huge amounts of Turmeric powder are hurled in and around the shrine on this day. Worshippers effectively bathe in yellow colour. Devotees are also known to perform penance on the day.

This festival is celebrated at the Jejuri Khandoba Temple and in 2022, it will be held on January 31st and May 30th. 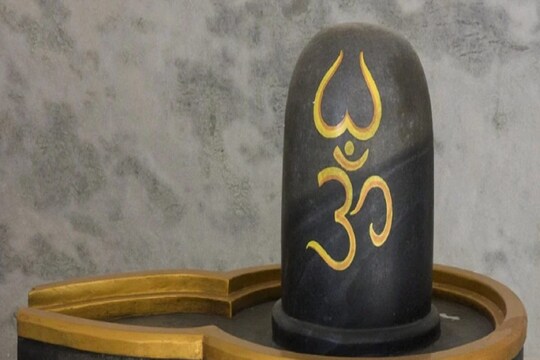 It is a six-day festival meant for venerating Lord Shiva. This auspicious occasion is commemorated by offering prayers to Lord Khandoba who is a manifestation of Lord Shiva. The festival occurs on the sixth day in the Margashirsha month during the Shukla Paksha.

It is believed to be one of the most significant festivals observed in the states of Maharashtra and Karnataka. The festival holds a lot of value in the Khandoba temple located in Jejuri.

The Champa Shashti festival is celebrated on 29th November 2022.