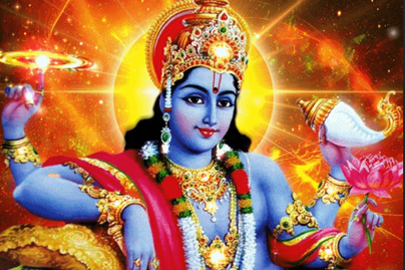 The Hindu Lunar calendar is divided into two different phases of the Moon. One phase is waxing Moon which is known as 'Shukla Paksha', in which the Moon grows in size (visually) and brightness everyday bit by bit and the other phase is waning Moon, ‘Krishna Paksha’, when the brightness of Moon diminishes in size everyday post the Full Moon. Each phase is of 15 days respectively. 'Ekadashi' is the 11th day in each phase of the Moon, which means that there are two Ekadashis in a month. The term Ekadashi means the 11th lunar day in each fortnight of the Shukla Paksha and the Krishna Paksha respectively.

To further explain the term 'Tithi' (as per the Hindu calendar), it means one Lunar day which means the time it takes for the Moon to travel a certain distance. So Ekadashi is the 11th Lunar day or Tithi. In the Shukla Paksha i.e. the brighter phase of the Moon, on Ekadashi, the Moon looks three fourth (3/4th) and on the Krishna Paksha Ekadashi, the Moon appears three fourth (3/4th) dark. There are 24 Ekadashis in a year, with the exception of Leap year when there are 26 Ekadashis.

Along with Hinduism, Jainism too considers Ekadashis to be holy, which has spiritual connotations. It is said that merely by hearing the names of the various Ekadashis one will be free of all sins. Lord Vishnu is worshipped on Ekadashi. The day is observed by fasting from Sunrise of Ekadashi Tithi to the sunrise of the following day. Fasting on the Ekadashi is an important ritual of this day. The best form of fasting for Ekadashi is to go without water or food. People who do not want to keep a full fast are recommended to have a fruit-based diet(Phalahar) or fruit and Milk or milk product diet. Consumption of Rice, Grains and Beans are prohibited on this day.

The Mohini Ekadasi is on the 11th day of the bright fortnight or Shukla Paksha of the month Vaisakha (Hindu calendar) which falls in May- June as per the Gregorian calendar. It is also known as Vaisakha Shukla Ekadasi.It is said that Lord Vishnu took the form of an Apsara, the beautiful and enticing Mohini, on this tithi, to get the Amrit Kalash, the elixir of life, away from the Asuras, after the Samudra Manthan.


Those who observe the fast must break it after sunrise the next day of Ekadashi. It is to be noted that one should break the fast (Parana) within Dwadashi Tithi. Another important consideration is that one must not break the fast during Hari Vasara which is the fourth duration of Dwadashi. The best time to break the fast is pratah Kala (morning).

Observing fast on Mohini Ekadasi absolves sins and all sufferings. Legend has it that Lord Shri Ram had observed Mohini Ekadasi when He was told about the merits of this Ekadasi by Sage Vasishtha. This Ekadasi also removes the veil from the illusions which attach us to the material existence.

The ancient text has Lord Krishna explaining to Yudhisthira about the importance where the Lord has said it is greater than all sacrifices or charity to the needy or the sacrifice of Horses (Ashvamedha) or even seeing Lord Vishnu Himself. It is said that one who observes fast on this day, adhering to the rules, will be liberated and get a place in Lord Vishnu's abode. 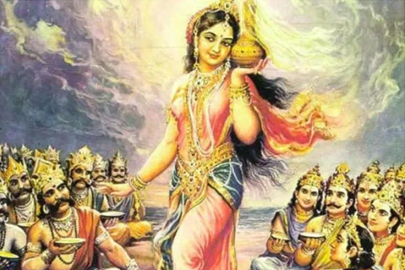 Bhadravati, on the banks of the Saraswati River, was ruled by the capable Chandravanshi King Dyutiman. He was religious, pious and was wise. There was an extremely wealthy merchant called Dhanapala who lived in Bhadravati. He was a devotee of Lord Vishnu, used to contribute by doing charity of food grains etc. to the citizens of Bhadravati. He had 5 sons- Sumana, Sadbuddhi, Medhavi, Sukriti, and Dhrishthabuddhi.

Drishthabuddhi was involved in all sinful activities, starting from being with prostitutes, gambling, illicit sex and other nefarious activities and wasted his father's wealth on all the things to please his senses. An angered Dhanapala expelled Dhrishthabuddhi from the house because of his atrocious behaviour.

Within a short time, Drishthabuddhi finished all the money and ornaments inherited by him and was abandoned by the prostitutes. This led him to start stealing money from the citizens and once the King's constables caught him, whipped him and threw him out of the boundaries of the kingdom.

He wandered around the forest killing and eating animals and was in a miserable state. Once during the month of Vaisakh, wandering around he reached the Ashram of Kaundinya Muni. The pious sage had just taken his bath in the Ganges river and his body was still wet when Drishthabuddhi arrived there. Some droplets fell on Drishthabuddhi which miraculously brought the sinner back to awareness and into his good senses. With folded hands, he bowed down to Kaundinya Muni and asked what he should do to relieve him of all the miseries. The Sage asked him to observe fast on Mohini Ekadasi, which was due to come shortly then and told him all the rules and regulations to follow.

Drishthabuddhi observed fast on Mohini Ekadasi as per what Kaundinya Muni had guided and was relieved of all sins. Later he also was rewarded as he got a place in Lord Vishnu's abode.The story ends with Lord Krishna telling Yudhishtira that whoever even listens about the merits of Mohini Ekadasi is blessed with merits.

Rituals: What to do on Mohini Ekadasi?

The rituals of Utpanna Ekadashi are specified in the ancient Hindu texts and is said to have been specified by Lord Sri Krishna while answering Yudhishthira's(one of the Pandava brothers from Mahabharata) query. The rituals are:

1) One day before Mohini Ekadashi, which is the 10th day of the Krishna Paksha, the person should clean his teeth thoroughly in the afternoon and have supper at Sunset hour.
2) On the morning of Mohini Ekadashi, the person should intend on keeping the fast meticulously. The person should have a bath in a river (which is said to be most purifying) or a lake and in both not being available, bathe with pond water.
3) While bathing the person should smear mud on his/her body with chanting a prayer to Mother Earth.
The prayer: O Asvakrante! O Rathakrante! O Vishnukrante! O Vasundhare! O Mrttike!
Translation: O Mother Earth! please remove all my sins accumulated from past lives so that I may enter the abode of the Lord Vishnu the Supreme Lord)
4) Worship Lord Govinda with complete dedication and Offer an excellent 'Bhog' (food to Divine) along with flowers and other things of the offering.
5) Light a lamp at home in honour of the Lord.
6) Chant or sing praises of Lord Vishnu throughout the day and remain in a most blissful state during the fast.
7) Stay awake through the night in full consciousness. If possible play musical instrument throughout the night to please the Lord.
8) The next morning the person should give charity to Brahmanas and respectfully ask them for forgiveness for any offence.
9) For people who keep a complete fast till the next day, one should say the prayer - "O Pundarikaksha, O lotus-eyed Lord, now I will eat. Please shelter me".
10) After the prayer the devotee should offer flowers and water at the lotus feet of Lord Vishnu and request the Lord to eat by chanting the mantra of eight-syllable, thrice. To garner the full merits of the fast, the devotee should have water which has been offered to the Lord.
11) Fire sacrifices can be performed if the devotee chooses to do so
The day of Ekadashi till the next morning the devotee should involve in taking baths, singing and chanting praises of the Lord and worship Him with complete devotion, involve in activities of devotion and doing charity.