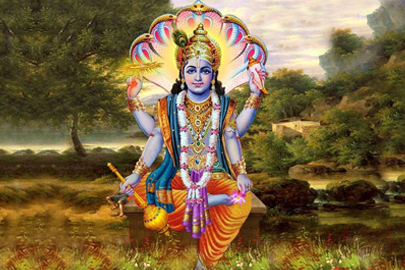 Ekadashi is an important religious fast observed by the Hindus, in India and other parts of the World. As per the Lunar calendar of the Hindus, there are two Moon cycles, namely, Shukla Paksha, the waxing Moon fortnight and the Krishna Paksha, the waning Moon fortnight. Ekadashi means the 11th day in each of the Moon cycles. Therefore, Ekadashi falls twice every month and there are 24 Ekadashis in a year. Ekadashi fasts are observed in dedication to Lord Hari/Vishnu.

The Ekadashi fasts are known as the best form of fasts and the day is considered auspicious and holy. Devotees who observe the fasts with complete dedication, by following the rules strictly, are blessed by Lord Vishnu with happiness, good health, success, prosperity, relationship harmony, abundance and is said to pave the way to attaining liberation. Besides observing the fast, keeping awake through the night of Ekadashi, singing praise and praying to Lord Hari, is an important part of the rules of Ekadashi fast. Falling asleep at night makes the results of Ekadashi fast null and void. The Vaishnavs observe the Ekadashi fasts religiously, some observing dry fast, which is said to be the form of fasting on that day which pleases Lord Vishnu most.

In the month of November - December (Margashirsha month as per Hindu calendar) on the 11th day of Shukla Paksha or waxing Moon phase, the Ekadasi which takes place is called Mokshada Ekadashi.

On this auspicious day, in the battlefield of Kurukshetra, Lord Sri Krishna imparted the knowledge of Srimad Bhagavad Gita to Arjuna and therefore is also called as the Gita Ekadasi. It is said that gifting a Bhagavad Gita on this day to anybody is sure to garner the blessings of Lord Krishna. Mokshada Ekadasi is also referred to as Vaikuntha Ekadashi as it is believed that Lord Vishnu's abode, Vaikuntha is open to allow anyone who observes and worships Lord Vishnu on this Ekadashi. In the Southern states of India, this Ekadashi is known as Mukkoti Ekadashi.

Those who observe the fast must break it after sunrise the next day of Ekadashi. It is to be noted that one should break the fast (Parana) within Dwadashi Tithi. Another important consideration is that one must not break the fast during Hari Vasara which is the fourth duration of Dwadashi. The best time to break the fast is pratah kala (morning).

The Mokshada Ekadasi/Vaikuntha Ekadashi/ Gita Ekadashi/ Mokkoti Ekadasi is a powerful Ekadasi which if followed by a devotee meticulously by fasting and following the rules can dissolve all sins and help to attain salvation.

On Mokshada Ekadasi, Lord Damodara (367th Name of Lord Vishnu from the Vishnu Sahasranama) is worshipped. Lighting a Ghee (clarified butter) Lamp or Diya and lighting of Incense sticks, Tulsi buds or manjaris and fragrant flowers form an important part of the of worshipping Lord Damodara in this Ekadashi.

As per what Lord Krishna has informed Yudhistira about the Vaikuntha Ekadasi, is that merely hearing about the story of Mokshada Ekadasi/Gita Ekadasi, the forefathers can be released of their sins, their suffering in hell will be over and their path to Heaven will be cleared. Just as the Utpanna Ekadashi story had been narrated to Yudishtira by Lord Sri Krishna, the story of Mokshada Ekadasi too is narrated by the Lord himself.

Maharaja Vaikhaanasa, a King of Kings in compassion and kindness, ruled a beautiful kingdom named Champaka-Nagar, which was the habitat of Vaishnavas (community of Lord Vishnu's devotees). King Vaikhaanasa was very loved by the people in his kingdom because he used to treat them as his own children.

Once the King dreamt of his father being tortured badly in hell which was ruled by Yamaraja. This upset Maharaja Vaikhaanasa terribly and he cried at the kind of torture that he saw his father going through. The Brahmins in that capital city were proficient in the four kinds of Vedas. So the King went to the learned Brahmins and described his dream to them, the agony that he saw his father going through and the cry for help by his father. The King told the Brahmins that the dream had upset him deeply and all the wealth, his caring family etc everything seemed bleak and dismal as he was feeling the pain which he saw his father suffering through in hell. King Vaikhaanasa then asked the Brahmins what charity or fast/ penance/yajna/ ritual he needed to do which would liberate his forefathers. On hearing their beloved King, the Brahmanas suggested him to go to the nearby mountain where there was an ashram of a great sage called Parvata Muni, who was a 'tri-kala-jnana', which meant the one who knows the past, present and future of things. The Brahmins assured their King that Parvata Muni would be able to give him exact guidance of what needs to be done.

King Vaikhaanasa, immediately set off for the ashram of Parvata Muni. When the king met Parvata Muni, he asked the King whether all the ministries, military, treasury of his kingdom was running well. Maharaja Vaikhaanasa replied in the affirmative and told the sage about his distress on seeing the dream of his father. The King requested Parvata Muni to provide a solution to liberate his father of the torture of hell. The powerful Sage shut his eyes and within a few minutes told the King, that the reason why his father was suffering in hell is because in one of the previous births of his father he had committed an unpardonable sin. Parvata Muni then informed King Vaikhaanasa that his father in that previous lifetime had forcefully enjoyed sex with his wife during her menstrual cycle. His wife had protested, resisted and even screamed for help but the husband did not stop. Parvata Muni told King Vaikhaanasa that because of this heinous sin, the King father was now suffering in hell. Hearing this, the kind king asked for guidance from Parvata Muni.

Sage Parvata Muni advised the King to observe a full fast and follow all the rules of the Ekadasi which falls in the Shukla Paksha (waxing moon) in the Margashirsha month and, suffering in hell then it will help to liberate his father.

In the tithi of Ekadashi, King Vaikhaanasa followed the advice of Parvata Muni and also made his family and relatives observe the Shukla Paksha, Margashirsha month Ekadasi full fast, and then like a dutiful son, immediately past on the merits of the Ekadashi observance to his father. Flowers from heaven showered on King Vaikhaanasa when he was offering his merits to his father. His father was praised by the messengers of the Demi-Gods and escorted to heaven by them. While the soul of King Vaikhaanasa, travelled from hell to the higher realms of heaven, he blessed his son, the king, to have a blessed and auspicious life. The elevated soul, at last, reached his destination, his actual home and served the Divine Lord Vishnu. The Ekadashi observed by the good King was Mokshada Ekadashi.

Having completed the narration, Lord Krishna told Yudhishtira, that observing the fast of Mokshada Ekadasi as per the rules and regulations can liberate the person after death as this Ekadashi was pure. The Lord also said that the Mokshada Ekadasi fast when followed by the people in the spiritual path, it can help them attain 'Moksha'.

The rituals of Utpanna Ekadashi are specified in the ancient Hindu texts and is said to have been specified by Lord Sri Krishna while answering Yudhishthira's(one of the Pandava brothers from Mahabharata) query. The rituals are:-

1) One day before Utpanna Ekadashi, which is the 10th. day of the Krishna Paksha, the person should clean his/her teeth thoroughly in the afternoon and have supper at Sunset hour.
2) On the morning of Utpanna Ekadashi, the person should intend on keeping the fast meticulously. The person should have a bath in a river (which is said to be most purifying) or a lake and in both not being available, bathe with pond water.
3) While bathing the person should smear mud on his/her body with chanting a prayer to Mother Earth.
The prayer - O Asvakrante! O Rathakrante! O Vishnukrante! O Vasundhare! O Mrttike! (O Mother Earth! please remove all my sins accumulated from past lives so that I may enter the abode of the Lord Vishnu the Supreme Lord)
4) Worship Lord Govinda with complete dedication and Offer an excellent 'Bhog' (food to Divine) along with flowers and other things of the offering.
5) Light a lamp at home in honour of the Lord
6) Chant or sing praises of Lord Vishnu throughout the day and remain in a most blissful state during the fast.
7) Stay awake through the night in full consciousness. If possible play musical instrument throughout the night to please the Lord.
8) The next morning the person should give charity to Brahmanas and respectfully ask them for forgiveness for any offence.
9) For people who keep a complete fast till the next day, one should say the prayer - "O Pundarikaksha, O lotus-eyed Lord, now I will eat. Please shelter me".
10) After the prayer the devotee should offer flowers and water at the lotus feet of Lord Vishnu and request the Lord to eat by chanting the mantra of eight-syllable, thrice. To garner the full merits of the fast, the devotee should have water which has been offered to the Lord.
11) Fire sacrifices can be performed if the devotee chooses to do so