Rakhi A Thread of Love

» Festival Products and Pujas » Rakhi A Thread of Love 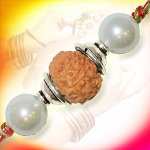 Rakshaa Bandhan stirs up one of the deepest and noblest emotions in the human breast - the abiding and chaste bond of love between the brother and the sister. The delicate cord tied by the sister to the brother on this day pulsates with this sublime sentiment. History and legends of Bharat abound in touching episodes of ladies seeking protection from far-off, unacquainted heroes, through the Raakhi.

The sister-brother relationship highlighted by the Raakhi goes far beyond the mere personal protection of a female from a male. It also implies the basic element of an amicable and harmonious social life where all members of the society look upon themselves as brothers and sisters and as children of one common motherland.

The congregational Raakhi function carries this social content. Particularly, the tying of Raakhi to the sacred Bhagavaa Dhwaj at the start of the function signifies this social and cultural aspect. Not only do the participants in the function develop a sense of love and affection amongst themselves but they also affirm their loyalty and devotion to the society of which they are the children. Their commitment to protect each other and also the society as a whole is emphasized through this simple ceremony.

In the Hindu tradition the Rakshaa has indeed assumed all aspects of protection of the forces of righteousness from the forces of evil.

It is not merely that the spirit of Rakshaa manifests itself on occasions of mortal peril to the life and honor of the beloved ones or to the society. It is not like the Home Guards or the militia which are expected to come to the rescue of the people in times of war or natural calamities. No, it is far more deep and all-encompassing. It is like the flow of bloodstream through every limb and organ of the body, carrying strength and nourishment to every cell thereof. As a result, even a small wound anywhere in the body is promptly attended to by the entire body. Every other limb spontaneously sacrifices a part of its blood and energy to heal that wound and keep that organ healthy and strong.