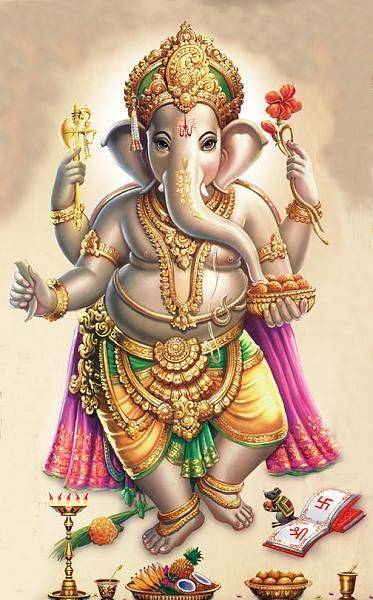 Lord Ganesha is a Hindu deity who is perhaps the most worshipped across India and by Hindus staying in other parts of the world. The popular Lord Ganapati is deeply revered and almost every house, office, shops, educational institutes have an idol of the Lord in their alter. In countries like Nepal, Thailand, Bangladesh, Trinidad, Sri Lanka too Lord Ganesha is worshipped. He is known worldwide as the 'Elephant headed God'.

Lord Ganesha is the son of Lord Shiva and Goddess parvati (Gauri). Legend has it that Goddess Parvati had created Ganesha with Turmeric and Sandalwood paste which she had used as a body scrub, manifested life into Him and considered Him to be Her and Lord Shiva's son. Lord Ganesha was told by His mother to stand guard while She was having bath and not allow anyone to enter. Lord Ganesha was not aware that Lord Shiva was His father till then and so when Lord Shiva came and insisted on entering, Lord Ganesha refused to let Him in. Lord Shiva also did not know about Ganesha being Maa Parvati's creation. When Ganesha repeatedly refused entry to Lord Shiva, He got furious and severed Ganesha's head, which flew away and fell at an unknown distance.

When Devi Parvati came out and saw what Lord Shiva had done, Devi was overwhelmed and She informed Lord Shiva that Ganesha was their son and that She wants Her son back or else She will destroy the whole Universe. Understanding the situation, Lord Shiva promised to resurrect Ganesha back to life. As Ganesha's original head could not be found, Lord Shiva set out on a search for a head assuring Devi Parvati that the first being that He finds in His search, He will bring the head of that being for Ganesha. He found an Elephant who was willing to give his life for Lord Shiva, so the Lord took the head of the Elephant and fixed it on the torso of Ganesha, bringing Him back to life. Goddess Parvati was overwhelmed to get back Her dear son. Lord Shiva announced that from that moment onwards Lord Ganesha will be the first deity to be worshipped and invoked to begin any worship/puja, rites, or occasions.

Lord Ganesha is known as the God of new beginnings and the Lord who removes all obstacles from the path of His devotees, blesses with wisdom, intellect, good fortune, name, fame, prosperity and abundance. He represents auspiciousness and so His blessings are invoked to begin any venture/work, be it a job interview, inauguration of new business, bringing home a new vehicle etc.

The iconography of Lord Ganesha has numerous meanings with each part of His Divine physical form, weapons, the Lotus flower, sweet in His hands, Moooshak (the mouse which is His vehicle) all have deep interpretations. Lord Ganesha's form resembles the Devnagari script of the 'Om' which is why He is also known as Omkara.

ganesh chaturthi is celebrated all over India, as the birthday of Lord Ganesha. In the state of Maharashtra, it is a 10 days festival celebrated with fervour and joy.

What is Ganesha Ashtottara Shatanamavali?

Below is the list of the 108 names of Ganesha in Sanskrit, written in English, with the meanings.