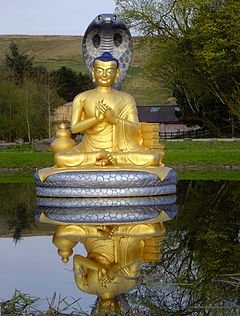 Nagarjuna was born in AD 78Â  and later on became the guru of the Satavahana kings. His origins were in Mahakosal and as a young boy Nagarjuna studied the Vedas and Vedangas. From there he traveled to Patliputra to worship Goddess Saraswati. At 18 he became a Buddhist and began an in-depth study of Ayurveda and Buddhist Philosophy.

During the time of Nagarjuna, Buddhism had seen many changes and Nagarjuna did not entirely agree with the Buddhist philosophy. He founded Shunyavad, the cult of nothingness. He had not entirely forsaken the Vedic teachings, and his Shunyavad shares many similarities with Kashmir Shaivism. He is also the founder of the Madhyamik School of Buddhism. Two of his works are well-known: Mul Madhyamika Karika and Vigraha Vyavar Vartika. His work, Suhrilekha (letters to the King), is addressed to the Satavahana king, Yashshri (AD 173-230). He also studied the Mahayana creed in great detail and later propagated it in north India. His views of Hindu and Buddhist philosophy on existentialism have comparable perspectives to the modern views of Heideggar and Sartre.

Tibetan sources too give indication of Nagarjuna™s medical works. He was a Siddha, a Sorcerer, and a powerful alchemist. His close proximity to South India is worth noting. His laboratory was on Shree Parvat, i.e., Srisailam (where the famous Shiva Temple (Jyotirling) Mallikarjuna is located) in Andhra Pradesh.

At Srisailam, he experimented on metals, especially on mercury (parad). (The other name for parad is darad and the place was called Dardistan.) Here the chemist distinguished between metals and sub-metals, and also between solvents and solubles. He found that mercury could dissolve all metals and Nagarjuna was given the appellation Rasraj.

Ayurvedic medicine prior to Nagarjuna comprised preparations largely from vegetable sources. Nagarjuna founded Ras Chikitsa or Rasayan which was vehemently opposed by orthodox vaidyas. Rasvaidyas however argued that the advantage of rasa is the small dose that is required, and the quick action, which protected the patient from imbibing foul tasting decoctions. They also argued that vegetable-based medicine becomes stale in the course of time while medicines comprising chemicals improve and become more potent. Nagarjuna invented the processes of "distillation" and "calcinations". According to Vrinda and Chakradutta he also discovered Kajjavali, the black sulphide of antimony. They were able to convert most metals into ashes and use them as powerful medicines. Makaradhwaj or Chandrodaya is a mercury compound that can work wonders with patients close to death. Like modern chemotherapy, rasa medicine is excellent but can sometimes be harmful. The preparation of ashes (bhasma) is a tedious chemical process that entails a thousand calcinations (sahasraputi). We still do not know how these processes impart special qualities to known chemical compounds.

Nagarjuna had a command over iron and mercury. The treatise on iron (Lauha Shastra) existed in ancient times and Dhanvantari and Agnivesh refer to it. Kashyap and Dhanvantari experimented on the transformation of iron into gold but were unsuccessful. Patanjali also refers to a Lauha Shastra, yet it is undeniable that the Lauha Shastra of Nagarjuna is excellent.

Nagarjuna was the first to use mercury and Kharpar (antimony?) as medicine, making them insoluble (agnisah). He found five types of mercury : The examples red and grey (slake) were good; yellow, white or multi colored (peacock color) had bad qualities and needed at least 18 treatments (sanskar) before they could be used. Regarding mercury, quicksilver, a vast amount of literature (post-Nagarjuna) is available. The Siddha sect (neither Buddhist nor Vedic) held that parad is Shiva, Mica is Parvati, gandhak is the raja of Parvati, and many fanciful theories were formulated. Mercury becomes solid and a Shiva linga can be made out of it. They worshipped a parad Shiva linga, called it Raseshwar, and started Raseshwarvad.

Few Ayurvedic alchemists have made a mercury linga even in modern times. Other sects like Pashupati, Shaiva, Pratbhingya, and Vedics were attracted to the science of mercury. Buddhism had sects like Vajrayan (vajra is iron), Lingayan, or Sahajayan, and Mantrayan. They believed that the knowledge of Mantra and Tantra must be kept a secret, but Gorakhnath discussed them and his chief disciple believed this secrecy was merely for show.

Vagbhatta lists the names of 27 Rasa Siddha Rasacharyas and Nagarjuna is one of them. Bharvi, the great poet, includes him in the quartet of four great scholars, the other three being Aryadeva, Ashwaghosh, and Kumar Labdh. He also forms part of the list of 84 Siddhas of Vajrayan.

The Arabic word alchemist, the Latin word chemist, and modern chemistry are gifts of Nagarjuna. All these alchemists were in search of the elixir of life (and still are), and of a prescription capable of transforming iron or base metals into gold. Their quest is for a drug that can serve as an antidote for all poisons (theric). Modern science can be said to be indebted to many of these futile pursuits.