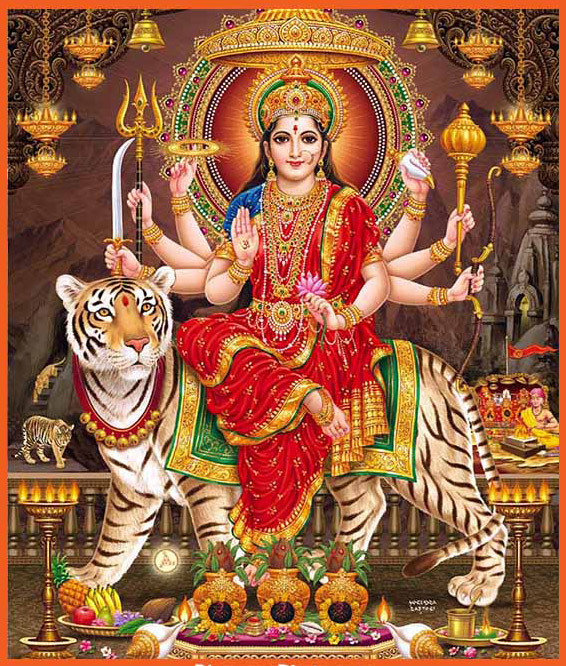 Ashada Navratri is a period of nine days and nights dedicated to the nine forms of Shakti (Mother Goddess) in the Hindu month of Ashada (June – July). The Ashadha Navratri, also known as Gupt Navratri is observed during the Ashada Shukla Paksha (waxing phase of moon). AshadaGuptNavratri is also known by several others names such as Shakambari Navratri or Shakambari Utsav, Varahi Navratri, Gayatri Navratri and Bhadrakali Navratri and Guhya Navratri in Himachal Pradesh among others. It is celebrated mostly in North India. The nine days and nights of Gupt Navratri are considered highly powerful, meritorious and beneficial for Shakti and Tantra Sadhanas and accomplishments. As most of the tantric rituals and sadhanas are done in secrecy hence the Ashadha and the Magha Navratris got the name Gupt Navratri. Ashada Gupt Navratri is particularly important for all Upasakas or worshippers of Goddess Varahi. Varahi is one of the seven Matrikas of Devi Mahatmya.

During the ancient Vedic age, Gupt Navratri was only known to few accomplished ‘Sadhaks’ or Sages. The Gupt Navratri holds special importance for Tantriks and Sadhaks. It is believed that performing ‘Saadhna’ of Goddess Durga and Dus Mahavidya Goddesses during this period will bestow them powers to accomplish their desires. Hence Gupt Navratri is mostly popular for Tantrik Sadhana and Pujas.

According to Devi Bhagwad, Navratri comes four times in a year and just as the nine forms of Goddess are worshiped during Chaitra and Sharad Navratri, during GuptNavratri worship of Dus Mahavidya Goddesses is considered highly meritorious. During Gupt Navratri, devotees and seekers worship Maa Kali, Tara Devi, Tripura Sundari, Bhuvaneshwari, Mata Chhinmasta, Tripura Bhairavi, Maa Dhumavati, Maa Baglamukhi, Matangi and Kamala Devi. The nine days and nights of Gupt Navratri are considered highly powerful and beneficial for Shakti and TantraSadhanas and accomplishments. The period holds special significance especially for people associated with Tantric activities and are into Shakti Sadhana, Bhairav Sadhana, Mahakal Sadhana among others. The nine days and nights of Ashadha Gupt Navratri are dedicated to worship of various forms of Shakti. During this period, devotees chant mantras dedicated to Goddess Durga to invoke Her divine blessings. Reciting religious scriptures like ‘Durga Saptshati’, ‘Devi Mahaatmya’ and ‘Shrimad-Devi Bhagawad’ is considered very auspicious.

Once there was a Prince of Kosala named Sudarshan who fled to the forest with his mother to save themselves from a Royal conspiracy and mutiny. In the forest, Sudarshan heard a sound and being a young boy, playfully kept on imitating it. The sound which he was repeating was the word ‘Kleem’, which was the powerful Bija Mantra of Maa Durga. As it was the time of Gupt Navratri, Ma Durga was pleased with him and blessed him to win the throne and rule the kingdom and achieve name, fame and prosperity.

Why Ashada Gupt Navratri is Observed

Legends narrate that once when Rishi Shrungi was giving advice to devotees under a Peepal tree. A woman from the crowd told the Rishi that she was not able to get the blessing of MaaDurga because of the bad activities of her husband. Her husband was indulging in all kinds of immoral activities and forcing her to participate in them. Due to this reason, the woman was unable to perform any kind of vrat, puja or rituals. She wanted to take refuge in the feet of Goddess Durga but was unable to do so because of the activities of her husband. She asked Rishi Shrungi to help her in finding the blessings of Maa Durga.

Rishi Shrungi then told the woman that people know about the Chaitra (March – April) and Sharad (September – October) Navratri. But apart from these there are two secret Navratris in a year during which the 10 Mahavidya (Dasa Mahavidya) form of Mother Goddess is invoked. Rishi Shrungi advised the woman to worship Maa Durga during the Gupt Navratri to get Her blessings. The woman performed intense penance during Gupt Navratri, because of which she achieved peace and prosperity. Her husband abandoned his wanton life and became a responsible family man. All this happened due to the blessings of Maa Durga, whom she worshipped during Gupt Navratri.

A person doing Sadhana and puja during Gupt Navratri should follow certain rules. Here are the dos and don’ts during Ashad Navratri, based on oral tradition, followed in many regions.

During Gupt Navratri, devotees of Devi observe strict fast and practice sadhana, following the austere rules meticulously, in order to attain rare occult powers. They eat only pure, Satvik food once during the day. If due to some health reasons, devotees cannot keep strict fast, partial fasting is allowed. Eating ‘Phalahaar’, i.e. only fruit, is also allowed. Prayers can be performed at dawn and dusk. Those looking to attain siddhi and moksha should meditate. Sit on seating (Asana) made of Kusha or Durva grass mat and light Diya or Oil Lamp using Cow ghee. A single wick or 9 wicks should be lit. Offer Gudhal flower (Red colour Hibiscus flower) to the Goddess. Prayers and Mantras of Goddess should be chanted using mala of Red Sandalwood or Rudraksha beads.Pray to Goddess Varahi and chant Varahi Mantras. Reading Durga Saptashati, Durga Saptashloki, ‘Devi Mahaatmya’ and ‘Shrimad-Devi Bhagawad’ gives immense blessings.

During Gupt Navratri, worship is done like any other Navratri. Taking the Sankalp of fasting for nine days, Goddess Durga is worshiped every morning and evening after performing Ghatasthapada on Pratipada. On the day of Ashtami or Navami devotees observe fast along with the worship of young girls. However, in Gupt Navratri, these rituals should not be discussed or disclosed to anyone.

Mantra to Chant, Goddesses to worship during Ashadha Gupt Navratri

The period of Ashadha Gupt Navratri is considered most appropriate to seek the grace of Mother Goddess for a specific benefit or to accomplish a particular task and for fulfilment of desires. During these auspicious days, extensive prayers are offered to earnestly request Goddess Durga for Her blessings. Reading the Durga Saptashati or Durga Saptashloki on all the nine days is considered very beneficial and meritorious.

Goddess Varahi Devi is one of the Saptamatrikas. She is the consort of Varaha avatar of Lord Vishnu. Goddess Varahi is a warrior Goddess, She assisted Maa Durga during her battle with demons Shumbha, Nishumbha and their armies. Her face resembles that of a boar. She blesses Her devotees with victory over enemies, progress, success and prosperity. Godess Varahi is also worshipped for courage and fearlessness and control over all negative vices.

Dus Mahavidya details are mentioned in Srimad Devi Bhagavatam or the Devi Purana. The ten Mahavidya are Goddess Kali, Tara, Tripura Sundari (or Shodasi-Sri Vidya), Bhuvaneshvari, Chinnamasta, Bhairavi, Dhumavati, Bagalamukhi, Matangi and Kamala. Each of the Dus Mahavidya have their own Mantra, legend and more. Navratri is considered the best time to worship the Dus Mahavidya along with the nine forms or Maa Durga.

Story about Origin of Dus Mahavidya

Dus Mahavidya are also related to Vedic astrology and are worshiped to pacify malefic effects of the nine Planets. Maa Kali is worshiped for Saturn, Tara for Jupiter, Tripura Sundari (or Shodasi-Sri Vidya) for Mercury, Bhuvaneshvari for Moon, Chinnamasta for Rahu, Bhairavi for Lagna, Dhumavati for Ketu, Bagalamukhi for Mars, Matangi for Sun, and Kamala for Venus. As per Guhyatiguyha-tantra the Dus Mahavidya are also related with the ten incarnations of Lord Vishnu, as They are the powers behind ten incarnations of Lord Vishnu.

Mentioned below are the Mantras for Dus Mahavidya Goddesses and their benefits:

Goddess Kali – Kali is the first among the ten Mahavidyas. She is worshiped for the destruction of disease, for the destruction of enemies, for protection from evil spirits and evil planets, for destroying all fears and for prosperity.
Kali Mantra - Om Kreem Kalike Svaha॥
Date - 19th June 2023
Avatar - Krishna

Goddess Bhuvaneshwari - Maa Bhuvaneshwari is the Goddess Who when pleased fulfills any and all wishes of Her devotees in the blink of an eye. She is worshiped for name, fame, growth and prosperity.
Bhuvaneshwari Mantra - Om Hreem Shreem Kleem Aim Saumh Kreem
Date - 22nd June 2023
Avatar - Vamana

Goddess Dhumavati - She is the Widow Goddess or the Goddess of death. She is worshiped for relief from all miseries and misfortunes and also for intellect, wisdom and truth.
Dhumavati Mantra - Om Dhoom Dhoom Dhumavati Swaha
Date - 25th June 2023
Avatar - Varaha

Other Most Powerful Mantras to chant during Ashadha Gupt Navratri

During Gupt Navratri, specific mantras are chanted to gain specific benefits. Some powerful mantras dedicated to Goddess Durga to be chanted during Ashadha Gupt Navratri are:

Some other Durga Mantras from Durga Saphtshati: