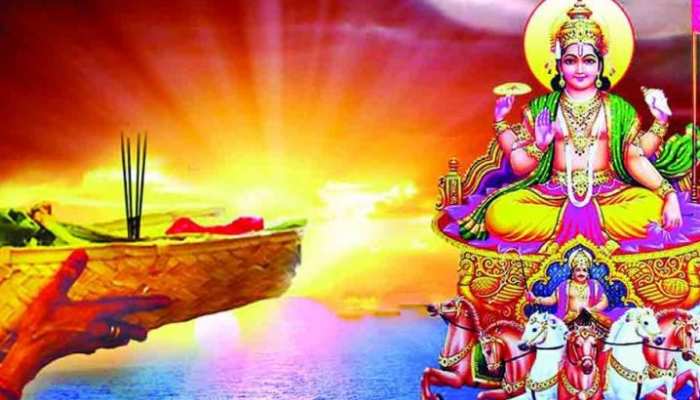 Chhath Puja is one of the most ancient festivals celebrated with great devotion and fervour by the Hindus residing in the Northern part of the country. The natives of Southern Nepal and the natives residing in Northern Part of India like the Bihar, West Bengal, Uttar Pradesh and Jharkhand. The natives of the above-mentioned regions worship the Sun God on the day of Chhat. Prayers are offered and hymns are sung in honour of Sun God. Furthermore, these native offer thanks to the Sun Lord for the healthy crops, for life on Earth and for their wishes to be fulfilled.

Since ancient times, the rituals of performing the Chhath Puja have be practiced without any alterations or modification. Days before the Puja, all the people, especially women start preparing for the puja.

The word ‘Chhath’ means six, which signifies that in the month of Kartika on the sixth day, the festival of Chhat Puja is celebrated. During this ‘Chhat’ festival, Lord Sun, the God that gives light and energy to all living beings on Earth is worshipped. 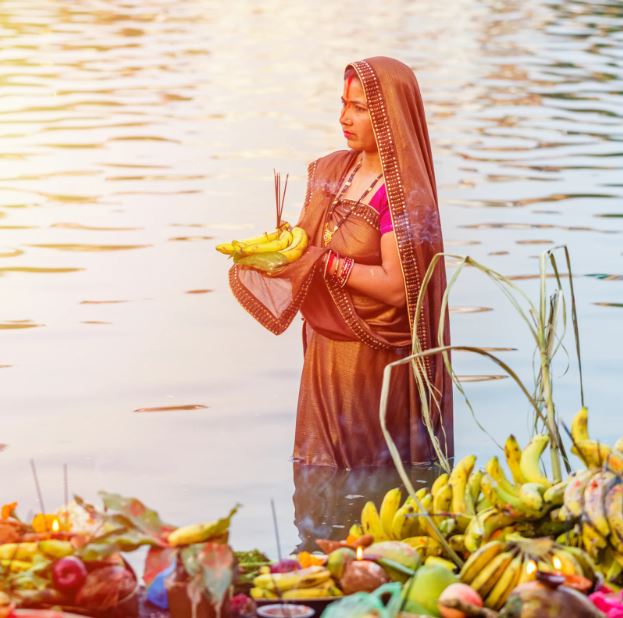 The Chhath Puja or the Chhat Parv is the one of the most ancient festivals where nature and the elements are honoured. This festival is solely dedicated to the Sun God also known as Surya Devata. The word ‘Chhath’ literally means number ‘6’ in Hindi and Nepali languages. On this occasion people also worship Chhati Maa who is also known as Shashti Mata, the daughter of Brahma and sister of Lord Surya along with Lord Surya’s wives Usha and Pratuyusha.

Chhathi Mata is also known as Maa Ranbai and Shashti as she is the sixth form of Goddess Parvati. The Supreme Chhathi Mata is known to bless couples who have problems conceiving, with a healthy offspring. In the lunar month of Kartik (October- November) on the sixth day that falls six days after the Kali Puja, the four-day long celebrations of Chhath Puja are observed.

As mentioned above the festivities of Chhath Puja are celebrated with zeal and devotion by the women in the Northern part of India and Southern part of Nepal. In recent times many men too enthusiastically participate and perform the rituals of Chhath. The four-day celebrations begin with 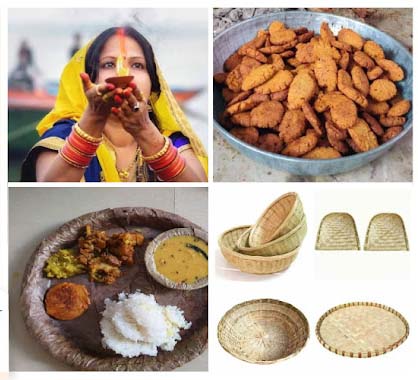 On this day, the ‘parvaitin’ (the main worshipper) takes a bath and wear fresh clothes. Once this is done, they offer prayers to Lord Surya for bestowing prosperity, well-being of the family, and to give a healthy and successful life to children. Generally, in the Chhath Puja the main worshippers or the Parvaitin are women. Though this puja is not specific to a particular gender but since ancient times, the women have been main worshippers of this festival. Once the puja is done, the Parvaitin cleans the entire house and the surrounding areas and also the pathway that leads to the Ghat. The devotees make sure that the paths to Ghat are thoroughly cleaned. The Parvaitin then cooks Satvik food which comprises of Kaduaa Bhaat (Bottle Gourd and Bengal gram lentils cooked with Arva Rice). This preparation is first offered to the deity in the afternoon as a Bhog and is then consumed by the Parvaitin. This food marks the last meal of the Parva (festival) and is eaten by the Parvaitin with an intention to ward off vengeance and other negative thoughts. 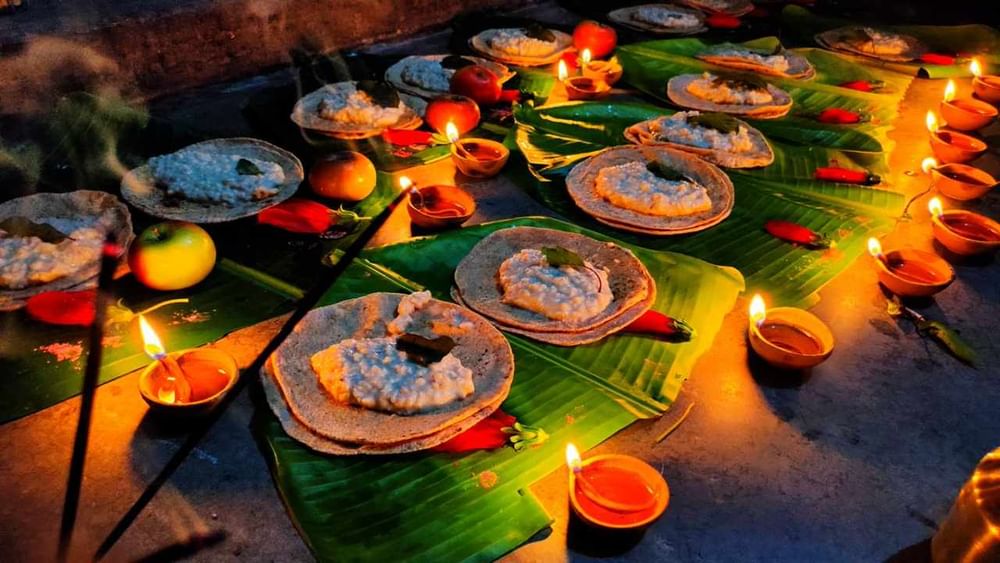 The second day of Chhath is known as Kharna. Devotees and the Parvaitin observe Nirjala fasting which means, the devotees cannot even consume water till the Sun sets. In the evening, the devotees eat gur ke kheer (sweet delicacy made by cooking rice with milk and jaggery) with Roti. This Kheer is popularly known as Rasia. 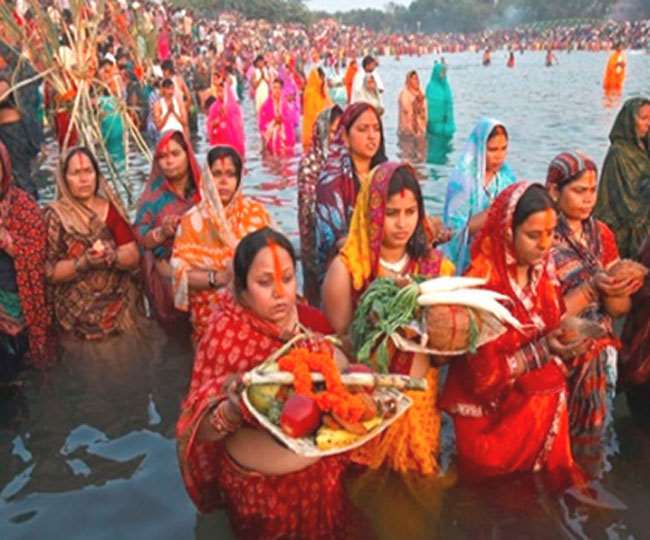 The third day of Chhath Puja is the day when the Parvaitin and other family members are busy preparing prasad (offerings to God) at home. The Prasad is usually offered in a bamboo basket which is filled with fruits, rice laddus and Thekua (sweet snack). On the eve of Sanjhka Aragh, the Parvaitin is accompanied to the River, pond or other large body of water by the family members and friends to make the Arghya (offerings to the Lord) of the prasad to the setting sun by standing in the water body. The celebrations of this day are worth witnessing as people gather in large numbers around the water bodies to witness the worshippers and the puja being performed. The onlookers even give a helping hand to the worshippers if needed in order to receive the blessings of the worshipper. While offering prasad (Arghya), the devotees offer Gangajal water to the Sun Lord by entering the water body with the prasad and Kalash full of Gangajal. Once the worship is done, the worshippers return to their houses and perform the ‘kosi bharai’ ritual along with their family members, friends and neighbouring households. 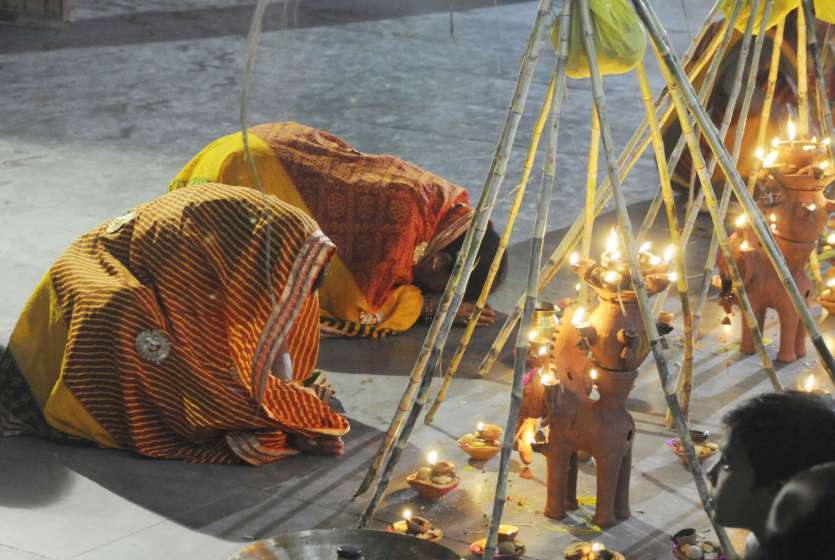 The ritual of Kosi Bharai is performed by the married couple or an individual who observes the vrat(fasting) of Chhath. According to an age-old belief, if a wish or vow of an individual who has observed the fasting for Chhath is fulfilled then he/she must perform a ritual of filling the Kosi as a celebratory repayment. The ritual of Kosi Bharai is performed on the terrace or in the courtyard of the house. Five to seven sugarcanes are tied together and a canopy (tambu/ mandap) is made. Under the canopy, the thekua (food offering made for chhath puja), fruits, fruit extracts and Keravas are placed. The canopy is then tied with a red new saree from the top. Once this is done a hollow elephant is prepared of clay(clay) and it is placed under the canopy in the centre. On top of it an earthen Pot is kept which is filled with Sathi chawal (a type of rice) kasar (sweet laddus) and dhan ka chivda(flattened wheat sweet and savoury snack). After this 12 to 24 oil or ghee diyas (ghee/oil lamps) are lit and seasonal fruits are offered. The same ritual is repeated the next morning between 3 am and 4 am, and afterward the devotees offer arghya or other offerings to the rising Sun. 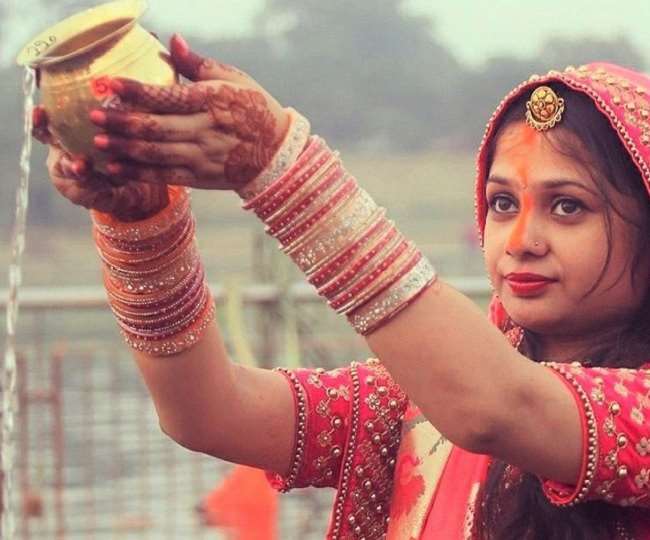 The last day of the Chhath Puja is called as the Bhorka Aragh. On this day, the devotees wake up before sunrise, freshen up and go to the river banks or any other water body that is near to their house and offer Arghya to the rising sun. While offering Arghya, the Parvaitin offers prayers to the Sun Lord and Chhatti Maiya (Ranbay Maay) asking the deities to protect the kids, create harmonious relationship with family, and to bless the family with peace and prosperity. Once, the Arghya and prayers are offered, the Parvitin sips water and consumes a morsel or two of the prasad in order to break the fast. This is known as Parana or Paran.

During the period of Chhath, in Mithila some women wear Dhoti made of pure cotton. This Dhoti is not stitched reflecting the ancient traditional Mithilanchal culture. 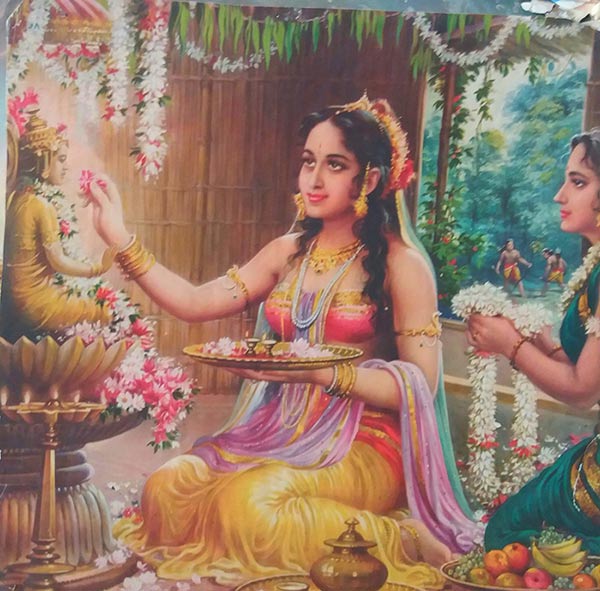 The Brahma Vaivarta Purana mentions that the Chhathi Maiya is worshipped on the Chhath festival. According to our rich history, the Sitacharan temple situated in Munger in the middle of Ganges is known for Sita Manpatthar. This is the most famous place where devotees gather to perform the puja of Chhath. According to the legend, it was at this very place in Munger where Mata Sita performed the Chhath rituals. It is said that after She (Sita Mata) performed the Chhath puja, Chhathi Maiya blessed Her with two healthy sons namely Luv and Kush. After this episode, the tradition of performing Chhath Puja or the Chhath Mohaparv came into exist. This is the reason in Munger and Begusarai, the festivities of Chhat are performed with great fervour and devotion on a large scale.

According to another legend, the First Manu Swayambhu had a son named ‘Priyavrat’. Though Priyavrat had all the riches and was a king but he did not have any children. This made him sad. Priyavrat consulted Maharishi Kashyap about this. After listening to King Priyavrat, Maharishi Kashyap told him to perform a Yajna. The rituals of the entire Yajna and puja were a little difficult but the King and His wife performed the Yajna as guided by the Rishi. A few months passed and soon Queen Malini, wife of King Priyavrat gave birth to a son but their happiness was short lived as the child was stillborn. The King and the Queen and their family members grieved. The King and his wife Malini were shattered but after some time they heard a voice in the sky and when they searched for it, they saw Mata Shashthi in the clouds. Both, the King and the Queen bowed down to Her and with a sad heart offered prayers to Her. Goddess Shashthi blessed them and said “I am Mata Chhathi, the sixth form of Goddess Parvati, I protect all the children and bless the one’s having difficulty in conceiving with a healthy offspring.”

After saying this, Chatthi Maiya blessed the dead child with Her hands and the lifeless child was revived. Looking at the child breathing, both the King and His wife were overjoyed and tears rolled down their cheeks. They offered thanks and prayers to Mata Chhathi and from that day onwards, the Chhath puja came to be celebrated with great devotion and vigour worldwide.