Dhumavati - The symbol of protection from all diseases, poverty and negative energies 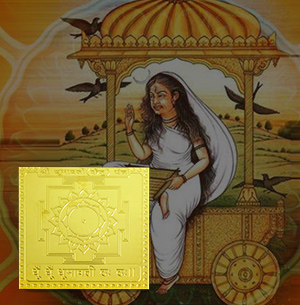 Goddess Dhumavati is one of the Tantrik Goddesses according to the ancient scriptures. Devi Dhumavati holds the seventh position among the Dus Maha Vidhyas (wisdom Goddess). She is a representation of the dark side and fearful aspect of Shakti. The upasana (worship) of Dhumavai Devi is done during the night. The place for upasana is cemetery, where Sadhaka (devotee) should perform puja bare bodied in a lonely place.

Dhumavati Devi is not a commonly known deity. Dhumavati is the smoky form of Shakti. She is also known as the eternal widow. She is also called Alakshmi, the One who is without Lakshmi or radiance. She is often depicted as ugly, having fat body, fierce eyes, wearing dirty clothes and has dry hair. A Sadhak is to perform one lakh Japa (chant) of Her mantra on the 14th day of lunar phase during Krishna Prakash (During Nights) in solitude or in the cremation ground or in the forest by observing fast and remaining silent the whole day and night.

Dhumavati is the Divine Mother at the time of the flood. Though portrayed as ugly and fearsome, the Goddess is known to bless Her worshippers abundantly with Her right hand. The black crow on Her flag represents the dark forces and black magic. She is often shown as riding a crow or a chariot without horses in a cremation ground. Also known to reveal the supreme knowledge of the universe, Goddess Dhumavati is described as the Great Teacher. Devi Dhumavati bestows Siddhis over Her worshippers.

In order get protection from evil eyes and negative energies, to overcome tragedy, sadness, depression, diseases, poverty and to eliminate the negative impact of Ketu from the birth chart, the Yantra of Goddess Dhumavati should be worshipped. Also, to get overall success and to attain spiritual upliftment, this Yantra is beneficial. You can install the Dhumavati Yantra in your house, office or even wear it as an ornament or amulet. The Dhumavati Yantra is a sacred instrument that consists of a figure or symbol characterized by simple geometric forms arranged in a symmetric design and has the power to attract the principles of Goddess Dhumavati through its mantra. This powerful Yantra resonates powers and positive energies of the smoky and fierce Goddess Dhumavati, Who blesses the worshipper with courage, confidence, mental and physical strength.

Dhumavati Yantra - An object of Meditation

This Yantra can also be used for meditating over Goddess Dhumavati. This will help in making you more focused and mentally stable. It will also aid in attaining union with the divine Goddess through geometric visualization. This Yantra is the window through which you can align with divine energy. Through resonance it connects you to the energy present in the macrocosm.

The powers of a Yantra thrive on the reverberation of cosmic energies. When you focus at the centre of a Yantra, your mind is pitched into the creative force of the Yantra through which the energy flows.It is very important to place the Yantra in the appropriate direction. Yantra energizes the location where it is installed. You may place it near the entrance of your home/office/shop or in your living room or reception or study room or office cabin. You may keep it on a table or use as a wall hanging. Yantra is best placed in the East direction facing West. It gets energised by the rising rays of the Sun and with the divine vibrations of the East corner and provides positive transformation energies to the dwelling through its mystical geometry. The vibrations of the Yantra will create an aura of positive energy around you.

Yantra are the ultimate answers for establishing a vibration of large amplitude or resonance with the benefic energies of the cosmos. Thus the vibrations generated get us in contact with highly elevated energies & entities which help us attain spiritual course of conduct in our daily lives and enhance the spirituality within.

When you look at the Dhumavati Yantra, you will notice certain symbols that are engraved or printed on it. The symbol of the lotus petals is known as the Padma (divine lotus). A lotus in Yantra represents the unconditional force of the Supreme Absolute Truth. The lotus serves as a divine seat for devas (gods). It also represents detachment. It grows in the mud but never touches even a tinge of mud, representing detachment to the external forces (material world) and maintaining the original nature which is pure and divine. The Circle known as the Chakra stands for rotation which is central to the functioning of the macrocosmic progression. At the same time, the circle signifies perfection and the peaceful creative void of the Vishudha chakra. In the series of the five fundamental elements it represents the Air Element and the Dot known as the Bindu indicates the energy and its extreme concentration at the centre. It is also called the centre of cosmic radiation. Bounded by different surfaces such as a triangle, a hexagon, a circle, the bindu represents the union with the force or creative energy ruling the Yantra.

The individual who is suffering from the malefic effects of Ketu or its Mahadasa or Antardasa is advised to perform the Maa Dhumavati puja for instant relief from the hardships, sufferingsand distress. People going through the main and sub period of Ketu (mahadasha and antardasha) or suffering from malefic of Ketu are suggested to carry out Vamtantra Dusmahavidya tantrik Maa Dhumavati puja. This puja is done to alleviate the negative effects of Ketu dosha. One can also worship the Dhumavati Yantra regularly, as it manifests the divine energies of Goddess Dhumavati.