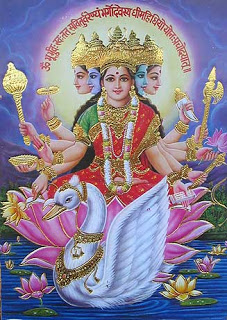 Gayatri Jayanti (22nd August 2021, Sunday) is the appearance day of Goddess Gayatri who is regarded as the mother of the Vedic literatures. She is said to be a divine manifestation of all phenomenal characteristics of the supreme Brahman.

One often identifies Gayatri with Saraswati. However she is the embodiment of Saraswati, Parvati and Lakshmi, representing knowledge, beauty and opulence respectively.

The celebration of Gayatri Jayanti takes place during Shravan Purnima in South India with some celebrating it on Shukla Paksha Ekadashi during the Jayeshtha Lunar month. It is said that Goddess Adishakti took the form of Gayatri and killed the demonic Vetrasura on this day.

On this day, the devotees and people in general sing the glories of Goddess Gayatri and recite the most powerful Gayatri mantra. Today, this festival is also observed in praise of Sanskrit, the devabhasa, the language of the gods.

Gayatri In History and Scriptures:

A bronze image of Goddess Gayatri was found in Champa region, dating back to 10th century. There are many bronze images found in Himachal Pradesh.

Known as Vedamata, She is regarded as the consort of Shiva in Shaktism and the consort of Brahma in the Skanda Purana. The Rig Veda first mentioned Gayatri as the personification of Gayatri Mantra. In the Shaivism, the devotees regard as the consort of eternally blissful Shiva (Parashiva) who takes the form of Sun known as Shivasurya who is omnipotent, omnipresent and is also known as Bharga.

Gayatri also takes a five-headed Shakti form with ten arms, as explained in the Purana, to kill the demon Vetra. She holds the sword, the lotus, the trident, the disc, the skull, Varada in the left hand and the goad, the noose, a manuscript, the jar of ambrosia and Abhaya in the right.

The Padma Purana nicely describes the story of Gayatri and Lord Brahma. Once Brahma using his Lotus (as weapon) killed the demonic Vajranabha (Vajranas) who made various attempts to kill his children and torment people especially the Brahmins. As a result, the lotus petals fell on the ground at three places. And at these places, three lakes formed: the Pushkar Lake (Jyeshta Pushkar), Madya Pushkar (middle Pushkar) Lake, and Kanishta Pushkar (lowest or youngest Pushkar) lake.

After descending onto Earth, Brahma made up his mind to perform a Yajna (Fire sacrifice) at the main Pushkar Lake. But before the Sacrifice, he ensured no demons attack it by creating the hills (giri) around the Lake; Ratnagiti in the south, Nilgiri in the north, Sanchura in the west and Suryagiti in the east. He realized he needed his wife Savitri to join him in the Sacrifice. However, she could not be there because she was awaiting Lakshmi, Parvati and Indrani.

Without wasting time, Brahma asked Indra to get him a suitable woman for marriage so that both of them can finish the Yajna. Indra fulfilled his wish as he found a milkmaid’s daughter who was purified by the touch of a cow. Lord Vishnu and Lord Shiva considered her to be the most suitable as she was reborn after being sanctified by the cow as Gayatri.

Soon Lord Brahma married her and completed the Yajna. During the performance of Yajna, she carried a pot of amrita (nectar) on her head and offered oblations.

She is the essence of all Vedas that aim to elevate the fallen souls to the highest consciousness i.e. self-realization. Goddess Gayatri’s glory is sung by all the gods and goddesses. She is mentioned in all the Vedic mantras and seed mantras of different deities. She is purity personified, and from the purest come the four Vedas who also purify the materially attached beings. It is She who sustains the cosmos as residing in the energies of Brahma, Vishnu and Mahesh.

There are twenty four forms of Goddess Gayatri, each of whom is assicated with each syllabus of the Gayatri Mantra:
Adi shakti: Associated with the production, development and transformation of material manifestations or cosmos.

Brahmi or Brahmani: Associated with the force that enables Brahma to produce the cosmos in different varieties.

Vaishnavi: Associated with the energy of Lord Vishnu, Lakshmi and Sato Guna (mode of goodness)

Shambhavi aka Maheshwari Matrika: Associated with the energy of Lord Shiva in destroying and correcting the wrong or demonic.

Vedamata: Associated with all the Vedas (Rig, Sama, Yajur and Atharva) as their mother.

Devamata: Associated with the godly qualities such as bring charitable, compassionate, devotional and the like.

Vishvamata: Associated with the world as its mother.

Mandakini aka Ganga: Associated with the divinity of River Ganga.

Ajapa: Associated with the highest state a devotee attains with the Lord.

Riddhi and Siddhi: Associated with spiritual attainment and material opulence.

Rtambhara: Associated with self-realisation or liberation from the pangs of material nature.

Savitri: Associated with the spiritual energy that sustains the matter.

Lakshmi: Associated with auspiciousness and opulence

Durga/Kali: Associated with kala, the Time.

Saraswati: Associated with the knowledge, the intellect and the sense of understanding

Kundalini: Associated with the yogic power or kundalini for self-realization.

Mahamaya: Associated with the delusion the weaker humans are put into.

Payasvini: Associated with the elixir of immortality (self-realisation) and milk of a cow (purity personified).

Pranagni: Associated with the Fire element in the body. t

Treyta or Tripura: Associated with the dominance over the three spheres of existence sat-chit-ananda (eternity, knowledge and bliss).

Bhavani: Associated with the power that protects the surrendered, the weak and the unarmed.

Bhuvaneswari: Associated with the person’s prosperity and bliss.

What to do on Gayatri Jayanti? How To Celebrate Gayati Jayanti?

On this day, people get up early in the morning and offer prayers to Goddess Gayatri.
There are special pujas in temples conducted by Pandits.
The best part is that people, young or old, take part in Satsangs and Kirtans, singing the glories of Gayatri Devi.
The most important part is the recitation of Gayatri Mantra which supersedes other Vedic mantras.
If you are celebrating Gayatri Jayanti, make sure you chant mantra 108 times thrice a day in the morning, afternoon and evening.

We meditate on the glory of the Creator; Who has created the Universe;

Who is worthy of Worship; Who is the embodiment of Knowledge and Light;

Who is the remover of all Sin and Ignorance; May He enlighten our Intellect.

Read more about the mantra and its detailed meaning here

This is one of the most auspicious activity one can ever perform on Gayatri Jayanti. Performing Gayatri Puja, Mantra Japa and Yajna is best for intelligence, wisdom and righteous living among members, materialistic comforts and spiritual upliftment for the family, self-confidence, self-worth and self-advancement of individual members. This Yajna includes invocation of major Gods and Goddesses in Kalash, recitation of Maa Gayatri Kavach and Stotram, Gayatri Yantra Pujan, path of Gayatri Chalisa, Gayatri Mantra Japa, Gayatri Yagna, Aarti and Pushpaanjali.

Book your Gayatri Pooja to be performed on Gayatri Jayanti here