Hinduism is renowned for the Holy trinity – Lord Brahma (Creator), Lord Vishnu (Preserver), and Lord Shiva (Destroyer). Their consorts are Goddess Saraswati, Goddess Lakshmi, and Goddess Parvati respectively. These gods and goddesses are known for their various avatars, incarnations, manifestations and forms which they assume for helping restore balance in the universe.

Goddess Lakshmi is believed to be the divinity of wealth, luxury, fortune and power. She is the consort of Lord Vishnu, one of the main deities of Hinduism. One of the incarnations of Lakshmi Devi is Goddess Padmavati.

Who is Goddess Padmavati Devi 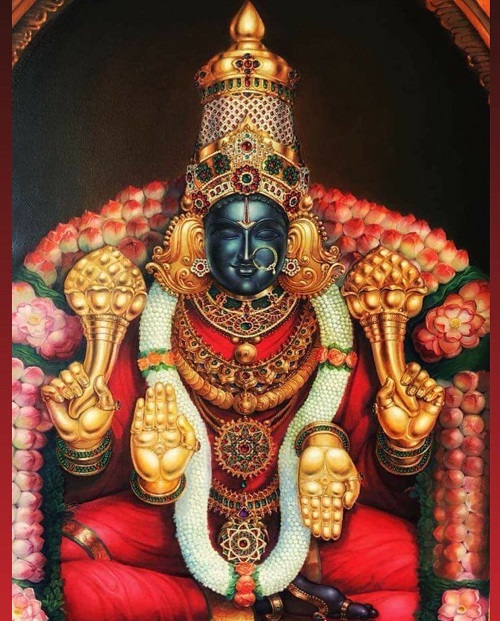 While Lord Shrinivasa is revered in a big temple at the summit of the Tirumala hills, in Tirupati, the Padmavathi Ammavari Temple, devoted exclusively to Goddess Padmavati is located in Tiruchanur, close to Tirupahi. It is a tradition that every devotee heading to Tirupati needs to pay homage at this holy shrine prior to visiting the Tirumala Venkateswara Temple, the main temple of his consort. Her temple is deemed to be held in high regard and is an extremely respected and venerated sacred site in South India. It draws thousands of devout worshippers every day.

Goddess Padmavati was the daughter of a local king but received the status and respect of a premier Hindu deity. According to a legend, Goddess Lakshmi was not able to stand the belittling of her husband Lord Vishnu by Sage Bhrigu. So, she decided to leave Vaikunta. She took birth on Earth to Akash Raja, a Tondainmandalam King, as Padmavati.

In Sanskrit, Padmavati suggests ‘she who arose from lotus.’ She is also called Alamelumanga in Telugu and Alarmelmangai in Tamil. Mangai implies a ‘young lady.’ Therefore, the name ‘Alarmelmangai’ is translated as ‘lady seated on a lotus.’

According to the Venkatachala Mahatyam, Goddess Alamelu Mangai (Padmavati) is believed to be an unlimited source of kindness and love. Mother Goddess manifested in the Pushkarini, known as Padmasarovaram, in a golden lotus. It had not bloomed yet. The Mahatyam mentions that Lord Suryanarayana played a role in blossoming the lotus to its full glory and magnificence. Therefore, a temple devoted to Lord Suryanarayana is observed on the eastern side of the Pushkarini.

The Padma Purana offers an elaborate and detailed description of the beginnings of Goddess Padmavati and her subsequent wedding with Lord Venkateswara. The manifestation of Padmavati Devi happened in the Karthika month on Shukla Paksha Panchami when the star Uttarashada was in the ascendant. The Brahmotsavam of the deity is rejoiced with grand pomp and fervor to observe this auspicious occasion. 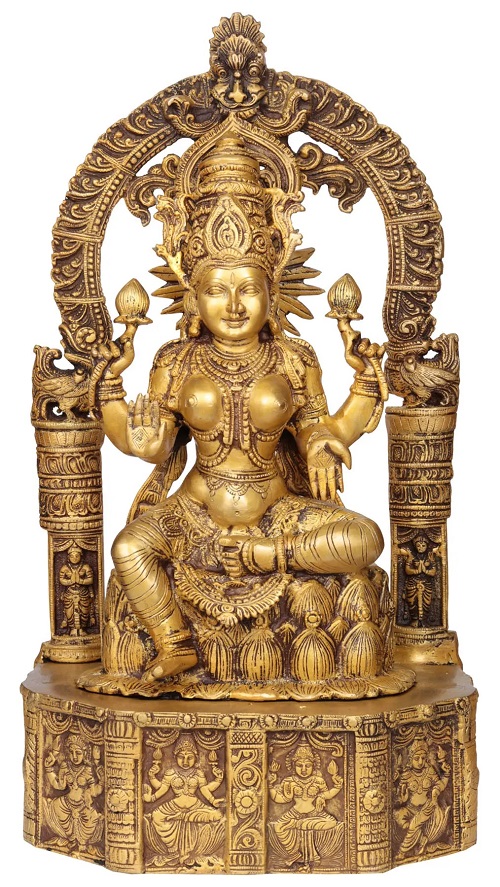 Goddess Padmavati is a popular form of Lakshmi Devi that is venerated in Southern India. The four-armed tall Goddess is deemed to be the enshrining chief deity of numerous temples in the Southern part of the nation. Goddess Padmavati is as popular as Vishnu himself and is worshipped independently unlike Lakshmi-Narayana imagery who are generally portrayed together. Goddess Padmavati has a solo standing idol and a shimmering majestic crown that bears resemblance to Lord Vishnu’s standing image and magnificent crown. She is portrayed carrying Vaijayanti and holding lotuses in her hands.

Goddess Padmavati is portrayed as an exceptionally gorgeous maiden with four hands. She is shown carrying lotuses in her upper hands and has the lower right in ‘abhaya’ and lower left in ‘varada’ pose. The iconography of Goddess Padmavati is different from the imagery of Goddess Lakshmi. In specific imagery, Padmavati Devi is showcased in a dancing pose, remarkably distinct from how Goddess Lakshmi is depicted.

The plethora of lotus motifs is yet another significant aspect of Goddess Padmavati’s iconography. A lotus is believed to be a symbol of divinity and the Devi is sometimes demonstrated holding two large-size lotuses that are half-bloomed in both upper hands. The towering and majestic Vaishnava crown with a helmet-type apex is characteristic of a typical South Indian iconography. The Goddess is adorned with rich, shimmering, and beautiful ornaments – frilled waistband, sparkling necklaces, ear-ornaments and arm bands. The Goddess is portrayed with sharp features such as a round face, lotus face, arched eyebrows, pointed nose, well-defined chin, full lips and rounded cheeks. Her figure is balanced with perfect anatomical proportions, especially her waist and hips. 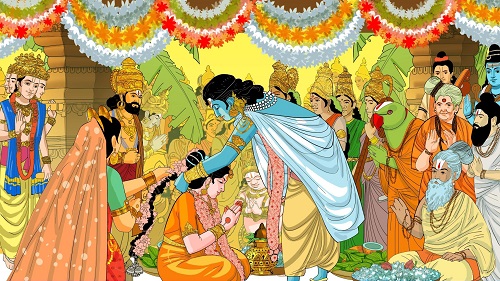 As per Hindu folklore, some stories cite that when Sage Bhirgu visited the three worlds to seek the supreme God, he became livid when Lord Brahma and Lord Shiva were oblivious to him. He eventually reached Vaikuntha to meet Lord Vishnu. The deity was smiling and meditating in a reclined pose with his consort Goddess Lakshmi attending to him out of love.

Ignored once again, an enraged sage Bhrigu kicked Lord Vishnu’s chest (the residence of Goddess Lakshmi) and made his spouse extremely upset. A calm and composed Vishnu requested the sage to forgive him and attended to Bhrigu by pressing his feet. He went on to obliterate the eye in Bhrigu’s leg, the source of the rishi’s ego.

This act by Lord Vishnu deeply disappointed his wife, Lakshmi. So, she decided to leave Vaikunta and reside in Kolhapur at the Sri Mahalaxmi Ambabai Temple. Meanwhile, Lord Vishnu was not able to tolerate the separation from his wife and reached the Venkatadri hills in the Tirupati area as Shrinivasa and began performing penance there.

Meanwhile, Akasha Raja was a childless king of the region close to Tirupathi hills. He conducted a ceremony for begetting a child. A shimmering golden-colored lotus in full bloom materialized out of the earth which held a baby girl. The ruler was extremely thrilled and joyful with his divine gift. The king named the lotus-born baby girl Padmavati. She was Goddess Lakshmi who had incarnated herself and was born to a local king. As time went on, the girl grew into an exceptionally beautiful damsel and her parents began seeking an ideal groom for her to marry.

However, princess Padmavati, who visited the hilly jungles one day, chanced upon Shrinivasa. At that time, Padmavati was attacked by a fierce elephant and Shrinivasa saved her life. Since the divine and celestial couple only had a short separation, they immediately fell in love with each other deeply.

Even though Akasha Raja was initially against his daughter marrying an unknown forest-dweller, the ruler later conceded owing to the powerful divine will. For the wedding, Shrinivasa asked for a loan from Lord Kubera and promised to repay him by the end of Kaliyuga. Thus, Lord Shrinivasa and Goddess Padmavati were ultimately united in a holy marital bond with a majestic wedding ceremony that was celebrated with grand pomp and fervor with all the Gods and other celestial beings in attendance.

Lord Shrinivasa took residence atop the seven hills, renowned as Tirumala hills as Lord Venkateswara and assumed the form of a Vigraha (stone statue) while his consort Goddess Padmavati started living in her temple in a close-by area, known as Alamelumanga Puram (Tiruchanur), called after her name, Alamelu Mangai.

‘Padma’ translates to lotus flowers and ‘Vathi’ suggests resemblance. Therefore, Padmavati stands for the one who looks similar to the lotus in her appearance and beauty. Lakshmi Devi is regarded as the Goddess of Wealth and Fortune and is also renowned as ‘Shri’, the symbol of auspiciousness and success. Goddess Padmavati, as Lakshmi’s incarnation, had assumed her chief residence, the very heart of the Lord himself. This is why the deity has taken the name Shrinivasa – Shri Nivasa – i.e., the Nivasa – the abode of Shri, Goddess Padmavati.

The mount or vehicle of Goddess Padmavati is considered to be an elephant. A flag bearing the image of an elephant is hoisted in the Padmavati temple. 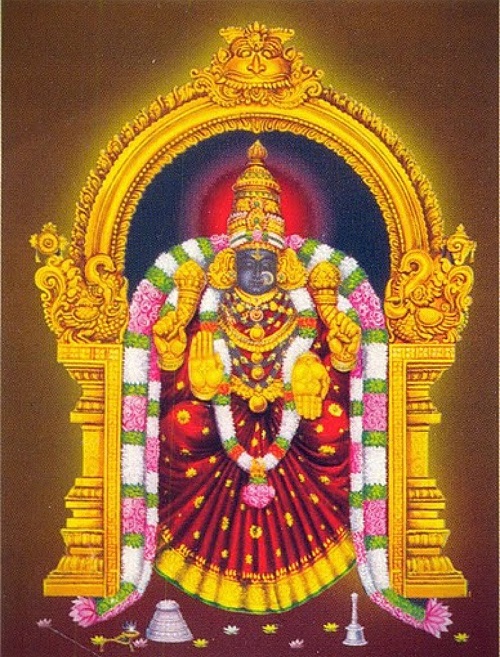 Goddess Padmavati is typically showcased sitting majestically as she carries lotuses in her upper two hands, while her lower hands are in the protective Abhaya mudra and the boon-offering Varada mudra poses. 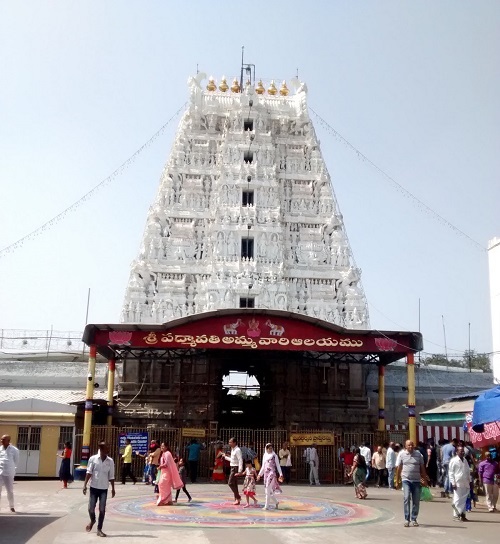 Padmavati Temple is a shrine devoted to Goddess Padmavati or Alamelu Mangai, the consort of Lord Venkateswara. The temple was built in the time of Tondaman Chakravarthi, who is believed to be the elder brother of Goddess Padmavati.

The sacred site is located in Tiruchanur, located at a distance of 5 km from Tirupati in the Chittoor district of Andhra Pradesh, India. Goddess Padmavati (or Alamelumanga) is deemed to be the chief deity of the temple. The Goddess is positioned facing towards the east.

Apart from Goddess Padmavati who is considered to be the presiding deity of the temple, you will find idols of Lord Krishna, Lord Balram, Sundararaja Swamy and Suryanarayana Swamy. A flag hoisted from the temple showcases the image of an elephant, believed to be the vahana (mount or vehicle) of Goddess Padmavati.

Many pilgrims have this belief that they need to pay homage to Goddess Padmavati in this temple and seek her divine blessings prior to commencing on their journey to visit Lord Venkateswara at Tirumala during their pilgrimage.

As per one of the legends, Goddess Lakshmi was born as Padmavati to Akasha Raja, the king of the area, and married Lord Venkateswara of Tirupati. As per tradition, the Mother Goddess manifested herself in the sacred Pushkarini, referred to as Padma Sarovaram, in a golden-colored lotus.

Padma Sarovaram is considered to be the temple tank of the Padmavati temple. It is said that Goddess Padmavati materialized in this tank in a golden-colored lotus flower (padmam) on Shukla Paksha Panchami day in the Karthika month.

Conducting this Homam aids you in gaining relief from all sorts of difficulties and obstacles life throws at you. It aids you in achieving all your goals. Worshipping Goddess Indrani can help you achieve an abundance of wealth and success. You can get rid of the malefic effects of doshas and overall negativity.

The Brahmotsavam of Goddess Padmavati is commemorated with grand pomp and fervor to honor this auspicious occasion. This magnificent festival is observed for 10 days and draws millions of devout pilgrims from all over the world.

The yearly festival of Brahmotsavam is honored with a lot of sincerity and vigor in the month of Karthigai (November-December) when the processional deity of Goddess Padmavati is carried around the temple in various mounts amidst the chants and prayers of thousands of worshippers.

The Brahmotsavam at Tiruchanur is a magnificent occasion that is celebrated by millions of worshippers. It is also an event for all devotees to receive her divine blessings in abundance.

In the upcoming year, the Brahmotsavam will be held from November 20th to November 28th, 2022.