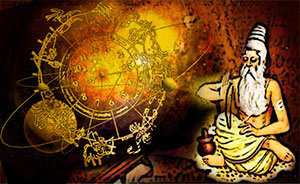 History:
Nadi is an ancient astrology that was composed by a great Maharishi (sage) called Agathiyar using his spiritual powers. The sage recorded these predictions for every individual for the betterment of humanity and to safeguard dharma (righteousness).

He predicted the characteristics, family history, as well as the careers of innumerable individuals contain in several thousand volumes, each containing around a hundred predictions. These Nadi prediction recordings, being the repository of wisdom of the Great Saint was one of the well preserved books for thousands of years by the many generations of rulers, until an auction during the British rule, when it finally became the proud possession of an influential family of Valluvar community at Vaitheeswarankoil in the Tanjore district of Tamilnadu.

The sage, who dictated those Nadis, was gifted with such a remarkable foresight that he accurately predicted the entire future of all mankind. Many scholars in diverse parts of India have in their safekeeping several granthas. Initially, Nadi Astrology predictions were thought to be just writing on Astrology, but soon it became evident that the scriptures contained some unique predictions of specific natives, who will come seeking them, at a particular stage of their lifetime, as foretold by the Great Saint in these predictions.

The source point of Nadi Astrology leaves can be traced back to approximately more than two thousand years. It is said that the Seven Maharishis (sages) Agasthya, Kausika, Vyasa, Bohar, Brigu, Vasishtha and Valmiki had predicted life of each individual on leaves of a palm tree by their spiritual powers. These Nadi leaves were originally stored in the place of Tanjore Saraswati Mahal of Tamilnadu State in India. The British authority later wished to know more about them.

Nadi leaves while used for herbal and medicinal purposes were used for future prediction. But in due course of time they were destroyed and some of them were auctioned when the country was under British rule. Some Nadi leaves were anyhow prized by the families of astrologers in Vaitheeswarankoil from Tanjore Saraswati Mahal Library. Arounf 13th century these leaves were retrieved by their forefathers who realized their tremendous value and created the copies of the predictions on the palm leafs and created them their exact duplicates. The prediction written on the leaf is in ancient Tamil in form of poems, same as language used in ancient temple of Tamilnadu.

In his book on page 81 to 85 Mr. Thomas Ritter describes his experiences of many Nadi centers he visited in India and the result of Carbon 14 test conducted in the famous "Institute for Ion Radiation of Physics Department 'placed in Nuclear Research Centre, Rossendorph, Saxen, Germany. This institute has been responsible to decide the age of ancient paintings and other documents of national importance in Germany, Thomas Ritter contacted expert C 14 scientists Prof. Fradrik and Dr. Hanse of the institute. He also confirmed from the experts on Tamil language in Germany that the matter is in fact Tamil language script. It is about predictions and not some religious matter.

On preliminary checking the scientists said that the matter written on the leaf has been etched out and some graphite like substance has been used so that the matter could be seen more clearly. Clearing the black substance from the leaf took some months. By then Thomas Ritter became increasingly anxious about the result. Sometime in March 1995, he got the much awaited result, which clearly indicated that the age of that particular leaf was at least 350 years. Considering the deviation factor allowance generally given for this type of tests the report said the age could be between 350 to 400 years.

Procedure of Nadi Astrology:
Nadi Astrology is a supernatural prediction based on an individual's thumb impression.

On obtaining the aspirant thumb impression, it is handed over by the Nadi reader, as it the scientific fact the whirls and loops of every individual is unique and it is next to impossible to be replicated. The thumb lines are classified into 108 types. The writings in palm leaf bundles are indexed & classified in the library according to thumb impressions to facilitate easy searching of the bundles. For each thumb impression there are likely to be around 5 to 6 bundles; each such bundle in turn containing 50 to 100 leaves. One particular leaf might be that of the individual, but the process of finding out that specific leaf is laborious and time consuming.

For the predictions to come true, Rishi Agasthiya insists that the individual be free of any previous birth sins. He therefore suggests and specifies the performance of certain Parihars remedial procedures to wipe off the maximum extent any such balance of sins. If these remedies are performed with full involvement and without any deviation, he assures the happening of the events predicted by him. These remedial procedures are to be found in separate chapters called Shanthi & Deekasha.