Quite often referred as the Cordierite, Iolite is primarily a violet colored gemstone with dual tone. It’s the distinctive quality of pleochroism that gives it different colors while viewing from different angles. Due to this amazing property, it is difficult for the artisans to cut this stone and create facets. It is a tricky job to form a faceted Iolite gemstone as the color may change in the process. Iolite is a semi-precious stone with a hardness of 7-7.5 on Mohs scale of mineral hardness. It is usually confused with Tanzanite but its properties are very diverse. People often consider it as an auspicious gemstone to be gifted on twenty-first marriage anniversary. It gives immense confidence and strengthens the wearer to undertake tasks and responsibilities. The transparent form of this stone is used in jewels and those which are not clear are used in the ceramic industry. During ancient time Iolite was also worn for its healing qualities, it was believed that it enhances vision when worn along with Pearl, it instills the leadership qualities in a woman if worn with petrified wood and treats Malaria if combined with Larimar stone. 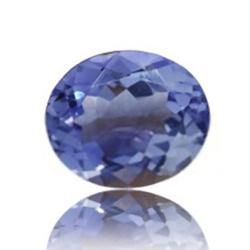 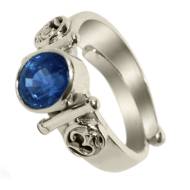 Iolite Healing and Other Properties 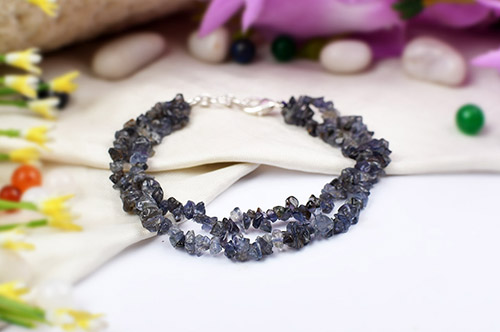 The double turn patterned Iolite bracelet is a beautiful accessory for wearing every day and imbibing its healing benefits. Uncut natural iolite stones of small size are used in making this stylish bracelet. It brings an authentic vibe to the attire and suits all types of outfits. The Iolite double turn bracelet can be highly effective in bringing harmony in relationships, boosting immunity, treating nerve related disorders and attaining emotional stability. Its violet blue hue looks mesmerizing as the bracelet shows shifting shades. 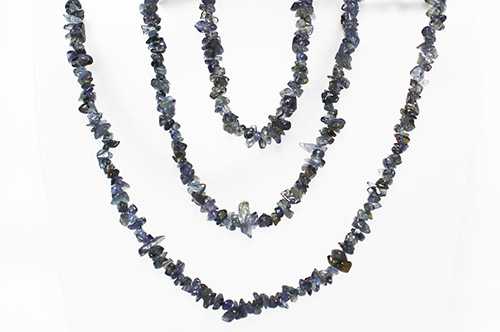 Gorgeous uncut Iolite stones of various shapes are strung together to make an Iolite Mala for healing. The Mala necklace is designed in the most simplistic manner such that it matches every kind of look. It is a highly energized jewel that helps the wearer to detoxify the body and get clarity of thoughts. Wearing this Mala can activate the path of exploring inner self and growing spiritually. It can also be used for meditating, getting rid of migraine and developing attention. 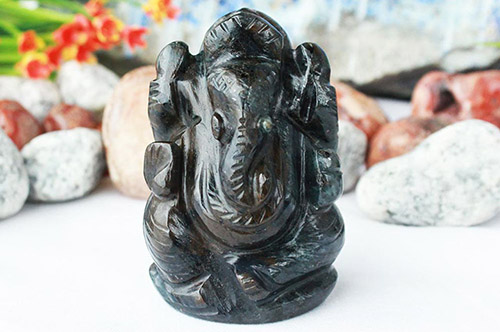 Lord Ganesha carved in the two-toned beautiful Iolite stone is perfect for keeping in your home or at the entrance. It carries the combined energies of Lord Ganesha and Iolite gemstone. The idol is depicted in a seated posture with right hand of the God in Abhaya mudra. Placing this idol removes obstacles from the path and creates a positive aura in the space. Iolite is closely associated with creativity so it is a good gifting option for your artist friends or family members. 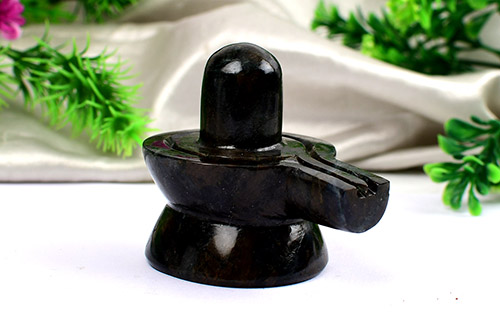 Shivlingam is the physical representation of Lord Shiva, the Supreme Lord. Carved in exquisite Iolite stone, the Shivalinga looks ethereal and holds tremendous energies that are highly elevated. The gemstone Shivalinga when placed in home brings abundance with happiness and peace. It needs to be taken care of properly and worshipping on a regular basis pleases Lord Shiva. Keeping this beautiful Shivalinga made out of natural Iolite stone is auspicious and it can also be given as a gift to Shiva devotees.

Iolite History, Usage and Other Details 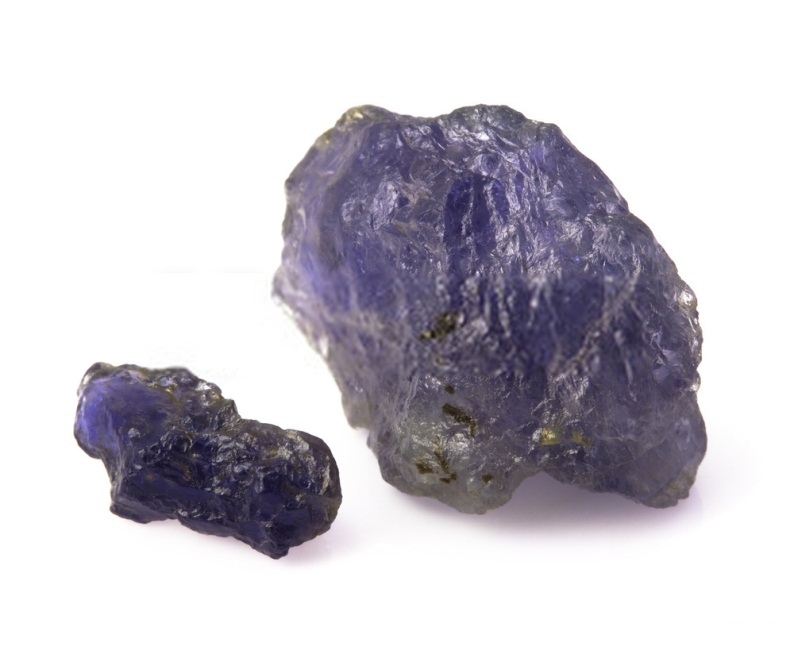 Iolite is violet in color and it gets its name from the Greek word “ios” which means “violet”. It was believed that the Vikings used slices of this beautiful stone to reduce the glare and locate the sun while they were traveling. It comes from the Cordierite family and displays pleochroism which is a rare quality in gemstones. This semi-precious stone radiates different colors from different angles with polarized light and this property is known as “pleochroism”. The unique property has also given it names such as Water Sapphire, Dichorite, etc. When you look at the stone from one side, it looks blue like a Sapphire and it looks clear just as water when you look from the other side which gives it the name “Water Sapphire”. Dichorite means a stone with two colors which also comes from its pleochroic nature. Sometimes people even use Iolite as a substitute for Sapphire and Tanzanite.

Q: Where is Iolite found?
Ans: Major Iolite deposits are found in parts of Brazil, India, Sri Lanka, Australia, Burma, Tanzania and recently it was also found in regions of Madagascar.

Q: What is Iolite called in Hindi?
Ans: Iolite is known as “Neeli” and “Kakaneeli” in Hindi because of its violet-blue color.

Q: What is the color of Iolite gemstone?
Ans: The shades of Iolite vary from blue, indigo, lavender to violet and deep blue. Due its pleochroic quality, it displays different colors when viewed from different angles.

Q: Is Iolite a rare semi-precious stone?
Ans: The finest Iolite stones are above five carats and they are very rarely available.

Q: How to identify a real Iolite?
Ans: There can be fake Iolite stones in the market and a simple way to differentiate the real Iolite from a fake one is to do a Scratch Test. Fake glass is soft as compared to Iolite and it can be scratched very quickly while Iolite has a hardness of 7-7.5 on Mohs hardness scale so it will not have scratch marks that easily.

Q: How to use Iolite?
Ans: Iolite can be used as jewelry and it can be worn in a ring, bracelet or necklace too. It can also be used as a stone for meditation as it emits the calming energies that our mind needs.

There are a number of different factors that determine the price of Iolite stone like carat, cut, clarity and shape. Iolite deposits are very less and thus, the supply of the stone is also quite irregular. Its price remains very constant and does not fluctuate much. It is widely used as an inexpensive substitute of Blue Sapphire and Tanzanite. The origin of the gemstone also affects the price and it is always recommended to check the authenticity of the stone. Treating the gemstones degrades their quality so natural gemstones should be worn to get the best results and experience excellent changes.