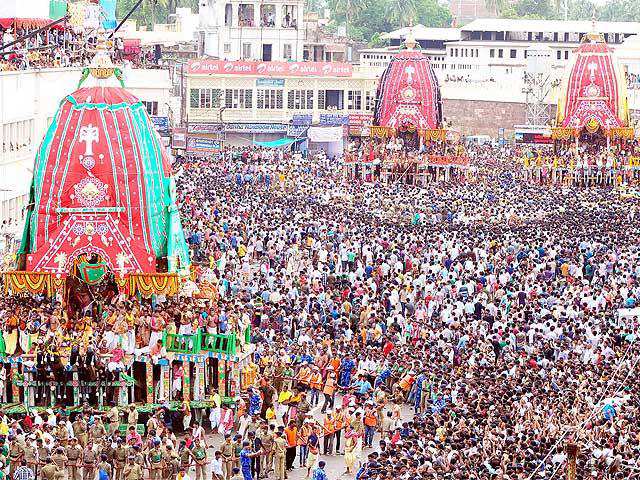 Jagannath Rath Yatra festival is falling on 23rd June, 2020 Tuesday with the Bahuda Jatra aka Ulta Ratha (Return Car) on July 1, 2020 Wednesday. It is one of the largest and the most-celebrated festivals of India that happens at the renowned Jagannatha Temple in Puri, Odisha where millions of devotees arrive to take darshan of Lord Jagannatha.

The festival date is determined in line with the Hindu Lunar Calendar. It generally falls on Dwitiya Tithi during Shukla Paksha of Ashada month (June-July).

Why is Ratha Yatra celebrated on a massive scale?

Lord Jagannatha, an incarnation of Lord Vishnu, is revered by the Vaishnavas (followers of Vaishnava sect). The word Jagannatha means Lord (Natha) of the Universe (Jaga). He is worshipped along with His brother Balabhadra and His sister Devi Subhadra. The reason why Jagannatha temple is visited by millions of devotees is that it is located in Puri which one of the four Hindu pilgrimages called as Chara Dhama. It is said followers of Hinduism must visit these four pilgrimages once in a lifetime so that all their sings get washed off and they attain ‘mukti’ liberation from the pangs of the material world.

The Lord’s nature is such that He has unlimited qualities confirmed by all the Vedic scriptures as well as scriptures of other religions as well. In the Bhagavad Gita (7:6), the Lord Himself shares the secret about His transcendental nature: Of all that is material and all that is spiritual in this world, know for certain that I am both its origin and dissolution. All the energies of the Lord are nirguna, that which is beyond the gunas (modes) of material nature; spiritual. Everything visible is His quality, His energy. Therefore material manifestations such as earth, stone and wood all emanate from Him. The Gita describes these manifestations as the Lord’s external or inferior energy. However when the materials such as stone, wood are combined to create Pratima or Murtis (idols) the Supreme Lord, they become divine being no longer of the inferior nature. The Lord Jagganath’s idols used in the Rath (Cart) Festival are all divine. 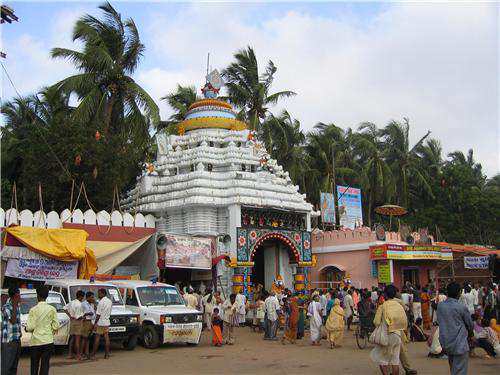 The core nature of the Lord is mysterious. Though it is difficult to attain Him but the scriptures, which are His manifestations, mention that if a devotee takes two steps toward the Lord, the Lord takes four steps toward the devotee. Lord Jagannath is merciful, liberal and accessible to anyone who wishes to develop love for Him.

Once upon a time King Subal, a great devotee of the Lord, asked a sculptor to carve a form of Lord Krishna honoring the Lord’s appearance on His divine chariot at Kurukshetra when the Lord was joined with His Brother Valaram and Sister Subadra. The sculptor agreed to fulfill the King’s wish but on a condition that he be allowed to work in his room alone, with no distractions or disturbances. The King consented.

As the time lapsed, the King went on becoming impatient for he was too eager to see the Deity of the Lord. He wanted to offer obeisance to Him for He is the Lord of the universes (Jagannatha). When he reached to the point of being absolutely impatient, he opened the room wherein the sculptor had been carving the deities only to see the idols and a cloud of smoke. The sculptor had in a flash disappeared leaving the King astonished. However, the Deity Forms of Jagannath, Valaram and Subadra were so captivating that he almost forgot that there was a sculptor here. The deities made by that sculptor are what we see at Puri during the Rath Yatra festival.


Rath Yatra Rituals: What happens during the Yatra (procession)?

The Rath Yatra mainly centers on Lord Jagannatha's yearly visit to Gundicha Mata temple. Many believe that Lord Jagannatha, Balabhadra and Subhadra spend a few days at the Puri Jagannatha temple that was built by the fabled King Indradyumna’s wife Queen Gundicha who offered un-paralleled and matchless devotion to the Lord. About eighteen days before of Rath Yatra, Lord Jagannatha, his brother Balabhadra and his sister Devi Subhadra are offered ceremonial Vedic bath known as Snana Yatra observed on Purnima Tithi in Jyeshtha month. Devotees engage in cleaning the Gundicha temple a day before the Rath Yatra. It is a ceremonious cleaning of the temple called Gundicha Marjana.

The deities of Jagannath, Balabhadra and Subhadra are carried out in a procession by the devotees to Gundicha temple, located 2 km away from the main temple of the Lord, where they spend nine days. Later, the deities are brought back to the main temple. This return procession is called as ‘Bahuda Jatra’. 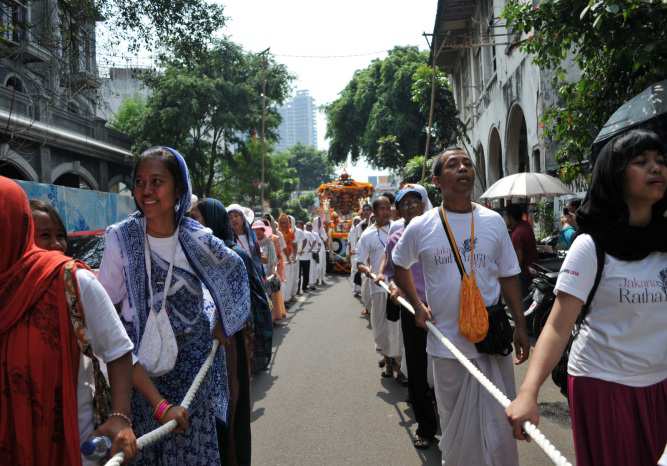 Pulling the Rath (Chariot) of the Lord:

Devotees have an intense desire to help pull the deities’ chariots. They believe that by pulling the chariots, one engages in pure devotion to the Lord who destroys their sins committed knowingly or unknowingly. Lord Jagannatha's chariot is known as Nandighosa being forty-five feet high and forty-five feet square at the wheel level. With the sixteen wheels, the chariot is ornamented with a cover made of red and yellow cloth. The chariot of Lord Balarama is known as Taladhwaja forty-four feet high with fourteen wheels and the Palm Tree on its flag. And the chariot of Subhadra is regarded as Dwarpadalana, forty-three feet high with twelve wheels, ornamented with a covering of red and black cloth.

Prayers and Japa during the Festival:

Since Lord Jagannath is a divine form of Lord Vishnu, one should offer prayers to the Lord by being a part of the Yatra. As a devotee, you can help pull the chariots. If visiting the Ratha Yatra is not possible, one can simply chant on the Tulasi beads at home in the early morning and remember the Lord in the mind. Also, you can wear a Nineteen Mukhi Rudraksha bead which is ruled Lord Narayana (Vishnu) along with Seven Mukhi Rudraksha bead ruled by Goddess Lakshmi, wife of Lord Jagannatha who visits Gundicha temple in search of Lord Jagannatha after four days of the Yatra. You can also wear a Ten Mukhi Rudraksha bead as this Rudraksha bead is ruled by Lord Krishna (Vishnu). Remembering the Lord with these Rudraksha malas is as auspicious as praying to the Lord in temples. However one should be a part of the Ratha Yatra and seek blessings of the Lord by helping pull the carts.