Ketu: The symbol of spiritual upliftment and wisdom and prosperity

Every planet has a visual and physical existence but Planet Ketu does not have any physical shape. Irrespective of this fact, Ketu is known to be one of the most powerful celestial bodies that have been considered as a planet by our Rishis and seers. According to Vedic astrology Rahu and Ketu are believed to have an orbital cycle of 18 years and are known to be 180 degrees away from each as per orbit and also in the birth charts. Ketu is believed to be the South Node which is also known as the descending node of Moon as per Vedic Astrology. Ketu takes 18 years to travel through the zodiac and it stays in one sign for around 1.5 years. 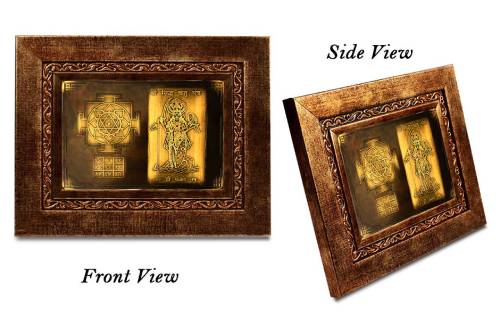 This Ketu Yantra is made of Copper with an antique finish. The Yantra diagram is etched on one side of the Copper sheet and the Deity image on the other. The Planet Ketu if placed unfavourably in a native's Birth chart can cause multiple problems and make life difficult. This Yantra when installed at home and worshipped protects from the ill-effects of malefic Ketu. Struggles dissolve making way for wealth, material fulfilment, good health and supports to grow spiritually.

This powerful Locket is made in pure Silver, has Yantra neatly inscribed on one side and Deity photo on the other side. The Ketu Yantra Locket is apt for those who have a weakly placed Planet Ketu in their Horoscope, as it creates challenges which are difficult to overcome. When worn, the Yantra Locket works to eliminate negative energies and malefic effects of Ketu. It heals physical ailments, bestows prosperity, wealth, protects from hidden enemies, brings spiritual advancement and well being. 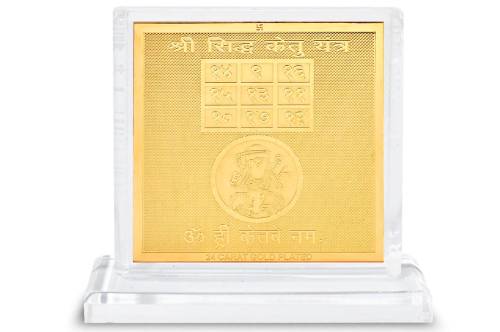 This pocket size Ketu Yantra is made of Copper with Gold finish and has the Yantra geometry and Deity image engraved on it. The Yantra is ideal to carry in a purse, wallet, pocket and can be kept in a cash box, desk etc. When Planet Ketu is unfavourably placed in a native's Birth chart, it results in upheavals in life. This pocket size Ketu Yantra removes malefic effects of Ketu and brings back good health, prosperity, brings spiritual understanding and peace. 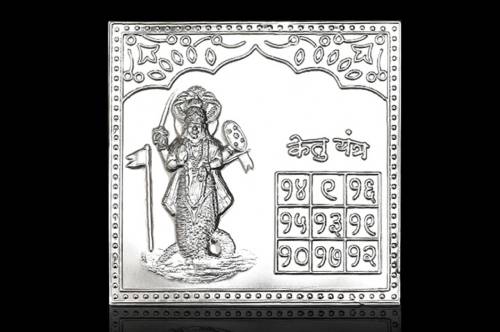 This Ketu Yantra in Pure Silver is an imprint of Ketu Yantra on a silver plate. The floral design beautifies the Yantra with a simple dotted border to enhance the overall appearance. It pacifies the malefic effect of planet Ketu as it has the blessings of the planet. It can be placed at the entrance of your home, office or shop to experience the beneficial powers of Ketu. It protects the residents of the house and gives longevity. It also uplifts the user spiritually and attracts wealth.

According to ancient scriptures, before the churning of Ksheer Sagar (ocean of milk), the Gods and demons agreed on equally sharing the divine nectar that would come out of the ocean. This nectar had the power to grant immortality to the one who would consume it. Hence, when the time of distribution came, to pacify the dispute between Gods and Demons, Lord Vishnu disguised as a beautiful lady named ‘Mohini’ and started distributing the nectar among them. But, demon Rahu recognised that the beautiful lady was none other than Lord Vishnu Himself and noticed that He was not being fair while distributing the nectar. Rahu saw that Lord Vishnu served more quantity of this divine nectar to the Gods in comparison to the demons. Hence, Rahu disguised himself as a God and sat between Sun God and Moon God in order to have more portion of the nectar. The Sun God and the Moon God recognized demon Rahu and complained of the demon to Lord Vishnu. The head of Rahu was cut off by Lord Vishnu by His Sudarshana Chakra but the demon survived as he had already consumed enough nectar that made him immortal. Since then, the head of the demon came to be known as Rahu while, the remaining corpse of the demon was known as Ketu.

Ketu, also known as the shadow planet is the headless body of Rahu. Ketu is known to drive people towards spiritualism, asceticism and enlightenment. Ketu sets a person free from the shackles of worldly desires and brings the native closer to God. Ketu is considered as a malefic planet that is known to create lot of hurdles and mishaps in a person’s life if positioned in an unfavourable position in the birth chart. It makes the native go through a tough time in order to get closer to God and thus reach emancipation.

In order to safeguard yourself from the malefic effects of Ketu and to gain spiritual upliftment, good health, happiness and prosperity you can install the Ketu Yantra in your house, office or even wear it as an ornament. The Ketu Yantra is a sacred instrument that consists of numbers that are arranged in a symmetric design that resonates with the powers and positive frequencies of Planet Ketu. This mystical diagram has the power to attract the principles of Ketu through the Ketu Mantra. This powerful Yantra resonates with the positive energies of Ketu and blesses the worshipper with spiritual growth, fortune, good health and gives courage to overcome difficulties.


Ketu Yantra: An object of Meditation

This Yantra can also be used for meditating over the planet Ketu. This will help in making you more focused and mentally stable. It will also aid in attaining union with the deity of the planet Ketu through geometric visualization. This Yantra is the window through which you can align with divine energy. Through resonance it connects you to the energy present in the cosmos. 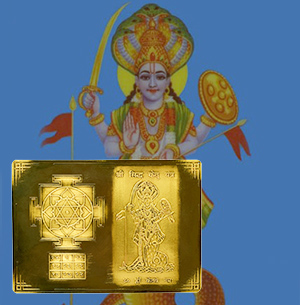 When you look at the KetuYantra, you will notice certain numbers printed, engraved or embossed on it. These numbers make a mathematical design. When you look closely, whichever way you add the given numbers, be it horizontally, vertically or diagonally, the sum of it remains constant. The upper centre of this diagram contains the number for each respective planet.

According to Hindu astrology planet Ketu represents a collection of both good and bad karmas as well as spiritual influences and supernatural influences. Ketu is denoted as a worldly malefic and spiritual benefic as it causes loss and sorrow which ultimately makes an individual turn towards God. Ketu is also known as karaka or indicator of wisdom, intelligence, fantasy, non-attachment and insight. Ketu is believed to ward off the effects of snakebite and illness that arises due to poison. Ketu also blesses the devotee and his/her family with wealth and good health. It is believed that a person can attain great spiritual heights when under the influence of Ketu.