Linga and its significance 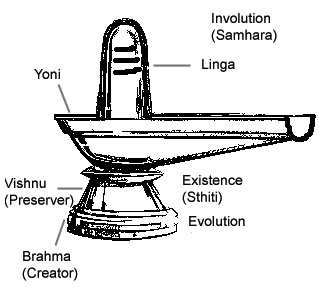 Linga Represents The Formless Siva
Siva-Linga speaks to you in unmistakable language of silence: "I am one without a second. I am formless." Pure, pious souls only can understand this language. A curious, passionate, impure foreigner of little understanding or intelligence says sarcastically: "Oh! The Hindus worship the phallus or sex-organ. They are ignorant people. They have no philosophy." When a foreigner tries to learn the Tamil or Hindi language, he first tries to pick up some vulgar words. This is his curiosity-nature. Even so, the curious foreigner tries to find out some defect in the worship of symbols. Linga is only the outward symbol of the formless being, Lord Siva, who is the indivisible, all-pervading, eternal, auspicious, ever-pure, immortal essence of this vast universe, who is the undying soul seated in the chambers of your heart, who is your Indweller, innermost Self or Atman and who is identical with the Supreme Brahman.

Sphatikalinga - A Symbol Of The Nirguna Brahman
Sphatikalinga is also a symbol of Lord Siva. This is prescribed for Aradhana or worship of Lord Siva. It is made up of quartz. It has no colour of its own, but takes on the colour of the substances which come in contact with it. It represents the Nirguna Brahman or the attribute-less Supreme Self, or the formless and attributeless Siva.

The Mystic Shakti In The Block Of Stone
For a sincere devotee, the Linga is not a block of stone. It is all radiant Tejas (energy) or Chaitanya (consciousness). The Linga talks to him, makes him shed profuse tears, produces horripilation and melting of heart, raises him above body-consciousness, and helps to commune with the Lord and attain Nirvikalpa Samadhi. Lord Rama worshipped the Siva-Linga at Ramesvar. Ravana, a learned scholar, worshipped the golden Linga. What a lot of mystic Shakti there should be in the Linga!

May you all attain the formless Siva through the worship of the Linga, the symbol of Lord Siva which helps concentration of mind and which serves as a prop for the mind to lean upon, in the beginning, for the neophytes.

The Shivalingam denotes the primeval energy of the Creator.It is believed that at the end of all creation, during the great deluge, all of the different aspects of God find a resting place in the Lingam; Brahma is absorbed into the right, Vishnu to the left and Gayatri into the heart. The Shivalingam is also a representation of the infinite Cosmic Column of fire, whose origins, Vishnu and Brahma were unable to trace.

Legend has it that Parvati fashioned a Shivalingam with a fistful of sand at Kanchipuram and worshipped Shiva; this lingam is known as the Prithvilingam, denoting the primordial element earth. Shivalingams in several temples are swayambus, or that which appeared on their own, or that which is untouched by a chisel. On the other hand, there are temples where the Shivalingam is carved out of stone and installed. The highly polished Shivalingams of the Pallava period bear several stripes, as in the Kailasanatha temple at Kanchipuram.

The bottom of the pedestal [named Avudaiyar in Tamil] represents Brahma, the octogonal middle represents Vishnu and the upper circular portion represents Shiva. The upper portion of the Shivalingam may be of various shapes, cylindrical, elliptical, umbrella shaped. Images may also be (rarely) carved on a Shivalingam.

Nandi, the bull is depicted facing the sanctum in all Saivite temples, symbolizing the human soul Jeevatma yearning for realizing its oneness with Paramatma, the ultimate reality.
The stones are made of crypto crystalline quartz and legend has it that they formed when a meteorite fell to earth several million years ago. The natural movement of the river is believed to help create the egg or oval shape of the stones. They're only gathered on one day each year and are hand polished to give them a smooth and gleaming surface.
Shiva Lingam's are said to have one of the highest frequency vibration rates of all the stones on earth. As such, the vibration is said to be perfect for purification purposes, whether at home, work or in an area of sacred space.

The Story about the Bana Lingams
There is a story narrated in Aparajita-pariprchchha (205, 1-26) about the origin of the bana-lingas and their association with the Narmada river. Siva wanted to destroy the "tri-pura", which had been obtained as a boon by the arrogant demon Banasura, and he let go a fiery dart from his great bow "pinaka". The dart broke the three "puras" into tiny bits, which fell on three spots: 1, on the hills in Sri-kshetra (of unknown identity), 2, on the peaks of Amarakantaka in the Vindhya ranges, and 3, on the banks of the holy river Narmada. The bits that fell in these places soon multiplied into crores,. each bit becoming a linga. As they formed part of the possession of Banasura, they were called Bana-Lingas. Amarakantaka, the peak in Madhya Pradesh, is in close proximity to the source of the river Narmada, which according to the puranas, originated in the Vindhya mountains and flowed in the Kalinga country. Padma-purana says that there are along this river as many as sixty crore and sixty thousand holy ghats, all of which are associated with bana-lingas and raudra-lingas.

Linga Purana underlines that prakriti is a source of the manifestation of the linga. It explains that of the Trinity, Brahma represents the seed or bija, Vishnu the receptacle or yoni and Rudra the seedless or nirbija (from which the seed has emerged without a cause), but is the cause of the Universe ( bija). Thus the personal forms of deities belong to the realm of the linga. Above the linga and the alinga and all the manifest forms, Siva is the ultimate.Sankhya philosophy states that the linga signifies both prakriti and vikriti According to the various Puranas and the Saivagams, the linga symbolises the Supreme Being which stands for god himself and is the seat of entire creation and its dissolution.
According to the Linga Purana, lingas are made of different materials. It is believed that they were made by Viswakarma and offered to many gods. However, the six main kinds of lingas are those made of stone or rock or the sailaja linga, those made from jewels or the ratnaja linga, ones made from metal or dhatuja, made of wood or the daruja linga, the mntika linga made of clay and finally the ksanika linga which is made on the spot from any material. Each of these six kinds are further subdivided and when all are calculated the total amounts to forty-four types of lingas.

Worship of different types of lingas yields different results. The ratnaja linga yields prosperity and gives glory, the sailaja linga the achievement of perfection, sarvasiddhi. The dhatuja linga helps to accumulate wealth, the daruja linga yields enjoyment, while the lingas made from earth help in acquiring all perfection.
The linga thus symbolises transcendental power which is identified as Brahman, and is the centre of Saivite philosophy. Siva is represented in beautifully sculptured forms as well as by the symbolic linga. The linga thus has many dimensions and interpretations. Yet it remains a unique spiritual symbol which does not restrict itself to any one religious order, but is a part of the Hindu way of life.

How To Keep Shivlinga at Home: Direction of Placement of Shiva Linga