Who is Lord Kamdev? 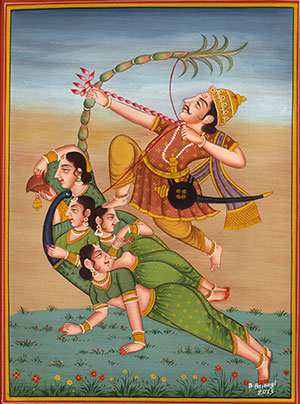 Kamadeva is the god of human love and passion who is known to awaken carnal desires among humans. Etymologically, Kama means sensual desire and Deva means a divine being. He is regarded as the heavenly god of love who arouses passion and love among those struck by His cosmic arrow. For this reason, Kamadeva is considered as one of the most popular and well-known deities. References to Kamadeva can also be found in various scriptures, including the Rig Veda, Atharva Veda and others, although He figures more prominently in the Puranas.

Background of the God of Love

The birth of Kamadeva has been accounted in several different ways. Some Puranas state that Kamadeva was created from the mind of Lord Brahma while according to other beliefs, He is the son of Sri. He has also been seen as Lord Vishnu, Lord Krishna or Pradyumna, Krishna's son, is regarded an incarnation of Kamadeva. In some places Kamadeva has even been mentioned as the son of Lord Vishnu.

The God of love is illustrated as a handsome, youthful winged man with a greenish (sometimes shown reddish) complexion. He carries a special bow made of sugarcane with a string of humming honeybees and arrows that are with five kinds of scented flowers. He rides a parrot which is His vehicle. He is accompanied by Vasanta, the god of spring and Apsaras, Gandharvas and Kinnaras.

Kamadeva's consorts are Rati, the daughter of Daksha and Priti. Rati is mentioned more prominently, who symbolizes desire. He is known by names such as Ratikanta, Ananga, Madana, Pushpavan, and Pushpadhanva and several others.
Legends Associated with Kamadev

When Lord Shiva's consort Sati entered into fire and embraced death due to the insult her father Daksha showed to Lord Shiva, He was completely devastated and angry. He abandoned His duties and went into severe meditation. This led to a destructive imbalance in the world, which worried all the Gods.

Meanwhile, Sati was reborn as Goddess Parvati. She wished to marry Lord Shiva but He was least interested and chose to ignore Her feelings. The gods decided to approach Kamadeva to put an end to the sorry state of the world. Kamadeva shot a love arrow on Lord Shiva, who was in deep meditation. He was furious by the interruption and in a fit of anger, opened His Third Eye, which killed Kaamadeva. However, the arrow had hit Lord Shiva as it was desired, and as a result He married Parvati. This act of Kamadeva is regarded as a sacrifice He made, and is believed to be a basis of the ritual of burning observed in Holi. On the basis of this legend, people make offerings of sandalwood paste to Kamadeva to lessen His burns and mango blossoms that he loved on Holi.

In the meantime, Kaamadeva's wife, Rati pleaded before Lord Shiva for forgiveness and entreated to revive Him. Till the time Kamdeva was dead due to the lethal wound from Lord Shiva, love disappeared from the world. Lord Shiva ultimately decided to revive Kamadeva though He accorded only a bodiless form to Kamadeva (hence the name Ananga- the one without a body). Variations of this account have also been found in some scriptures, though their end result has been depicted in the same manner too. In certain narrations, Goddess Parvati approached Kamadeva to strike an arrow of love for Her so that She could win Him as Her husband.


The following Kamadeva Gayatri Mantra can also be chanted to address Him:

Meaning:
Om Let me be meditative for the God of Love, God who is the forest of flowers, bestow upon me the power of intellect so that my mind id illuminated.