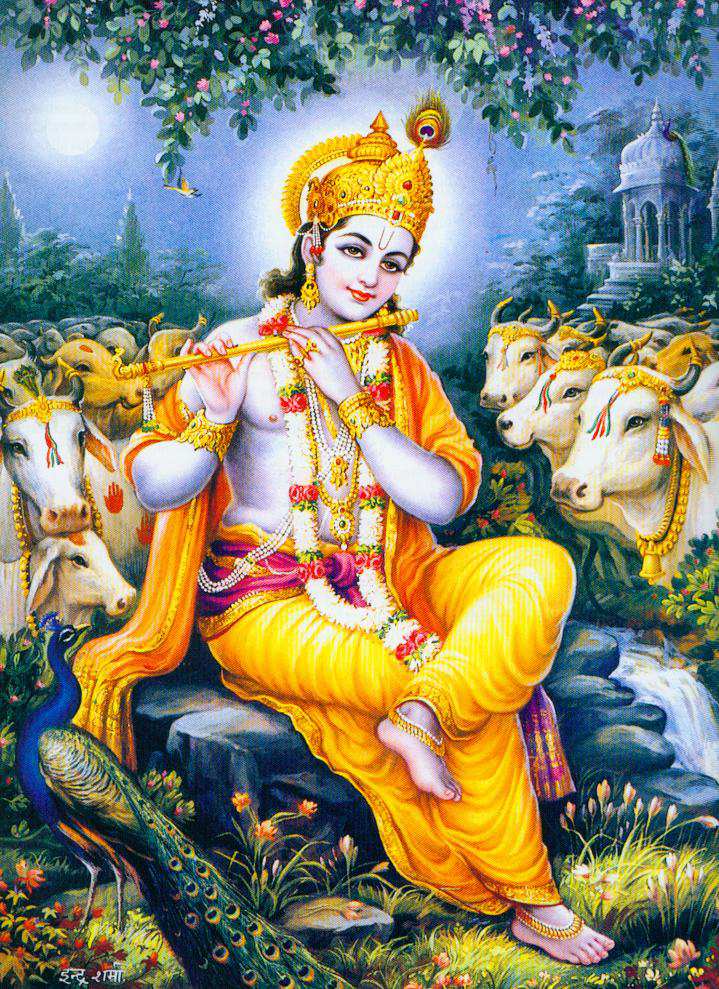 Most devotees not only revere Lord Krishna but also love Him and His leelas passionately. He is one of the most popular Gods whose names, legends and acts are celebrated with gay abandon. He is considered the most dominant avatar of Lord Vishnu; His devotees transcend the bounds of religion, nations and creed. For many, Lord Krishna is the Supreme Being or the Purna Purushottam. He is the chief figure of the holy Bhagwad Gita in which He narrated precepts that influence lives tremendously to this date. Right from the moment Lord Krishna took birth in the prison cell where His parents, Vasudeva and Devaki were confined, every act and all His Leelas are remembered and depicted in narrations, songs, art and discourses in vivid detail.

Several engrossing stories about Bal Krishna flourish. He was born as the eighth incarnation of Lord Vishnu whose responsibility was to end the evil king Kansa (His maternal uncle) who wreaked sufferings on the innocent subjects he ruled. Kansa had imprisoned Devaki and Vasudeva after hearing a forecast about being killed by their eighth born. Kansa began killing all the children born to Devaki and Vasudeva, but when Sri Krishna was born, Vasudeva made a miraculous escape with the new-born to Gokul where He would be raised by Yasoda and Nanda. Oblivious to it, Kansa tried to kill the infant in the new-born Krishna's place thinking it's the Lord, but the attempt was unsuccessful as the infant slipped out of his hand and ascended in the sky.

Little Krishna was then raised by Yasoda and Nanda as their child where He was loved upon by one and all. He showed several magical Leelas like stealing and eating 'Maakhan" his favorite delicacy with His friends. Once Yasoda saw the entire universe in His little mouth, a sight which the child erased from her mind magically. Bal Krishna showed exceptional magical powers which He used to kill Putna, a female demon by sucking on her breasts to kill Him.

Bal Krishna also destroyed many demons like Trunavarta, Pralambasur and others including Kali Nag to famously turn the holy river Yamuna free of poison. Due to the poison His complexion turned blue (often referred to as shyam meaning black). Hence, He is also known as the dark-complexioned, handsome Lord Krishna. He is known by several other names including Balgopal, Govinda, Hari, Keshava, Madhusudan and several other names. He is also worshipped as a cowboy who loved the cows He tended to.

Lord Krishna was very popular among the Gopis, who loved Him dearly and craved to be with Him always. He performed cosmic dances which left everyone enraptured just like He did by playing His flute. These objects and aspects are divinely special and celebrated by devotees with great grandeur. He lived in Gokul after which He went to live in Vrindavan and continued with His exploits. Once to protect the people of Vrindavan from the fury of Indra let loose in the form of torrential rain, He lifted the Govardhana hill with His little finger and held it up for all of nine days.

Radha and Krishna together

The love between Radharani and Krishna is celebrated greatly in Hindu mythology. She was His spiritual lover who mesmerized Him and shared a bond that transcended every definition o love. Hence Radha is also revered along side Lord Krishna as She had an intrinsic control over Him. Radha and Lord Krishna together are Shakti and Shaktiman. They are inseparable and cannot exist without each other. Though they did not marry their love remains eternal.

Rukmini was Krishna's consort at a later stage and so was Satyabhama. Lord Krishna is known to have married 16108 gopis after rescuing them from Narkasura, the evil asura son Bhudevi and Lord Lord Vishnu as they had nowhere to go and no one would accept them. Lord Krishna's Raas Leelas are legendary. They portray the love in His heart which He expressed by showering it on the gopis.

Krishna, the Supreme figure of the Mahabharata

Krishna lived in Hastinapur with the Pandava and Kaurava kings. A conflict that had been seething between the Pandavas and Kauravas lead to the epic war, Mahbahrata, in which Lord Krishna took the side of the Pandavas as the charioteer of Arjuna. He delivered the great Bhagwad Gita during the epic battle to infuse sense and strength into Arjuna to carry out his duty to fight like a true warrior even though it meant attacking his kin. Bhagwad Gita is considered to be one of the most sacred and important texts across the world.
Lord Krishna's ascent to the heavens

He cast off His body after a full 125 years on the earth and left for His abode after being killed by a Jara, a hunter. His life, exploits and supremacy teach valuable lessons. Captured is the essence in the following mantra:

Meaning of the Mantra:
Om, Let me meditate on the god whose belly was tied by a rope,
Oh, consort of Rukhmani, give me superior wisdom,
And let God Krishna enlighten my mind.

Meaning:
" Ode to Sri Krishna and Lord Rama who are both two bodies but one being, as they are the incarnation of Sri Hari Vishnu "