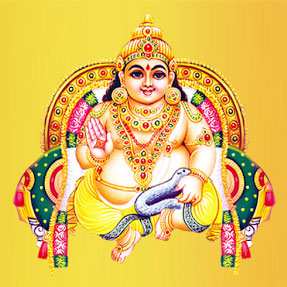 Lord Kubera, also known as Kuber, Kuvera and Dhanpati, is worshipped as the God of Wealth by Hindus. He is known as the Treasurer of Gods who showers riches on those who worship Him with utmost devotion. A benevolent, fair-complexioned divine being of short stature and a pot belly is how Kubera is usually depicted. The meaning of name is believed by some to indicate 'deformed' or 'unpleasant' as His iconography reveals but He is known to keenly shower riches on those who please Him as well as distribute wealth justly to the needy by scattering it from the magic He flies in.

Though His name is not mentioned recurrently and is chiefly conspicuous in the epic Ramayana, He is indisputably an important deity whose presence figures in a number of legends of Hindu mythology. His worship is also widely observed in Buddhism and Jainism. His images and figurines have also been found in lands as distant as Indonesia, Tibet and Vietnam.

Kubera is also principally revered as the God who bestows fortunes and prosperity and yet not many are aware that He is a multi-faceted divine personality. He is deputed as the king of Yakshas (semi-divine species like Rakshasas, Guhyakas, Kinnaras, Kinnoris and Gandharvas) who assist Him in safeguarding the treasures lying in the lap of the earth and in the roots of the trees.

He is also deputed as one of the Dikpala and Lokpalas (custodians of the directions). He has been accorded exclusive authority over the North direction (Uttara disha). On Dhanteras during Diwali, Kubera is worshipped with Goddess Lakshmi as it is known to bless one with wealth and prosperity.

Crores of devotees throng the world-famous Tirupati temple in South India. Kubera figures as a prominent entity in the temple as the ritual of donation is connected to Him. It is believed that Kubera lent some money to the god Venkateshwara (a form of Lord Vishnu) for his marriage with Padmavati. In commemoration of this, devotees donate money in Venkateshwara's Hundi (donation pot) in the temple on behalf of Lord Venkateshwara as an act of repaying the loan to Kubera.

Lord Kubera and His physical appearance

Much is said of the peculiarities and uniqueness of the appearance of the Gods in Hinduism. The discussion of the manifestation of Lord Kubera is no different. He is seen bedecked with a lot of jewelry carrying a bag of gold coins, a mace, a mongoose and occasionally fruit like a pomegranate in hands. As mentioned earlier, Kubera has been blessed with wealth and abundance. However, the same cannot be said about His appearance. He is portrayed as a dwarf who looks unattractive and deformed with uncharacteristically white skin. He is often shown with only one eye (believed to be lost due to an angry reaction from Goddess Parvati who once mistook Him to be winking at Her lustily), three legs and a set of only eight teeth. The depiction may conjure up a picture of ghastly repulsiveness, but the serene expression the Lord wears all negativities; He does not need good looks but carries forth focusing on His responsibility of looking after and discharging wealth and abundance in the world.
Early account of Lord Kubera

A number of beliefs propounded by various ancient scriptures depict Kubera in different ways. Some state that Kubera was the ruler of evil spirits. He has also been portrayed as the chief of spirits of darkness or even the Lord of criminals and thieves. Kubera has also been described as one born from a cow.

Kubera is basically believed to be the son of Sage Vishrava who also fathered Ravana, Kumbhakarna, Vibhishana and Soorpankha to render them His step-siblings. According to some mythological beliefs, Kubera was also Lord Brahma's grandson who deserted His father Vishrava and went to live with His grandfather. Pleased with His act, Lord Brahma conferred immortality upon Him and also the all the riches of the world (Nidhis). Lord Brahma also awarded Him Pushpaka, a spectacular gigantic aerial vehicle that would transport Him anywhere at a speed willed by Him.

Kubera was originally the ruler of Lanka but His scheming step-brother Ravana supplanted Him by performing severe austerities to obtain powers for that. He also seized Kubera's magic vehicle Pushpaka and banished Him from lanka. Vishwakarma, the builder of the Gods created a new abode for him called Alaka or Alakapuri in the Himalayas. Alakapuri was in close proximity to Mount Kailash, the abode of Lord Shiva. His new kingdom was splendid and opulent beyond imagination. He also owned a beautiful garden called Chaitrarath on Mount Mandara. Since it was located in the North, the direction Kubera rules, it was ideal for Him to dwell in and discharge His duties of safeguarding treasures of gold, silver, jewels, pearls and the nine Nidhis (special treasures) on the earth.


The Famous Feast of Kubera

Numerous legends are associated with Kubera. The Feast of Kubera is worth mentioning here as the moral it conveys is an important one that materialistic being in possession of great wealth certainly need to learn. The legend is recounted and narrated many a times teaches us that pride comes before a fall and inspires us to accept that we should never assume arrogance for material possessions.

Once Kubera, with an intention to show off His wealth, organized a grand feast and so invited Shiva and Parvati The invitation was rejected citing inability to attend but it was promised that Ganesha would represent them. Kubera made light of it and proclaimed that he could feed thousands of children like Ganesha.

The day of the feast arrived and Ganesha went to Kubera's palace. When He sat down to dine, He finished off all the food offered to Him. More food was offered to Ganesha as His hunger wasn't satiated. Kubera kept offering food to Ganesha, who would ask for more. In some time, all the food at the palace was exhausted where even the guests hadn't eaten and Ganesha was still very hungry. In order to satisfy His hunger, He began eating the dishes and even the furniture around. Kubera was frightened on seeing the turn of events, more so when He noticed that even His kingdom could be devoured by Ganesha.

Kubera ran to Lord Shiva and told Him what was happening. He implored Lord Shiva to provide a solution. He simply smiled and gave a handful of rice to Kubera for Ganesha and told Him to serve it with humility. Kubera realised His folly and fell at the feet of Lord Shiva, begging for forgiveness. When the bowl of rice was offered to Ganesha with humbleness, His hunger was satisfied.

Kubera, the great God of wealth and extraordinary Siddhis is also known as Iccha-vasu (who can attain wealth at will). He is also known as Ratna-garbha (womb of jewels) who is in supreme command of all the riches in the world.

If you wish to invoke and please the great giver of wealth to shower upon you cosmic riches and amplify cash flow in business and at home, chant the divine Kubera Gayatri mantra given below facing the north direction:

Meaning:
We pay obeisance to Kubera, the king of the Yakshas and son of Vishrava.. We request the great Lord of wealth and fortune to bless us".
You can also keep the Kubera Yantra at home to attract wealth, open new avenues of income and boost business. Rudra Centre offers a range of Kubera Yantra that you can obtain and ensure your treasury overflows with wealth and abundance always.