Explore Everything about God Varuna Devta 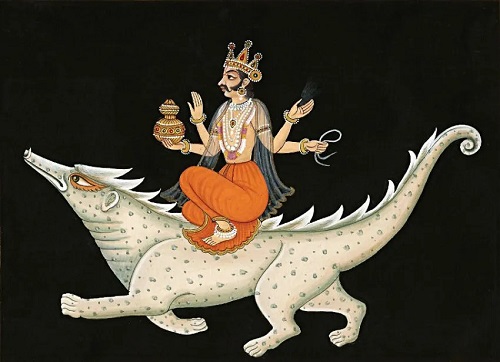 Hinduism is filled with numerous formidable and strong Gods and Goddesses with extraordinary divine powers. Most are aware of the mythologies of popular deities such as Krishna, Durga, Ganesha, among many others. However, there are several Gods and Goddesses whose intriguing tales are not celebrated by many yet. Let’s take a look at one of the lesser-known Gods of Indian mythology – Lord Varuna.

Who is God Varun Dev?

Venerated as the God of Water, Lord Varuna and his influence expand to the underwater universe. The Hindu Goddess Varuni is believed to be his consort. His mount is said to be the Makara (mythical sea-creature or crocodile) and his weapon of choice is the Pasha (noose). Lord Varuna is a deity who is believed to be the guardian of the western direction.

As per the Puranas, Lord Varuna is the son of Sage Kashyapa and one of the twelve Gods regarded as Adityas, thanks to their origin from the Mother of Gods, Aditi. In a couple of texts from the Hindu scriptures, he is regarded as the father of the Vedic sage Vasishtha.

Varuna is considered to be the lord of the waters and was assigned the job of controlling the clouds and rains. Thus, he is revered as the King of Waters and manages the river, seas, oceans and all the water bodies. It is also a widely held assumption that worshipping the deity shields us from thunder and lightning.

Lord Varuna is mentioned in Japanese Buddhist mythology as Suiten. He is also worshipped among Jains. 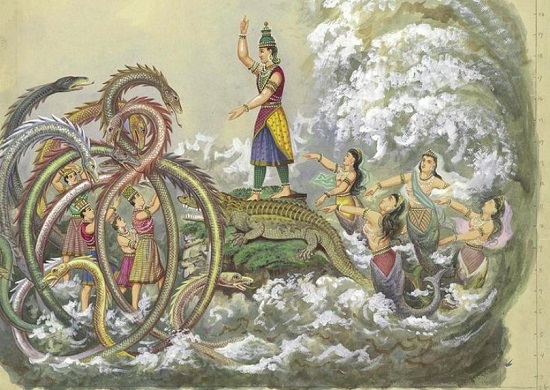 Vedas
Lord Varuna is believed to be one of the most ancient deities in Hinduism and is regarded as a universal monarch. Formerly, Varuna was considered to be the King of Gods who held the most power in Vedic India. In Rigveda, Varuna is thought to be the keeper of the moral law, one who disciplines those who commit a sin without any mercy, and who pardons those who do something wrong and are apologetic about it. His connection with water bodies such as oceans and rivers is extensively cited in the Vedas. Hymn 10.123 of the Rigveda describes Hiranyaksha (golden-winged bird) as the messenger of Varuna.

Lord Varuna and Lord Mitra (another Vedic God) are believed to be the Lords of societal affairs, including the oath and are frequently termed as ‘Mitra-Varuna’. As the hymn 5.63.3, both Varuna and Mitra are categorized as Asuras in the Rigveda. But they are also addressed as Devas as well (Hymn 7.60.12).

According to one of the mythologies, Varuna, being the ruler of the Asuras, was adopted and converted into a Deva after constituting the primordial cosmos, levied by Indra after he overthrows Vrtra.

In the Yajurveda, Varuna is referred to as the patron God of physicians, one who can come with a thousand remedies. His abilities and expertise as well as the connection with ‘all-comprehensive wisdom’ are cited in the Atharvaveda.

Lord Varuna is cited in the early Upanishads. In Brihadaranyaka Upanishad, he is mentioned as the deity of the western quarter, but one who is established on ‘water’ and completely reliant on the ‘heart’ and the fire of the soul. He is mentioned in Taittiriya Upanishad as well. 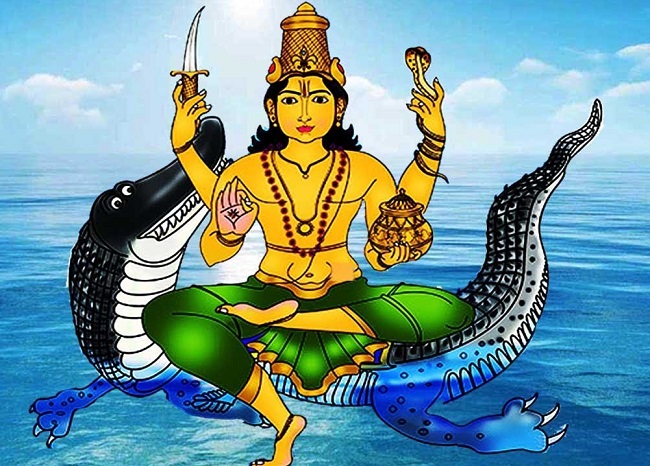 The iconography for Lord Varuna showcases the deity in varied forms. Lord Varuna is commonly showcased as a fiery white god, with an ideal posture and is portrayed riding a marine creature, referred to as the Makara. The descriptions of the Makara vary. Some assume it to have originally been a dolphin-like creature or a half-crocodile. But there are others who think it has the legs of an antelope and the tail of a fish.

As per the Vedas, Lord Varuna is believed to have four faces, one closely similar to the features of the Agni, the God of Fire. Lord Varuna comes with several arms of grace, and a noose created from a snake. He holds the noose in his right hand and is shown with a shimmering and sparkling golden foot.

He is generally portrayed to be handsome and sharply dressed. He is shown clad in a short, floating, sleeveless golden cloak with a sturdy and robust golden-colored armor. Sometimes, Lord Varuna is also portrayed as riding on a chariot drawn by seven swans. He is showcased holding the lotus, conch, noose and a container of gems along with an umbrella held over his head. A certain section of devotees also relates to him as a deity carrying a serpent.

He is usually seen with his two wives Varuni (Goddess of Liquor) and Riddi (Goddess of Prosperity). Occasionally, his first three sons – Pushkara (Nourisher), Bala (Strength) and Sura (Liquor) are also shown accompanying him. There are several images that demonstrate Lord Varuna to be seated with his wife Varuni, on a sparkling throne of diamonds and the Gods and Goddesses of the varied lakes, springs and rivers making his court.

The iconographic and mythological depictions of Lord Varuna demonstrate a massive amount of symbolism connected to the sea voyage. This is why it is vital to note that Lord Varuna has been prayed to in varied forms in different parts of India and Southeast Asia. For instance, the deity is showcased as the God of Sea Voyage in the Hoysala temple art and architecture. Also, in ancient Assam, renowned for being the center of Astrolatry, Lord Varuna was venerated as one of the twelve Adityas (Suns). This multi-layered and complex portrayal enables Lord Varuna to be one of the most intriguing Vedic deities.

Story of Varuna: god of sea in Hindu Mythology 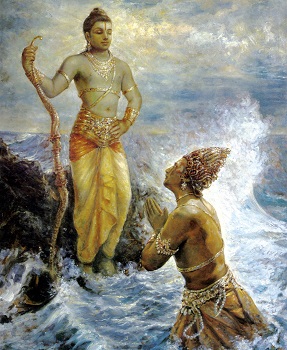 This is one of the most popular tales associated with Lord Varuna. The deity played a notable role in the Hindu epic Ramayana. After Goddess Sita was kidnapped by the demon king Ravana and held captive in Lanka, Lord Ram examined the waters to cross over to the island to free his wife. With utmost sincerity and devotion, Lord Ram went deep into penance for three days and three nights to pray to Lord Varuna, the God of the Oceans.

When Lord Ram did not receive any reaction from the deity, he was livid and decided to cause the destruction of the oceans and the creatures living there. With his bow and arrow, he furiously started destroying the oceans with celestial weapons and began burning the waters and slaying the creatures residing within. The Vanaras (monkeys) were baffled and were afraid of witnessing the infuriated Lord Ram annihilating the oceans. Lord Lakshman, his brother, tried to calm Lord Ram.

Just as Ram summons the Brahmastra, believed to be the most powerful weapon that can obliterate all creation, Lord Varuna emerges from the depths of the waters. Deeply disturbed, he appeals to Ram and conveys his helplessness at the situation. He beseeched Lord Ram to annihilate the demonic race that exists within the ocean. Ram purified the water and cleansed them of any impurities, thus making the ocean a cleaner water body. This impressed Lord Varuna greatly and he promised to keep the waters still for Lord Ram’s army to pass safely. 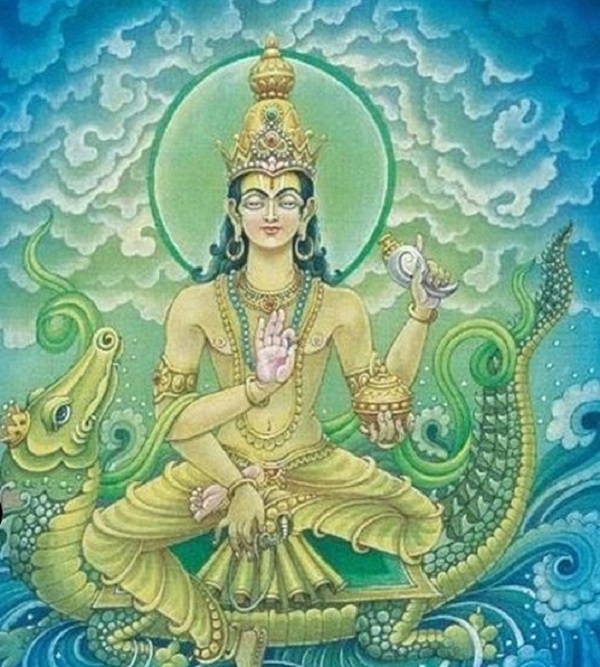 Lord Varuna is believed to be one of the most ancient Vedic Gods and his existence permeates the entire universe. Since he is connected to rains, water, clouds, rivers, seas, oceans and all the water bodies, Lord Varuna is considered to be the sustainer of life by delivering rain and crops by activating Vayu.

Lord Varuna is also venerated in his role as a God of Law & Underwood and is believed to possess the qualities and traits of a Solar deity. He is also intimately connected to the night and the moon planet.

Lord Varuna is highly respected in Vedic texts which revere him as an omnipotent force of the universe. He is also connected to the Lord of the Heavens, Indra. Worshipping Lord Varuna is key to the Sandhyavandanam ritual and it is believed he is blessed with the power to bestow immortality.

Lord Varuna is regarded as the ruler of the universe and lives in the highest world. His knowledge and power are believed to be infinite. He has a thousand eyes which he uses to supervise the whole world. Hence, he is observed as the Lord of the Moral Law. He penalizes those who disobey the law and only forgives them out of compassion if they choose to be remorseful.

Lord Varuna is also considered to be the protector of the western direction. He is one of the most significant deities in the Hindu pantheon. Varuna is also worshipped in numerous religions across the globe, including Buddhism, Shintoism and Zoroastrianism. 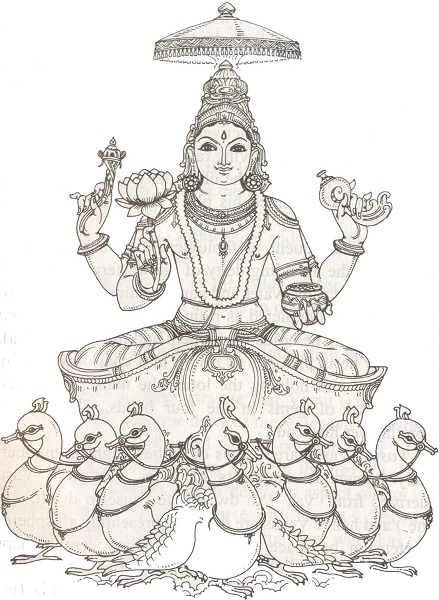 In some temples of the Indian subcontinent, he is shown riding on a crocodile or a Makara (mythical sea-creature in Indian mythology). Occasionally, he has also been portrayed as riding on a chariot drawn by seven swans.

Jhulelal is believed to be an avatar of Lord Varuna by Sindhi Hindus. The festivals of Cheti Chand and Chalio are devoted to Jhulelal.

Cheti Chand: The Cheti Chand festival occurs in the Hindu month of Chaitra. It demonstrates the commencement of spring and harvest. Lord Varuna, as Jhulelal, has become the protector of the Sindhi Hindus.

Chaliya Sahib: This is a 40-day long festival venerated by Sindhi Hindus to convey their gratitude to Jhulelal. This occasion is celebrated annually in the months of July to August. It is a thanksgiving occasion to pay homage to Lord Varuna for hearing their prayers.

Nārali Poornima: This ceremonial day is marked by Hindu fishing communities in Maharashtra, India, especially in Mumbai and the Konkan coast. It occurs on the full-moon day of the Hindu month of Shravan which falls either in July or August. The devotees observe this day by offering rice, flowers and coconuts to Lord Varuna, the deity of ocean and waters.

Raksha Bandhan: Lord Varuna is also closely linked to the festival of Rakhi in specific regions of Western India. On this day, worshippers present coconuts to the Lord as a mark of respect.