India is a vast piece of land with every state sporting a different culture, language and faith. This results in the country generating an array of festivals on its soil which is a wonderful reflection of its diversity. The auspicious occasions are also devoted to one or more Gods and/or Goddesses. The worshippers use these festivals to seek blessings from the specific divinity. One such Indian festival is the Narada Jayanti, dedicated to God-Sage Narada.

What is Narada Jayanti? 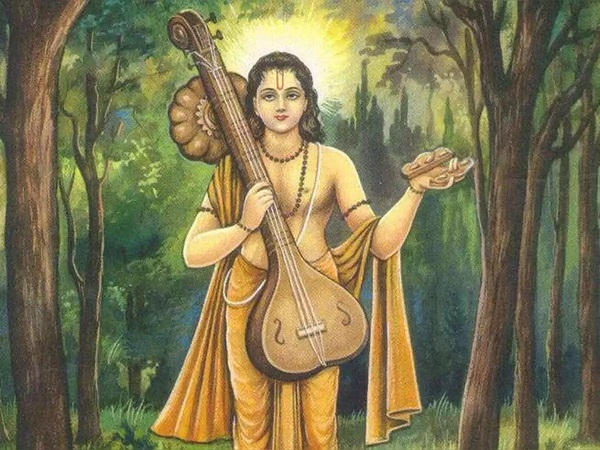 Narada (or Narada Muni) was considered to be the messenger of deities and a significant Vedic sage. Millions of devotees celebrate the day Devrishi Narada Muni was born as Narada Jayanti. Sage Narada was assumed to move through varied lokas – Aakash (Heaven), Paatal (Netherworld) and Prithvi (Earth), conveying messages and information from and to the deities. He made ample use of his musical instrument Veena to deliver the messages via singing.

He was an ardent devotee of Lord Vishnu and would often sing devotional songs dedicated to him. Narada Muni was said to be both knowledgeable and also mischievous. This day is also referred to as ‘Patrakar Diwas’ in specific regions of India since Devrishi Narada is believed to be the precursor of journalists and musicians. In Northern Indian states, this auspicious day contains numerous seminars and meetings to commemorate the birth anniversary of Narada Muni.

After Buddha Purnima, Hindus observe the birthday of Devrishi Narada Muni every year. As per the Hindu calendar, Narada Jayanti is believed to fall on the first day of Jaishtha in Krishna Pratipada tithi, the third month of the Hindu calendar. As per the South Indian calendar, Narada Jayanti tithi occurs in the Vaishakha month in Krishna Pratipada tithi. Nevertheless, the date in both the North and South Indian calendars match. 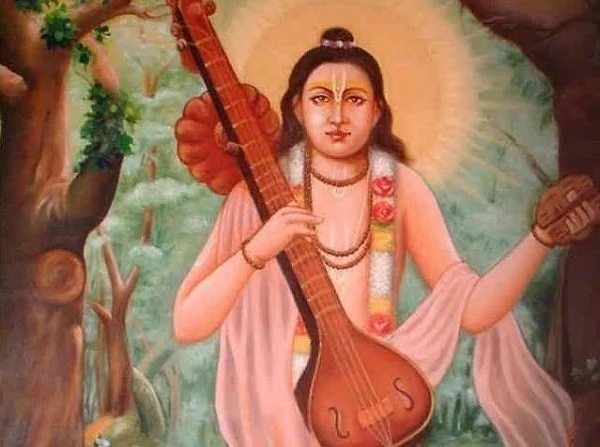 Narad Muni, referred to as the ‘God of Communication’, was believed to be one of the main seven – Saptarishis – who toured the entire universe to disperse information about the different deities. Ancient Hindu scriptures such as the Rig Veda and the Puranas have discussed this great God-Sage in detail. ‘Narad Jayanti’ is devoted to this incredible sage as it marks the day he was born.

This day is commemorated by publication houses and media thanks to Sage Narada’s nature of conveying information, which is their profession. Musicians also pray to the revered sage on this auspicious sage, as he was believed to be the creator of musical instruments. Narad Muni was proficient in Upanishads, Vedas and also the Puranas. He was believed to be an intellectual who knew the fundamentals of communication or language such as grammar, prosody, initiation and so forth. He was bestowed with an amazing memory and logical sense to comprehend numerous situations. He was a highly learned sage who aided in taking care of numerous issues with his communication expertise, thereby averting wars. 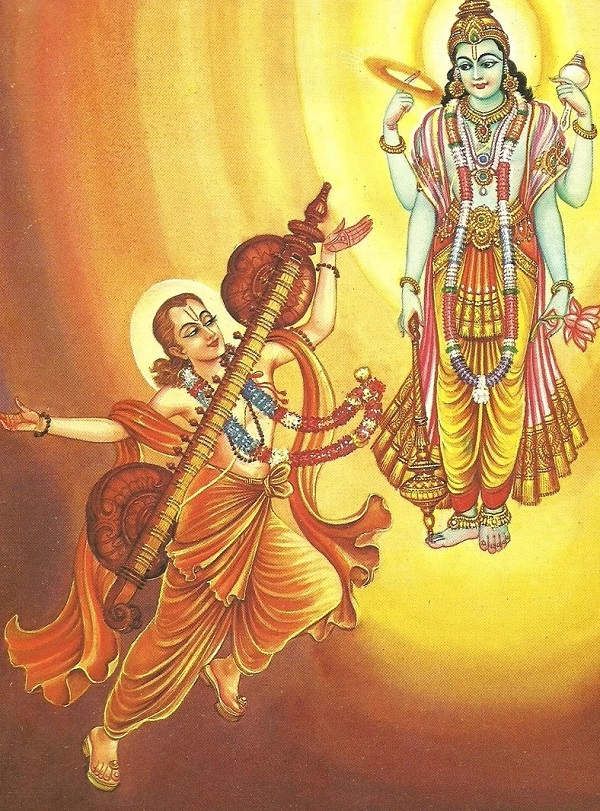 There are a couple of legends detailing the origin of Narada Muni Jayanti. The God-Sage was believed to be the Manas Putra of Lord Brahma. But the Puranas regard him as the son of Sage Kashyapa. As per one of the legends, Narada is believed to be incarnated in the Kali Yuga as poet-saints Thyagaraja and Purandaradasa.

Narada is showcased in all the epics and Puranas where he is steering souls to attain salvation. With a stringed musical instrument in one hand, he had shown up in all the three Yugas. He is believed to be the ‘initiator of quarrels’ between the deities and asuras, though his action has immense spiritual significance with evil being destroyed.

Another tale that talks about Narada is how he influenced Daksha’s sons to practice renunciation and avert marriage. Daksha was enraged and cursed him to roam around worthlessly as a vagabond. As per the story, Sage Vedavyasa split the Vedas as Rig, Yajur, Sama and Atharvana. He penned down the Puranas and the epic Mahabharat but he was not aware that his works were adequate to help humanity. Narada visited him and understood his predicament. He explained that none of the writings talked about the magnificence of the Lord. In Kaliyuga, the road to devotion was believed to be the simplest and swiftest way to liberation.

He motivated Vyasa to pen down the Bhagavad Purana. Another story recounted that once Valmiki had asked Narada about a human who was ideal in thought, word, actions, free of sin and the personification of all merits. Narada mentioned Lord Ram and his attributes. Valmiki was extremely happy on hearing this and wrote the Ramayana.

Sage Narada was considered to be a pioneer in astronomy, music and arts. He has composed the ‘Narada Smriti’ and the ‘Narada Shiksha’ which talks about the principles of phonetics and grammar. He is the writer of the Narada Purana which encompasses lovely stories. His renowned work ‘Narada Bhakti Sutras’ constitutes eighty-four aphorisms on devotions and their features.

He was considered to be an advisor and messenger to the Gods. He gave lessons to Yudhishthira about the merits of humility and the perfect way to live a Dharmic life. He established the background for Dattatreya’s birth. He was considered to be an expert of the Sankhya and Yoga systems of philosophy. He is also viewed as the ‘Saktyavesa Avatara’ of the Lord who is bolstered to conduct miracles on behalf of the Lord.

Since he was such a devoted worshipper of Lord Vishnu, he traveled around three worlds – Aakash (Heaven), Paatal (Netherworld) and Prithvi (Earth) with a Veena reciting the name of his deity – ‘Narayan, Narayan’. He was able to roam around the three worlds thanks to his supernatural abilities.

Narada was a wandering soul who performed his task of interacting between various heavenly folks, updating them about significant activities to which they had no access. He was an incredible musician who used to play the musical instrument ‘Veena’ and sing Lord Vishnu’s hymns. He is regarded as the chief of ‘Gandharvas’ or the celestial musicians. He was regarded as the first journalist on the earth. He kept moving throughout the universe to convey information. He was a significant Devrishi who directed departed souls towards Moksha or Salvation.

Another legend discussing the origin of Narada Muni talks about his previous life. At that time, he was called ‘Upbarana’. He was extremely vain about his looks. Once, a couple of nymphs were attempting to make Lord Brahma happy by dancing. Then Upbarana (Narada) showed up disguised as a woman. It is believed that Lord Brahma was extremely upset with this act of Upbarana and cursed him that he will be born in ‘Shudra Yoni’. Owing to this curse, Upbarana was born to a Shudra and his mother passed away when he was five.

It is believed that after his mother died, the child became a worshipper of God. One day, when this child was sitting under a tree meditating, he acquired a glimpse of the deity. After this experience, he had an intense desire to understand God and see him. After continual austerity, one day the God told him that in this birth, the child will not be able to witness divinity but in his subsequent life, he will receive the good fortune.

In his next birth, this child was known as the son of Lord Brahma, referred to as Narada Muni. He was the only one who had witnessed Lord Vishnu in his ‘Paramatama’ form and thereby was educated about the great truth. Thus, Narada’s birth anniversary is celebrated by millions of devotees as ‘Narada Jayanti’.

How to Celebrate Narada Jayanti? 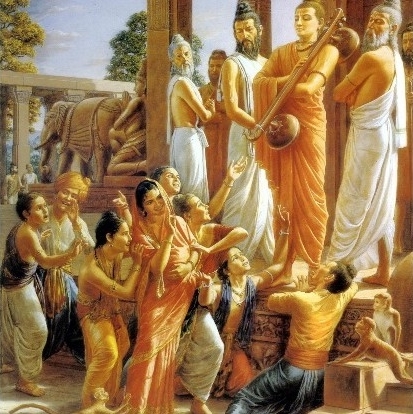 Worshippers commemorate the auspicious day of Narada Jayanti with utmost sincerity and dedication. On this specific day, particularly in the areas of Northern India, numerous academic sessions and seminars are arranged. There are a couple of temples of Narada in Karnataka that are considered to be hugely renowned. Narada Jayanti is celebrated with grand pomp and fanfare in these temples.

Apart from observing a fast, rituals and special prayers are performed with chanting mantras from sacred texts. Worshippers visit temples to offer their prayers and receive blessings. A lavish feast is hosted by the temples. Worshippers are known to feed Brahmins and they should take a dip in the holy water. Since Sage Narada was a great worshipper of Lord Vishnu, an idol or image of Lord Vishnu is venerated on this auspicious day. 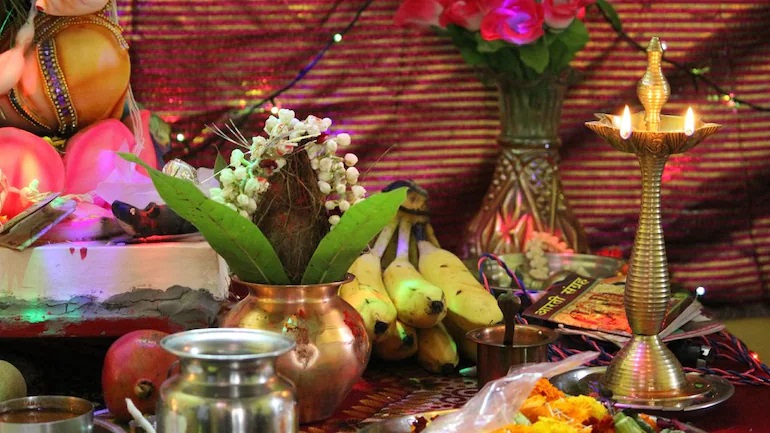