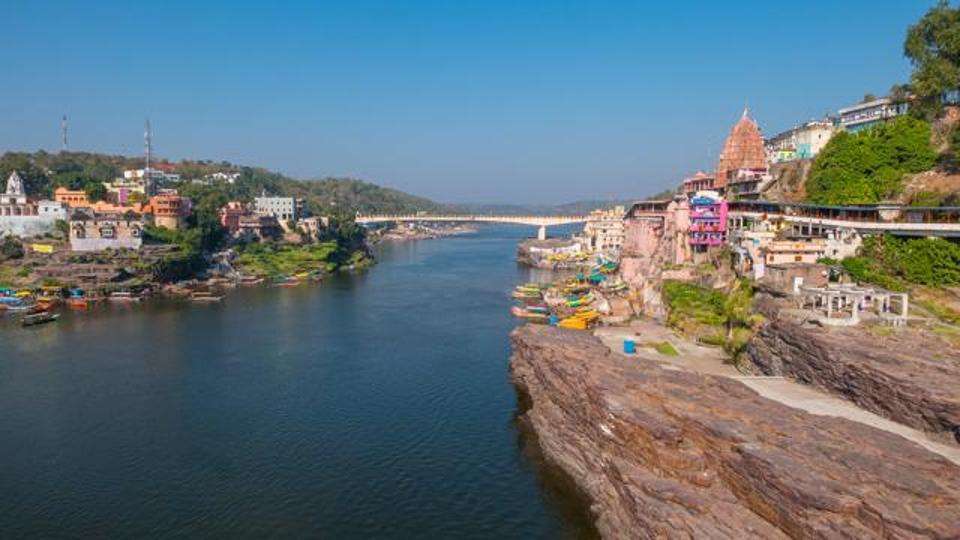 Narmada is a sacred river in India, which is considered the lifeline of the state of Madhya Pradesh and Gujarat, and is also known as Rewa(Reva). In Hinduism, important and sacred rivers are worshipped as Goddesses. River Narmada is among the 5 major rivers of India. Narmada Jayanti is celebrated to commemorate the birth anniversary of the river Narmada on earth. As per Hindu lunar calendar, Narmada Jayanti celebration falls each year on the Saptami (seventh day) of Shukla Paksha (waxing Moon phase) in the month of Magh (Gregorian January-February), which coincides with Ratha Saptami festival, the birth anniversary of Sun God/Surya Dev. Narmada Jayanti Utsav is primarily centred around Amarkantak, the source of Narmada river and people from various parts of India gather to worship this holy river and Her personification as Narmada Devi/Goddess Narmada. She is lovingly adored as Narmada Maiyya by devotees. Devotees take a dip in the holy river and ritualistically offer flowers, diyas etc., and perform Narmada Jayanti puja. It is believed that taking a dip or bath in the holy water of Narmada, washes away the sins of devotees, especially on Narmada Jayanti. Goddess Narmada is said to be the daughter of Lord Shiva, His creation and is also revered as a river in which the Devas(celestial beings and demi-Gods) wanted to take a dip in to be liberated from sins. Being Lord Shiva’s daughter, Narmada is also called Shankari.

The iconography of Devi Narmada depicts Her sitting on a Lotus mounted on top of a Crocodile(Makar). She is portrayed with four hands and Her upper right hand is raised in Abhaya mudra, the blessing posture. In Her left upper arm She holds a Kalash with a coconut and mango leaves kept on top of it. In Her lower left hand She holds a Shivling and a Trishul(Trident) is held in Her right lower hand.

When is Narmada Jayanti celebrated? Puja Date and Time 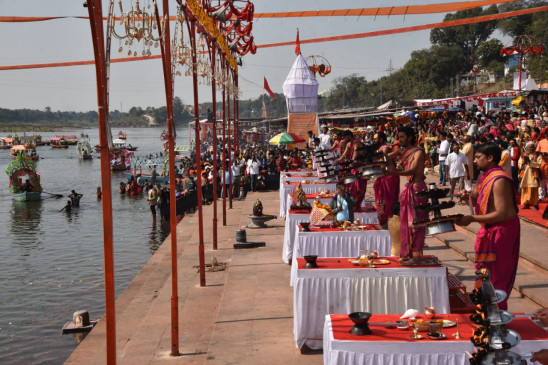 Narmada Jayanti event, celebrated in the Shukla Paksha Saptami of Magh month is chiefly held in the city of Amarkantak, located in the Maikal mountain range of Madhya Pradesh, which is the origin of Narmada river. The Narmada Jayanti celebration in Amarkantak is spectacular on this day. The Narmada Jayanti decoration of the city of Amarkantak makes it look divinely vibrant. Saffron colour is painted all over town, pilgrims throng the banks of the Narmada, take a bath in its purifying water, especially in the morning hours. They worship Maa Narmada and thank Her by offering flowers, ghee/oil lamps. Sadhus, Rishis, sages, gather to perform Homam, devotees gather in the numerous ‘ghats’ of Narmada river to sing Bhajans or hymns of praise to Narmada Maa and of Lord Shiva. Some devotees make diyas of wheat flour dough and offer to the benevolently flowing Narmada river.

In the evening a Maha Aarti of Narmadaji is performed by priests on the banks of the river, which creates a divine atmosphere, with thousands of pilgrims witnessing it and seeking the blessings of prosperity, good health and wellbeing. Not only in Amarkantak, but in the various towns and cities on the banks of the whole length of the Narmada river, the Narmada Jayanti utsav is celebrated with fervour. In fact, from Amarkantak to the Gulf of Cambay, where it flows out to the Arabian sea, there are numerous temples and pilgrim places dotting the banks. The famous Omkareshwar temple, one of the 12 Jyotirlinga temples, is situated on its shores, and is a popular pilgrim destination. There are other temples like, Kuber Bhandari temple (an ancient Shiva temple), the artistically carved Nemawar Siddeshwar Mandir and other temples. 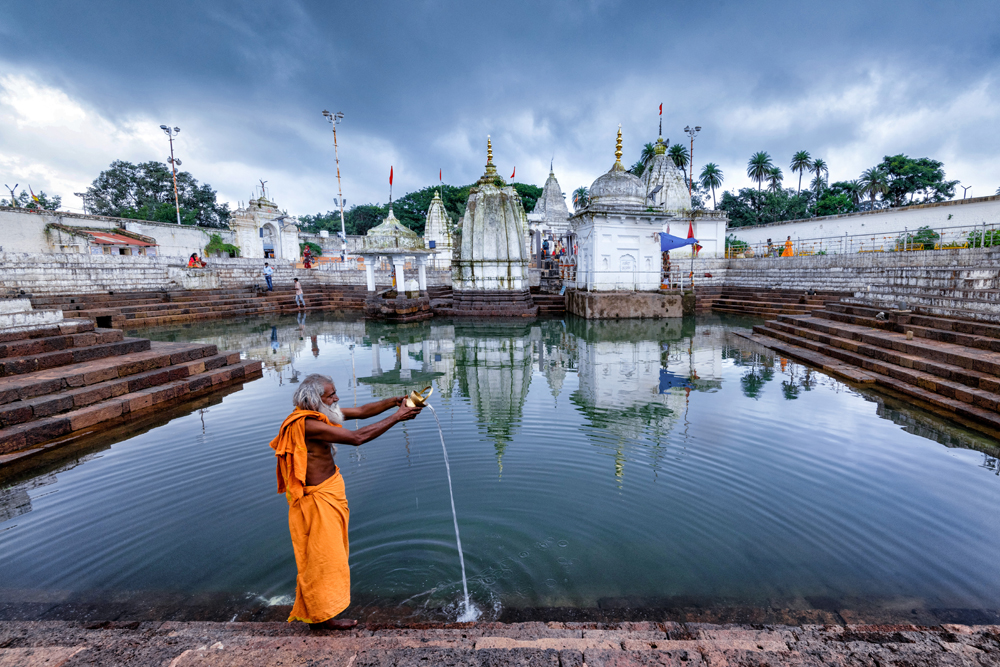 The festival of Narmada Jayanti is to celebrate the birth of Narmada river and is a day to worship Her. Ancient texts say that the mere sight or “Darshan” of river Narmada is pious and has purifying effect. Taking a dip in Her pure water on Narmada Jayanti is said to alleviate sins of devotees, and venerating Her, bestows blessings of peace, prosperity and happiness. The main Narmada Jayanti importance is that devotees take a dip in the river on this auspicious day to liberate themselves from sins. Since Ratha Saptami also falls on the same day, it makes the day of Narmada Jayanti very powerful.

Goddess Narmada is considered Lord Shiva’s daughter and legend has it that when She descended on earth or took birth on earth, on the command of Lord Shiva, She had asked the divine Lord for some boons. The boons were; Narmada would not be destroyed in any condition or situation, even if the earth faced “Pralay” (holocaust situation). Every stone found in the shape of Shivlinga in the river would be worshipped without doing “Pranprathishta”(consecration). Gods and Goddesses should reside on the banks of the river. Lord Shiva granted Her the boons, and is said to have also blessed Her saying that even seeing Her will purify devotees of sins. As per the Skanda Puranas, river Narmada remained stable even in “Pralay”. The natural Shivling shaped stones called Narmada linga and Bana linga, found in the river Narmada are worshipped without performing the ritualistic “Pranprathishta”. The self manifested Narmada linga has the highest vibration among all stones that exist on earth and is the best Shivlinga to worship. The numerous temples and pilgrim places on the banks of Narmada are residents of Gods and Goddesses.

It is believed that performing Shradh, Pitru Tarpan, Pind Daan in any place on the banks of Narmada blesses the person with merits which are Akshaya(indestructible), as Narmada has also been described as the daughter of ancestors in the Vayu Purana. Her banks have places of meditation for Sanyasis (ascetics), since ancient times and therefore She is also called Tapomayi. Respected Rishis, like Rishi Markandeya, Kapil Muni, Rishi Valmiki, and other Rishis had their “Ashram” on the banks of the sacred river Narmada. The Puranas profusely praise Narmada river as one of the most pious rivers, which further adds to the Narmada Jayanti importance and celebrations and the benefits of worshipping Her.

Pilgrims participate in the popular Narmada Parikrama, which means, to circumambulating river Narmada. It is one of its kind as the Parikrama of no other sacred river is done. The Parikrama starts from the origin at Amarkantak and continues down the length of the Narmada river, with beautiful temples and other pilgrim places and ghats. The Parikrama can be started from any of the places on the banks of the river, but a full circle has to be completed and the devotee has to return back to the place where he/she started the Parikrama. Devotees, Sadhus willingly participate in the Narmada Parikrama, and though a daunting task but some devotees travel on foot covering the entire distance of the Parikrama. Narmada Parikrama is considered highly meritorious and blesses with spiritual rewards.

There are different versions of Narmada Jayanti stories. One version about the birth of Narmada river says that Lord Brahma shed tears which gave birth to the Narmada and Brahmaputra rivers.

The most accepted legend of Narmada Jayanti is about Lord Shiva. It narrates that once when Lord Shiva was in intense meditation, His perspiration collected and later flowed as river Narmada. In another version of the story, it says, Lord Shiva went into a state of trance while sitting in Amarkantak(origin of Narmada river) and an enchanting female form was birthed by Him in the trance state. It says that it evoked feelings of tenderness in Him when He saw the beautiful female form He created and thus named Her Narmada, from the Sanskrit word “Namra”. As the daughter of Shiva, She is also Shankari and was extremely beautiful.

There is another story about the birth of Narmada Devi on earth. King Pururava once sensed that the Tarpan he was doing for ancestors were not successful. He remembered that some holy sages had told Him about the purity and power of Narmada Devi and had asked him to bring Narmada river on earth, as She can cleanse and purify the whole earth and mankind. He did austere penance to please Lord Shiva. When Lord Shiva asked Pururava to ask for a wish, Pururava asked for descent of Narmada on earth to help in liberating humankind. Lord Shiva then instructed Narmada to flow on earth. Narmada Maa agreed and Paryank (the son of Vindyachal mountains) agreed to be the base to hold Her descent. It is said that the earth was flooded with the water of river Narmada initially. Then on the request of Devas, Narmada gathered Herself and reduced Her size. She asked King Pururava to perform Pitru Tarpan in Her water, and the King did so, which liberated he souls of his ancestors.

As described in the Puranas, Devi Narmada was mesmerising in her beauty and many Devas and Celestial beings wanted Her touch but She always eluded them, and was untouched and maintained Her chastity. Legend has it that Lord Shiva got Her married to Purukutsu, who was a form of Lord Varuna.

As pure as She is, it is said that even Goddess Ganga, the personification of the sacred river Ganga, takes a dip in Narmada river. Stories in Madhya Pradesh say that Ganga Maiyya, in the form of a black cow comes to take a dip in the river.

Taking a bath or dip in the Narmada river on the auspicious occasion of Narmada Jayanti is said to alleviate sins of devotees.