One of the most unique and Divine Astrological Yantra is the Navgrah/Navagraha Yantra. It is the only Yantra that houses all the Nine Planets. The term Navgraha is a combination of two words, 'Nav' meaning Nine and 'Graha' meaning the Planets which hold prime importance in Vedic Astrology. Since ancient times Yantras have been used to attract positive energies of different kinds and of God bodies. These are powerful sacred geometry which can energize the place it is kept in, amplify the positive energies and induce good vibrations which benefit the people.

The Navgraha Yantra is a sacred instrument and the most powerful among all other Planetary or Astrological Yantras as it carries the combined powers of all the Nine Planets. The magnificent Navgrah Yantra benefits by relieving from malefic effects, Doshas of planets and on installing and worshipping, bestow the blessings of all the Planets, or their respective deities. It enhances the effect of well placed or strong planets in the birth chart. Navgrah Shanti Yantra can be installed at homes or workplace by anyone, irrespective of religion, caste and nationality. To get the maximum benefits it should be placed in the suitable direction of the space, in which it is to be ideally kept and worshipped. The sacred Mandala or geometry of the nine deities or Planets ward off negative energies and bring in positive energies of abundance, happiness, good health and peace.

If there is the weak placement of planets in the Kundli/birth-chart of a native, this Yantra is apt as it helps to correct that by enhancing the power of the weak planets and also the other planets, in the natal chart of the native, thereby protecting from the malefic effects of the planet. 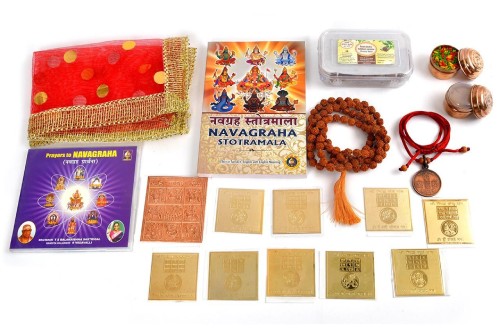 The Planetary Yantra Kit is an assembly of Yantras of each of the Nine Planets, Navgraha Shanti Locket, all the ingredients to worship the Yantras, Rudraksha Mala etc., packed in an attractive box. By worshipping the 9 Planets, the individual gets relief from malefic effects of the Planets, brings good health, prosperity, peace and positive energies of the Planets. This kit makes life positive and easy for those who have afflicted Planets in their Birth-chart/Kundli as per Vedic Astrology. 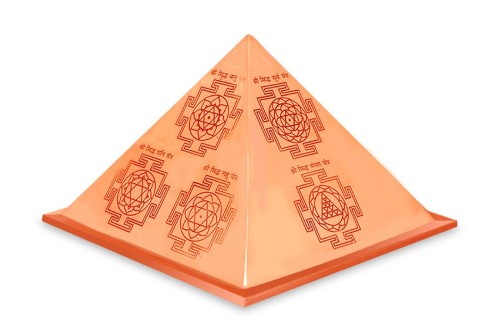 A pure Copper Pyramid with Yantra of each of the 9 Planets etched neatly on the 3 sides of the Pyramid. This powerful Navgraha Yantra Pyramid when installed at home/office eliminates ill-effects of malefic Planetary Placement in Kundli of the individual and receive beneficial blessings of the Planets. The Pyramid is known to spread positive energies in the place of instalment and corrects Vastu Dosha effectively. 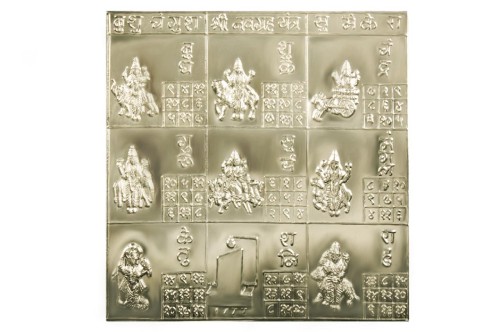 A powerful Pure Silver Shri Navgraha Yantra, with the Yantras of each of the Nine Planets inscribed in 9 squares. When worshipped it enhances the power of well-placed Planets in your Horoscope and eliminates malefic effects of weakly placed Planets. A useful Yantra for everyone as it does the necessary corrections to bring in good health, prosperity, success, peace and abundance. The Yantras are pre-energised. Install it in your home/workspace to gain the benefits bestowed by the Planets. 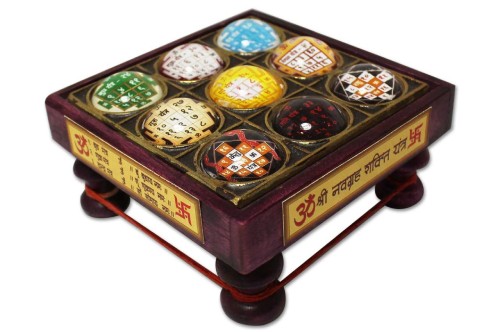 This Navgraha Yantra has the Yantras of the Nine Planets together, made in Brass, with concave glass covering each. This Yantra is a harbinger of good fortune and prosperity. Worshipping it removes ill-effects of unfavourably placed Planets in a person's Birth chart, enhances the power of the well-placed Planers. It appeases the Planets and brings success, good health, wealth, harmonious relationships, protection and blessings of the Deities of the Planets. Install the Yantra at home or altar for abundant energies

Design and Material of Navgraha Yantra 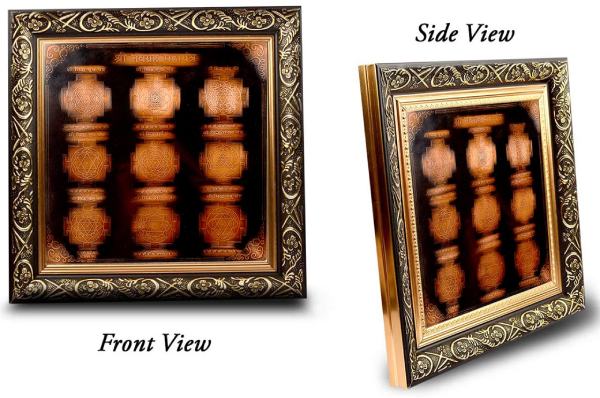 The Navagraha Yantra is mostly made of the thick Copper metal plate on which the Yantra of the Nine planets is etched or inscribed. The Shree Navgrah Yantra has nine small squares, each of which has certain numbers engraved or embossed on it that are arranged in a symmetric manner that resonates with the powers and positive frequencies of all these Planets. These numbers are in alignment with the Planet to which that particular square belongs. The numbers of each planet in their particular square of the Navagraha Yantra, make a mathematical design and interestingly, no matter whichever way you add the numbers, whether vertically, diagonally or horizontally, the sum total of the numbers remains constant.

Can We Keep Navagraha Yantra at Home

To live a happy favourable life, installing the auspicious Navgrah Yantra at home is a good idea as every individual has weakly positioned planets in their Horoscope. It is very common to place the 9 Graha Yantra at home. The direction of placement of the Yantra at home is of the utmost importance. Generally, the Navgraha Yantra is not placed in the Puja altar. It can also be worn by an individual as an ornament or amulet, besides being installed at home, office, shop. It is recommended that everyone should place a Navagraha Yantra at home and take advantage of this Yantra benefit.

Navagraha Yantra pooja is beneficial and worshipping by reciting the Navagraha Mantra or the Shree Navgrah Chalisa appeases all the planets and attracts the principles of the nine planets, ushering in blessings of good fortune, health, positivity, courage, healing of various aspects, the courage to face challenges and overcome them easily and with abundance.

Meditating on the Navgrah Yantra helps to be one with and align with the energy of the Nine Planets. To meditate on the Navgraha Yantra, install the Yantra in your eye level and focus on it. The mystical geometry, when meditated upon, has also supported to gain balance mentally and connects with the energy present of the Divine, in the macrocosm. It can be said that the Navgrah Yantra gives double benefits when meditated on as we are focused on connecting with the cosmic energies.

How Does the Navgrah (Navagraha Yantra) work?

While meditating on the Yantra when you focus at the centre of a Yantra, your mind is elevated into the creative force of the cosmic energies which flows through the Yantra. Similarly meditating on this Yantra, has its own beneficial effect related to the positive vibrations of the Nine Planets.

The Navgrah Shanti Yantra should be energized before installing:

Placement of the Navagraha Yantra in the appropriate direction helps to get optimum Navgrah Yantra benefits. A Yantra has the power to emanate positive energies and energizes the location where it is installed. You may place it near the entrance of your home/office/shop or in your living room, reception, study room or office cabin. You may keep it on a table or use it as a wall hanging. It works great when placed in the East direction facing West. It gets energised by the rising rays of the Sun and with the divine vibrations of the East corner provides positive transformation energies to the dwelling through its mystical geometry. The vibrations of the Yantra will create an aura of positive energy around you and all the inmates of the place.

Yantra is excellent in establishing high resonance cosmic energies. This helps to connect with the supreme energies and entities that guide us to a spiritual way of living, conduct and understanding. It activates the spiritual self in an individual.

In Vedic astrology, Navagraha (nine planets) are some of the major planetary influencers in each individual's life. They consist of nine planets namely, the Sun, Moon, Jupiter, Mars, Mercury, Venus, Saturn, Rahu (north node) and Ketu (south node). According to Vedic astrology, good and bad karmas, supernatural and spiritual influences are represented by the planets. Their position in your Kundli/Horoscope is like a blueprint of the Karmas which we are to go through in life. The Navgrah Yantra effectively eliminates the negative effects of Planets and blessings of the deities of each planet flows when the Navagraha Yantra is worshipped.

Sun: Being the principal planet, Sun (‘Surya’ in Sanskrit) is the solar deity. Puranas describe the image of Sun having the celestial body of Gold along with His chariot pulled by the Seven Divine horses. These horses represent the seven chakras or energy centres of the body.

Moon: Chandra in Sanskrit, Moon as Vedas describe, is called Soma. He is youthful, fine-looking, and blond with His two arms. He holds a club and a lotus. It is said that he moves across the sky by His divine chariot. He represents the mind and the Motherhood.

Mars(Mangal): This planet is under the sovereignty of Bhauma, who is the son of Bhumi, the Mother Earth. Since ages, Bhuma has been regarded as the Lord of war and fights and a planet which rules over Aries and Scorpio.

Mercury(Budha): Mangala is the Lord of planet Mercury as well as the son of Moon. He is the God of merchandise and guardian of tradesmen.

Jupiter: Called ‘Guru’ in Sanskrit, Jupiter is the spiritual leader of demigods. He is the epitome of piety, morality and spirituality. He is in the mode of goodness standing for knowledge and teaching. His energies are expansive.

Venus: Venus is also called ‘Shukra’ in Sanskrit. He is the son of Sage Bhrigu and Ushana and also the teacher of the Daityas. Asuras, the wicked ones, find their refuge at the feet of Venus. Planet Venus stands for wealth, bliss, pleasure, luxuries, fertility and reproduction.

Saturn: Shani, Saturn, is one of the nine most important Divine beings in Vedic Astrology. He is the son of Sun. He is in the mode of ‘tamas’—ignorance. Saturn is best known for afflicting agonies as well as fulfilling any desires after a long struggle.

Rahu: He represents the upper part (head) of the evil-minded Snake that gulps down the Sun or the Moon, creating an eclipse. Rahu-Kaal-the period of Rahu, in general causes chaos in one’s life as its influence as per Vedic Astrology is considered inauspicious.

Ketu: He represents the rear part (tail) of the evil-minded Snake. He leaves a colossal impact on one’s life as well as it rewards the native beyond their expectation.

The renowned Navagraha Yantra has high powers to heal many aspects as it is directly associated with the nine Planets as per Vedic Astrology. The Planets and their position in the Kundli or birth chart affect our life and therefore weak placements of Planets have its ill-effects on the native. Installing this Yantra and worshipping it, meditating on it, brings in its benefits. 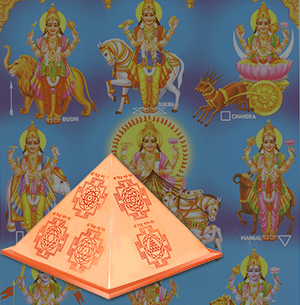 How to make Navgrah Yantra?

Things you will need- The twig/small branch of the Pomegranate tree which has to be sharpened like a Pen at the end, Ashwagandha, square-shaped Bhojpatra, Ganges water or Gangajal.