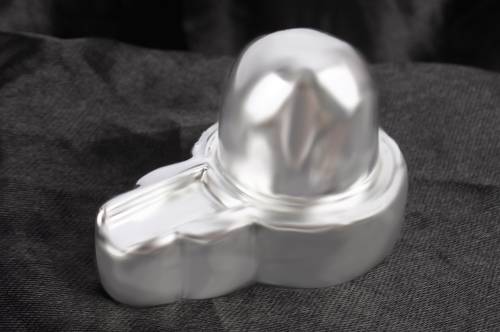 Parad Shiv Ling also referred to as Rasalingam in the South is the Shiv Linga that is made of the Parad metal. The Parad Shivlinga is one of the most auspicious and divine creations that has been created and revered by man since ancient times. It holds the powerful and mystic dual energies of Shiv Linga and the metal Parad. Worshipping a Parad Shiv Linga with pure devotion is said to fill the devotee’s life with many boons while also creating a protective shield around him/her. The Shivling made of Parad finds mention in the ancient Holy Scriptures. 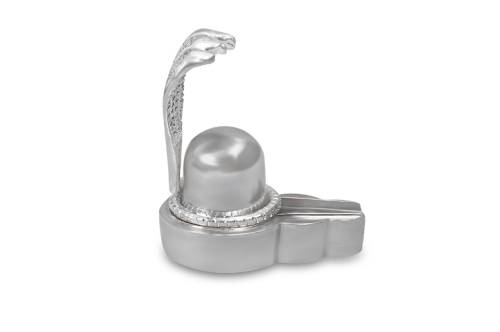 Parad Shivalinga is a Shivling made of solidified alchemical Parad (mercury) which is considered to be the purest metal. This Shivling is worshipped to seek the blessings of Lord Shiva and you can get variants of this lingam at Rudra Centre. The Parad Shivalingam is available in various sizes. It can be placed in your home or at the temple and it has to be handled carefully. The devotees are blessed with longevity and spiritual upliftment as they worship the Parad Shivalingam regularly and perform Abhishek.

Brass Yoni base with Narmada Shivling 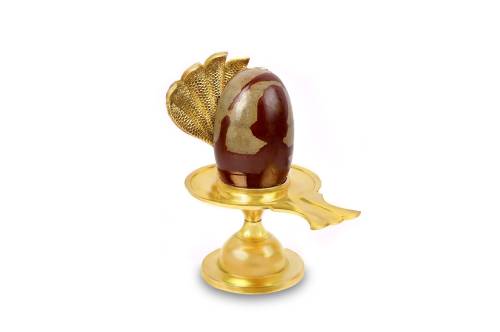 CLICK HERE TO Buy Brass Yoni base with Narmada Shivling 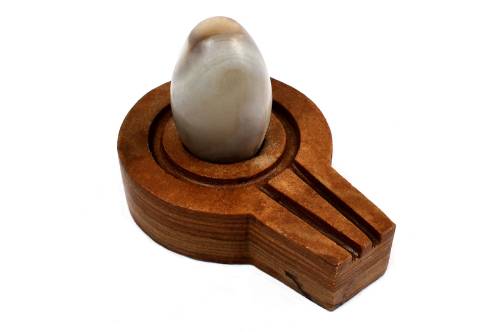 Banalingam resting on Stone Yoni base looks beautiful and there are a variety of designs at Rudra Centre. The Banalingam is known for its natural Svayambhu form which means it originates on its own. This lingam has the power to bring the blessings of Lord Shiva and it has to be worshipped regularly. The Yoni base is also carved on the stones found in the Narmada river. Every design is unique and the Banalingam should be placed according to the direction suggested by the experts. 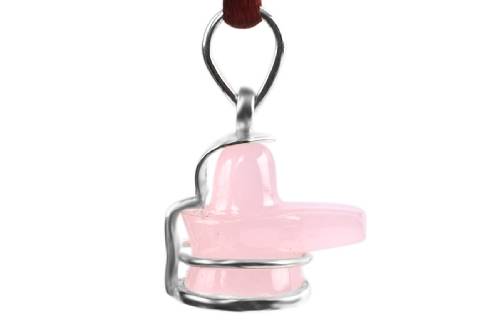 Shivalingam Lockets made with the original gemstones look absolutely stunning. The pendants are carved very elegantly and their light weight & compact size make them convenient for wearing every day. Symbolic of the unified power of Lord Shiva and Goddess Shakti, the Shiva lingam carries the blessings of Lord Shiva. The wearer experiences improvement in overall health and peace. Different gemstones possess different qualities and hence, the wearer gets the benefits of both Shivalingam as well as the gemstone.


About Shivlingam and Parad

Worshipping the Parad Shivlinga is like worshipping Lord Shiva Himself. Parad is a metal which is known to be the sperm of Lord Shiva whereas; Shiv Ling on the other hand is the formless avatar of Lord Shiv which appeared in the form of a huge pillar that stood so tall that it surpassed all the heavens (the skies) and its beginning or the top surface could not be found. Similarly, it was rooted so deep in the earth that its base could not be found. It is said that Parad Shiva Lingam is a symbolic representation of Lord Shiva-the divine. A person possessing a Parad Shiv Ling which is energized by Mantras and blessed by a Pundit or a Guru is sure to invite good fortune, great luck, and overall bliss in his life.

Significance of Parad Shiva Lingam as mentioned in the Holy Scriptures

Shiva Ling as mentioned in the Ras Maartand

Brahma-hatyaa Sahastraanni Gohatyaa Shataani Cha.Tatshannaadwilayam Yaanti Raslingasya Darshanaat, Sparshnaapraapyate Muktiriti Satyam Shivoditam||
Translation of the above text in English
A million times more fruitful is worshipping a Parad Shivaling than worshipping a thousand Shiva Lingas. Just looking at a Parad Shivaling neutralizes the effect of the sin of killing a thousand Brahmins and cows. Touching a Parad Shivaling, without doubt, makes one free of all problems and quickens one's spiritual progress. These are the words of none other than Lord Shiva.

Shiva Ling as mentioned in the Rasaarnnav Tantra

Shiva Ling as mentioned in the Brahmaveivart Puraan clearly states

Shiva Ling as mentioned in the text of Vaayveeya Samhita

||Aayuraarogyameishvarya Yachchaanyadapi Vaanchhitam.
Raslingaarchanaadishtam Sarvatam Labhate Narah||
Translation of the above text in English
Longevity, good health, prosperity, and all desired achievements can be had through the worship of Parad Shivaling.

Significance of a Parad Shivalinga in Tantra:

All the metals and sub-metals found in the world are sending out their waves. Parad (mercury) is metal too and sends out its waves likewise. As parad is the most unstable among all metals, similarly man's mind is the most wavering too. Both are closely related. If parad is stabilized by destroying its unsteadiness, its waves will solidify. This process causes an effect on the mind. If one meditates beside a parad Shivalinga, the mind naturally gets concentrated. Therefore, a compact form of parad is of great significance because it is extremely helpful in concentrating the mind.

Now, that we have read about what is stated about the Parad Shivlingam in the Holy texts, let us now learn How to Keep Shivlinga at Home.

How to install Shivlinga at Home: Direction of Placement of Shiva Linga

Placement of spiritual objects at home must be always done carefully. You can either approach a Vastu expert or you can consult the experts who deal in these things or even a learned Pundit. Placement of the spiritual items including the powerful Shiv Ling in the correct direction always plays a key role in availing the benefits these divine objects offer.

A Parad Shiv ling is one of the purest and powerful manifestations of Lord Shiva which as mentioned earlier offers benefits and possesses divine energies. According to the Agama Shastra, there are two appropriate and the only ways of installing a Shiva Ling in the puja altar of the house, These steps are as follows

How to worship a Parad Shiv Ling at home

Get up in the morning; clean yourself by taking a shower. Now prepare a bowl of clean water, another bowl of pure milk and a bowl of rose water, a bowl of curd, a bowl of jaggery, and a bowl of honey and Keep aside. Now take Bel leaves and keep aside for the worship of the Shiv Ling. Now let us understand the procedure of worshipping a Shiv Ling. First, light an oil diya and burn some incense sticks. Once this is done perform the activity of Holy bathing or Abhishekam of the Parad Shiv Ling with jaggery, then honey, then pour curd, then milk, then pour plain water on the Shiva Lingam until clean. In the case of a small puja altar, you can perform the Abhishekam by simply pouring milk and water. Now show diya to the Shiv Ling and offer fumes of the incense sticks to the Shiv Ling. Now place a Bel Patra or a Bel leaf over the Shiv Ling and chant the mantra of Lord Shiva. Apply Vibuthi, sandal paste and then saffron on the Shiv Ling and then apply Sandalwood paste and Vibhuti on your forehead. This is how you can worship the Parad Shiv Ling at home. Visiting a Shiva temple on Monday or Thursday or worshipping a Parad Shiv Ling at home especially while observing fast for half day is said to appease Lord Shiva, Goddess Parvati, and Goddess Lakshmi.

Benefits of Worshipping a Parad Shivlinga

When we think about Shiv Ling in general, Lord Shiva appears in our thoughts as we associate Shivaling with Lord Shiva. But did you know that the Parad Shiv Ling is also associated with Goddess Lakshmi? Yes, you read that right! According to the Lakshmi Upanishad which is a Holy text, the Parad Shiv Ling is an emblem or a physical representation of Goddess Lakshmi. Also, according to Lord Vishnu, as mentioned in the Holy Scriptures, a house that has a Parad Shiv Ling installed in its puja altar is surely graced by Lakshmi the Goddess of wealth and prosperity, and that there would never be a scarcity of anything in that house. For instance, a house that has Parad Shiv Ling never runs out of food grains, food, riches in terms of money, and this house is always blessed with peace. One of the most respected and renowned of all Yogis, Gurudev Swami Sachidanand once stated that a Sadhak (seeker) who places a Parad Shivaling in his home and worships it or just glances at it every day is liberated from all his/ her sins and attains divine boons and powers while enjoying all the comforts of material as well as spiritual life.

The largest Mercury Shivalingam in the World was created in Ujjain, India

Siddha Ashram and Acharya Mahamandaleshwara Swami Nardanand Paramahansa Maharaj have completed the construction of a 1500 kilogram Parad (Mercury) Shivalinga, which is the largest of Sanatana Dharma (Hinduism). The Shivalinga and its temple are located at Siddha Ashram, Ujjain, India. The opportunity to have darshan, the touch and worship of this Parad Shivalinga is accredited to one's holy and good deeds done in the previous and present life.

In Hindu scriptures parad (mercury) is regarded as the best of all metals. The following is the purport of a sloka from Rasyog Chintamani: "Sphatik is better than paashan, padmaraaj than sphatik, Kashmir jewel, pushparaj, i.e., lahasunia than Kashmir jewel, panna than lahasunia, Neelam than Panna, godanti or gomed, mauktik than vidrum, silver than diamond, gold than silver, diamond than gold and parad (mercury) is yet better than diamond." Thus parad is the best of all the metals and jewels and a lingam of Lord Shiva made of the best of all the metals should, without doubt, defy any parallel.

Everything around us has the energy and vibrates at a particular frequency. It is not easy to obtain a Parad Shiv Ling and one who gets it is said to be blessed by the heavens and the Supreme. Getting to see a Parad Shiv Ling is believed to be very lucky. Installing a Parad Shiv Ling at your house is considered to be ‘acche bhaag’ good fortune and denotes that the deities are appeased by you. Just by looking or glancing at the Parad Shivalinga is said to liberate an individual from all the past and present life sins. A Siddh Parad Shivaling is prepared through secret rituals and several samskara processes passed on from generations of Vaidyas and Siddhas. At Rudra Centre, you would find the true alchemical Siddha Parad lingam.