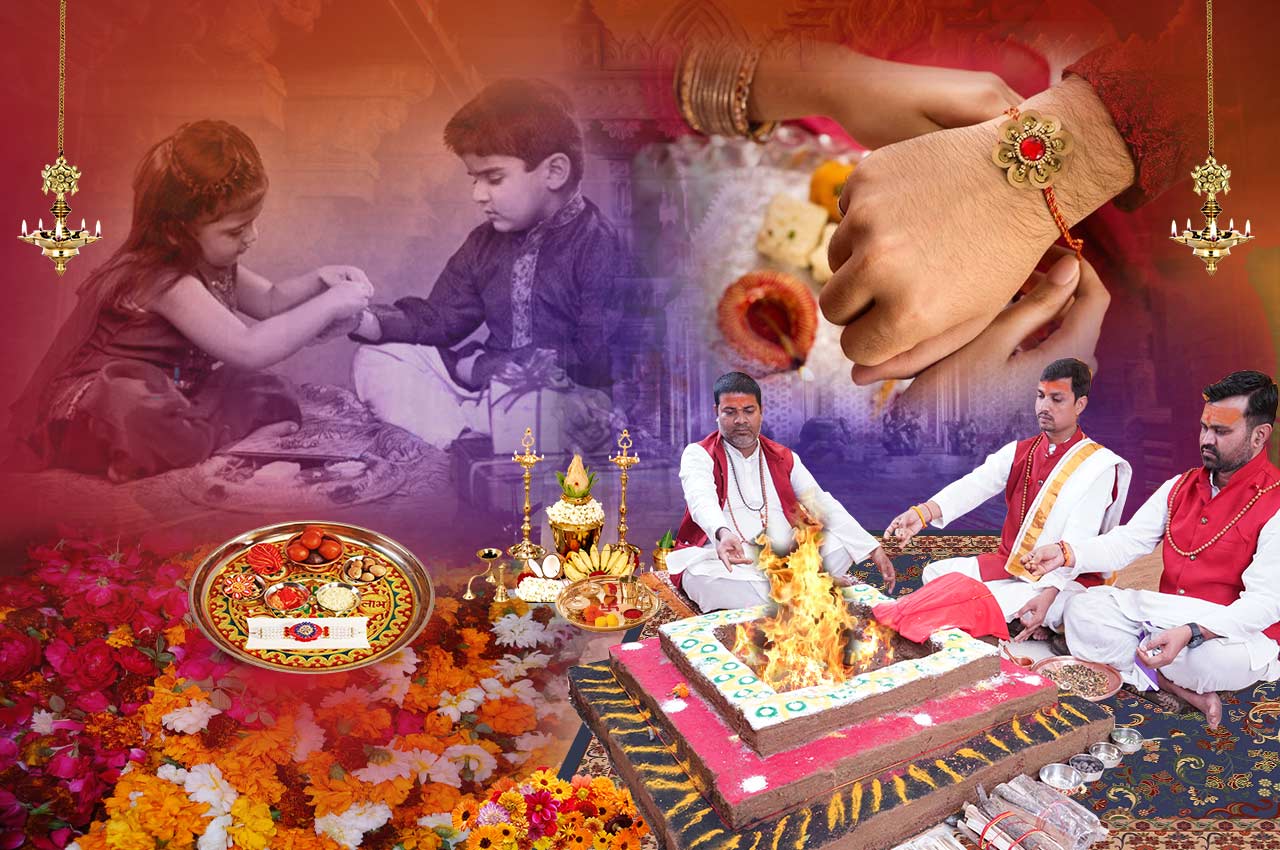 India, a country that beholds rich history and culture, is the land that is known to celebrate and cherish pivotal events. These events form the most golden chapters of our history that we refer to as festivals. Occurred in different eras, our festivals are not just events but they are pedagogues that teach us significant lessons. They help us to stay close to our roots and to our culture. One such significant and most celebrated and most awaited festival that is celebrated across the nation is ‘Raksha Bandhan’.

Now, that we know what Raksha Bandhan is let us take a look at the origin of this sacred Rakhi festival

What is Raksha Bandhan (Meaning) Raksha Bandhan also known Rakhi Purnima, is a festival that falls in the Holy month of Shravana (July/August) on the auspicious day of Full Moon also known as Shravan Poornima. It is a popular ceremony in Hinduism where a sister ties a Holy thread known as Rakhi on the wrist of her brother symbolising the strong bond between siblings. Rakhi Purnima denotes caring and safeguarding. In Sanskrit, the word ‘Raksha’ means ‘protection’ and the word ‘Bandhan’ means ‘bond’. Thus, Raksha Bandhan is an auspicious Hindu festival which is celebrated since ancient times. It is the most symbolic interpretation of the most pure bond of love and togetherness between siblings.

Vidhi of Raksha Bandhan: How is Rakhi Purnima celebrated? 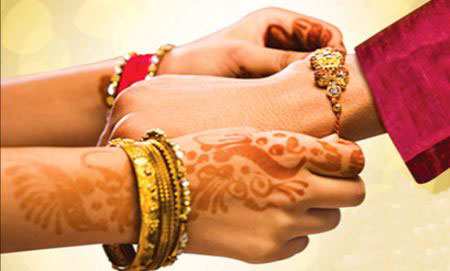 As per the age old traditions on the Raksha Bandhan day, the sister ties a sacred thread known as ‘Rakhi’ on the wrist of her brother and prays for his good health, happiness and success in all walks of life and in return the brother pledges to protect and guide his sister through every thick and thins of her life for the rest of his life. If the sister is younger to the brother, she touches his feet’s and seeks his blessings on which her brother blesses her and offers gifts and sweets and vice-versa. Thus, the vidhi of Raksha Bandhan is performed.

Detailed Vidhi of how to celebrate Raksha Bandhan?

During the rakhi festival women buy Rakhis from market or some of them design and create personalized Rakhis at home for their brothers. Rakhis vary in terms of designs; some are simple, some are heavily decorated while others are spiritual such as Rudraksha Rakhis. On Raksha Bandhan, the family members prepare for the rituals early in the morning and brothers and sisters dress up nicely. 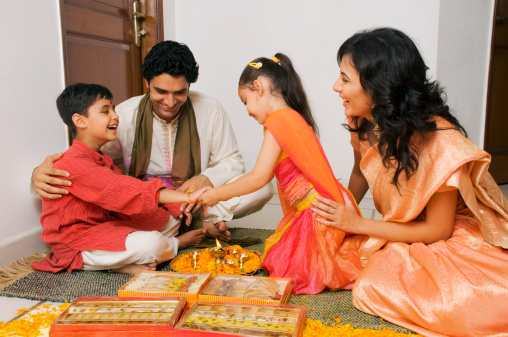 For brothers:
After your sister ties Rakhi and finishes the ritual, offer her your blessings with gifts, cash and promise her all the protection and support even after her marriage. 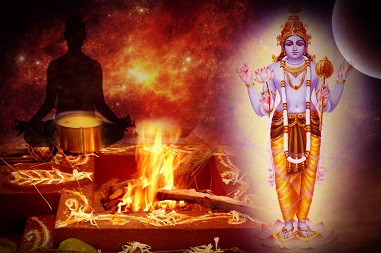 Performing Ayush Homam on Raksha Bandhan is highly auspicious for the family. It is performed to get blessings from Ayur Devta, the God of life. By performing this homa, one can be able to ensure a healthy and long living life. You can perform it on the birthdays based on the stars. Those who want to get relief from mental and physical health problems can organize Ayush homa for living a better life.

Puja for Good Luck and Fortune 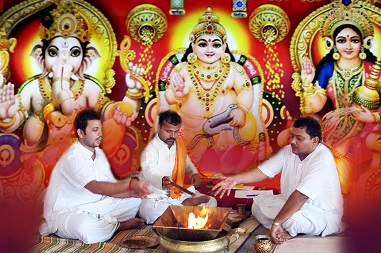 You can also get Puja for Good Luck and Fortune performed on Raksha Bandhan. It attracts auspiciousness and abundance into your life. In this Puja all the deities associated with fortune, wealth, obstacles removal and aiding work and business are worshipped. Blessings from Lord Ganesha, Goddess Lakshmi and Lakshmi Kuber ensure removal of obstacles, profitability and increase in materialistic possessions.

CLICK HERE TO BOOK Puja for Good Luck and Fortune →

There are numerous old legends related with the history of Raksha Bandhan and its celebrations. Various Vedic sacred texts, for example, Puranas, Bhagvat Purana (Srimad Bhagvatam), Mahabharata and such illuminate you with stories that talk about the beautiful and strong bond of love, care and protection between brothers and sisters.

Puranas mention an ancient story about a ghastly war between the thunder god Indra and the demonic king Bali who administered his leadership across the earth. Lord Vishnu offered a divine thread to Indra's wife Sachi who tied it on Indra's wrist. This made him win Amaravati, the place taken over by Bali. However, this story reveals the deeper power of a holy thread and the ceremony of Raksha Bandhan which was beyond the relationship between brothers and sisters. In the Bhagvat Purana, it is mentioned that King Bali unable to defeat Lord Vishnu surrendered unto His lotus feet and requested Him to reside at his place. Goddess Lakshmi was upset seeing the Lord accepting a request from a demonic mind (Bali) as She did not like King Bali for he was a demon. She tied a holy thread on Bali's wrist and wished that he protect Her as a brother. King Bali gladly accepted Her as his sister and asked Her to wish anything that pleased Her. She without a second thought asked for the Lord and requested His presence in Her abode. King Bali without fail fulfilled Her wish. This is how Raksha Bandhan festival came into being. In the epic Mahabharata, Lord Krishna while fighting and killing Shishupal got a cut on His finger. Draupadi immediately ripped a piece of her sari and covered the cut by tying it around the finger. Pleased with her action full of devotion, the Lord promised to reciprocate. When she was left at stake by her husbands, the Pandavas in a gamble against the Kauravas who decide to strip her naked, she prayed to Lord Krishna for help. The Lord protected her chastity by supply cloth to her sari that never ended while being taken off her body. This is how the Lord became her brother and people started observing Raksha Bandhan on the auspicious Full Moon Day.

According to the famous Raksha Bandhan story, Goddess Yamuna always tied a sacred thread on Lord Yama's (God of death) wrist on the tithe of Shravana Purnima. Pleased by this custom, Lord Yama announced that any man who has a ‘rakhi’ tied on his wrist by his sister would be saved and he would become immortal. Thus, the tradition of tying Rakhi on the wrist of the brother has been practiced across the nations and across religions.

Why Raksha Bandhan is celebrated?

Raksha Bandhan is a festival that celebrates the unconditional bond of love, protection and care between brother and sister. It is celebrated to cherish this bond and to restore the love each has for one another. Our rich culture and history thus form a ground of evidence that even in the past people came closer and bonded as brother and sister through this simple yet powerful ceremony of Raksha Bandhan.

Rakhi Muhurat means the time to perform the Thread Ceremony which is, to tie the Rakhi on the wrist of your brother. Time plays a significant role as per Hindu calendar. Certain time period is considered as auspicious and certain inauspicious. Hence performing the Rakhi ceremony as per the Rakhsha Bandhan subh Muhurat is important.

Aparahna (late afternoon) is considered as the best time during the Raksha Bandhan day to perform the thread ceremony or the tying of Rakhi. If Aparahna time is not available then Pradosh time is also suitable to perform rituals related to Raksha Bandhan.

Make sure you do not perform the ceremony of Rakhi purnima during the Bhadra period. Bhadra is considered to be inauspicious time.

During the first half of Purnima Tithi, the Bhadra tithi prevails. Therefore, it is advisable to wait for Bhadra to get over before performing the auspicious ceremony of Raksha Bandhan.Thus, the Raksha Bandhan day is a much awaited day by the sisters as they are showered with gifts and a promise to be protected by their brothers and like.