Rudraksha as found in Nature

Rudraksha beads are a plant product, containing carbon, hydrogen, nitrogen, oxygen and trace elements in combined form. The percentage compositions of their gaseous elements were determined by C-H-N Analyzer and by Gaschromatography. The result shows that Rudraksha beads consist of 50.031 % carbon, 0.95% nitrogen, 17.897% hydrogen and 30.53% oxygen.

Rudraksha is a large evergreen broad-leaved tree. Its scientific name being Elaeocarpus ganitrus, the family is tiliaceae. Altitude-wise, its habitat starts from sea-coast and goes up to 2,000 meters. Geographically it is found growing naturally and abundantly in tropical and subtropical areas. The trees are perennial in habitat. The trees are almost 50ft to 200ft in height. According to old mythology " Siva Purana" that the favourites of Lord Shiva , Rudraksha trees grow in Gouda Land which in present era is the area of the Gangetic Plain on the southern border area of Asia to the foothills of great Himalaya and middle area of Nepal. Thus, starting from Manila, passing through Myanmar, plains as well as low hills, its habitat extends to Bengal, Assam and adjoining north-eastern states, Bangladesh, Bhutan, Nepal .In present era Rudraksha trees are basically localized in Nepal and the southern part of Asia. Although Rudraksha are grown and found in Nepal but these are mainly localized to eastern part of Nepal due to climatic suitability. 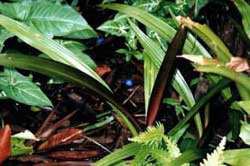 Rudraksha Plant Elaeocarpus is a large genius of evergreen trees. It has nearly 36 sister species, including Rudraksha. The main trunk of rudraksha tree is cylindrical. Its section is circular. Bark is greyish white and rough in texture with small vertical lenticels and narrow horizontal furrows. The branches of Rudraksha spread in all directions in such a way that when growing in natural habitat, the crown takes the shape of a pyramid. The leaves of rudraksha are shining green above and dull coriaceous below. The flowers are ovoid, conical, elongate, nearly 1 to 2 cm in diameter. These appear in April-May. The fruit is globose and drupaceous having a fleshy exterior. The beads inside is hard and tubercle. The fruit starts appearing in June and ripens by august to October.

Farming of Rudraksha is a difficult process due to its slow sprouting from the beads which usually takes about 1 to 2 years depending on the humidity of soil. Rudraksha is basically grown in subtropical climatic region with temperature ranges from 25 to 30 degree centigrade. Once Rudraksha are planted it starts giving fruit after 7 years and thereafter for long time. In the single tree Rudraksha beads comes in all different faces at the same time but higher mukhis or faces are very rare to find where most of Rudraksha beads are five faces Rudraksha beads come in seasonal pattern every year around mid-august to mid-October from the tree. The Himalayan Beads simply seem to be larger, heavier and more powerful due to the environment they grow in. So it is a certainty that environment and specifically the location of the Rudraksa Trees play a key role in their growth. Rudraksha tree are easy to grow and once established, a rudraksha tree will last for years with a little care.