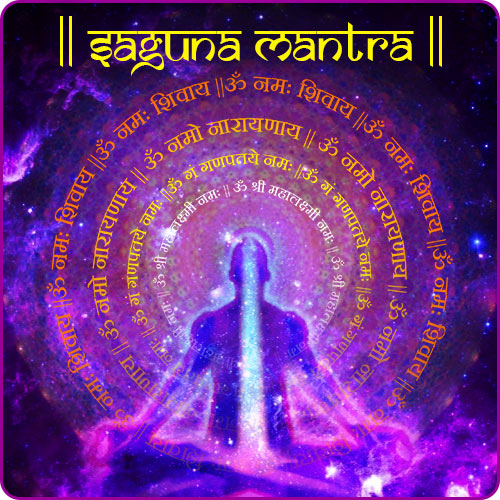 Mantras are Sanskrit-invocations of the Supreme Being. They are reinforced and propelled by japa meditation. After passing through vocals they adjoin the mental and telepathic states, and bring forth pure energy in thoughts. Of all the languages, Sanskrit most closely approaches telepathic language because of its affinity to the fifty primeval sounds. It is the most channelized way to approach the transcendental state.

Mantras cannot be concocted or tailor-made for the individual, despite some current claims. They have always existed in a latent state as sound energies. Just as gravity was discovered but not invented by Newton, Mantras were revealed to the ancient masters. They have been codified in the scriptures and handed down from guru to disciple. Although it is customary for the guru when giving initiation to accept voluntary offerings of fruit, flowers or money, the selling of Mantras is strictly against all spiritual rules.

In the confrontation between the stream and the rock, the stream always wins, not through strength but by perseverance. Thus perseverance will bring the aspirant to the top faster than if he were to spread his energies in exploring all the alternative paths.

Mantras used by spiritual aspirants to achieve God- Realization are called deity Mantras. They are Saguna, with qualities or form producing, and aid the conceptualization process, just as visual symbols does. As one recites the specific deity Mantras, it gives rise to the actual form of that particular deity.

As a specialized sound body of consciousness, the Mantra is the deity itself. The form of the deity manifests as the visible portion of the sound. The Mantra, therefore, must be rendered verbally in a proper way, with attention to the syllables and rhythm. If translated, it ceases to be a Mantra because sound vibrations newly created in translation cannot evoke it. Only the rhythmical vibrations of the Sanskrit syllables properly recited can regulate the unsteady vibrations of the worshipper and permit the form of the deity to arise.

Westerners are prone to think that the various Mantras refer to different Gods, and that there is a wide diversity in the culminating experience. It must never be forgotten that the deities are aspects of the one Divinity whose grandeur is too vast for the mind to comprehend at the beginning of spiritual practice.

To again understand the analogy of the hill, many paths to the top can be viewed as the worship of the various aspects of the God. There might be various pathways but the summit remains the same. After reaching the pinnacle, one will have the vision to encompass the totality. It is not only about reaching at the top but it is about reaching deep within because the depth of the soul gives more clarity and understanding on what this universe is all about.

Every true Mantra fulfills six conditions that are mentioned below:

All devotees worship the same Supreme Atman, theres just one almighty God. The difference lies only in the religious practices & the form of worship. These differences arise from the need for multiplicity in approach to Godhead. Various temperaments are attracted to particular manifestations of the Divine. Some people are drawn by silence, others by activity; some lose themselves in nature, others in intellectual abstractions. One can approach God more easily if there is a compatible relationship with the most suitable manifestation. Harmony between aspirant and chosen deity is essential. However, one can attain the goal only when one can see his chosen deity in all the form deities and in all the living beings.

Every individual has worshipped some deity in previous lives; the impression of this worship is imprinted in the subconscious mind. These impressions have influenced the mental vibrations and have helped to form the particular mentality. Worship of Lord Shiva in previous birth would incline one to Shiva worship in this life too; it would impart certain mental characteristics, such as stoicism and love of solitude. One who chooses Shiva, as his ishta devata would be mostly drawn to abstract forms of thought and meditation as his method of worship.

The householder to whom family, responsibility, order and ideals are important is drawn to Rama, the ideal son, husband and lawgiver. Krishna attracts most people, particularly devotional and active, balanced extroverts who are concerned with the welfare of others. As the mischievous baby, a young man engaged in divine play in the fields and forests of Vrindavan, and inspired giver of the wisdom of the Bhagvad Gita. Those who feel reverence for the Mother aspect as divine universal energy might worship Durga.

Once the deity and appropriate Mantra have been selected, and the aspirant has received initiation, he works with the Mantra until reaching enlightenment. The Mantra becomes his theme song, so to speak. He makes his vibrations his own, and to the extent that he can do this, he is drawn closer to God.  Other deity Mantras can also be used in a supplementary way. Repetition of OM Aim Saraswatyai Namah bestows wisdom, intelligence and creative achievement. OM Sri Maha Lakshmyai Namah confers wealth and prosperity. The Ganesha Mantra removes obstacles in any undertaking.

The Maha Mrityunjaya Mantra prevents accidents, incurable disease and calamities, and bestows longevity and immortality. It is also a moksha Mantra, by which one can attain liberation. Those who do japa of it daily will enjoy health, life-long and attain ultimate enlightenment. The translation of this powerful Mantra is: We bow to the three- eyed Lord (Shiva) who is full of sweet fragrance, who nourishes human beings. May he free me from the bondage of births and deaths, just as the ripe cucumber is separated from the vine, and may I be fixed in immortality.

The Gayatri Mantra is the supreme Mantra of the Vedas. It is one Mantra that can be commonly prescribed for all, for Gayatri is the Mother of the universe, Shakti herself, and there is nothing she cannot do. Her Mantra purifies the mind; destroys pain, sin and ignorance; brings liberation; and bestows health, beauty, strength, vitality, power, intelligence and magnetic aura. Repetition of the Gayatri Mantra, OM Namah Shivaya, OM Namo Narayanaya, or OM Namo Bhagavate Vasudevaya for 125000 times, with feeling, faith, and devotion secures for the devotee the grace of the presiding deity. OM Sri Ramaya Namah and OM Namo Bhagavate Vasudevaya enables one to attain realization of God with attributes first, and subsequently realization without attributes.