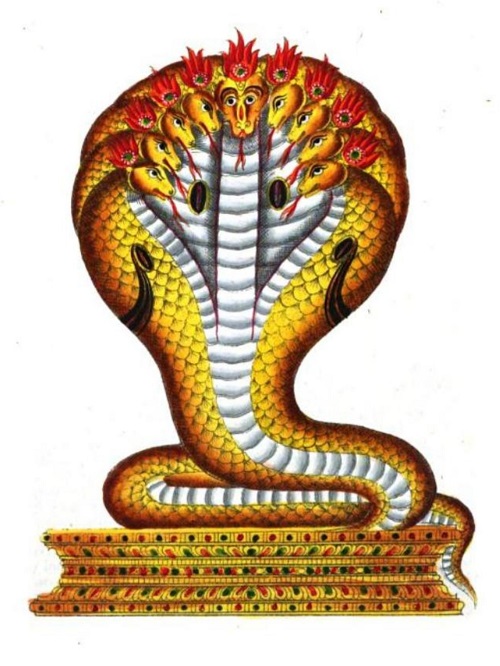 Hindus not only venerate Devtas and Devis but also their Vahanas – the animals or birds, who accompany them at all times. Hinduism also worships the deities’ musical instruments, weapons wielded by them, their grahas and nakshatras associated with them.

Indian folklore is filled with mystical creatures, unwavering curses and captivating tales about the exceptional powers and extraordinary beauty, compassion and kindness of our Gods and Goddesses. Hindu Dharma is also packed with semi-divine deities who are revered by millions of people in the country.

The Naga is a specific race that possesses supernatural divine powers and holds a significant stature in Hindu philosophy, mythology, art, literature and culture. Shesha Naga is a humongous snake who is the Nagaraja or the King of the Naga (snake) race and is believed to be one of the primal beings of creation.

Who is Shesha Naga?

Also referred to as Sheshanaga or Adishesha, Shesha is regarded as the ruler of all Nagas. Whether he is 5-headed or 7-headed or even 1000-headed, it is assumed that all the planets in the universe are housed in their heads. So, every time he moves Earth from one head to another, it is alleged that it causes an earthquake. Shesha Naga is believed to be the one who is accountable for the notion of the gravitational force and makes sure that all planets and stars orbit around each other.

According to Sanskrit texts, ‘Shesha’, particularly those associating with mathematical calculation, suggests the ‘Remainder’ – that which remains when everything else ceases to exist. He is occasionally called ‘Ananta Shesha’ which suggests ‘Endless Shesha’ or ‘First Shesha’. It implies Endless or the Infinite One. This is because Shesha always exists even with all the Pralayas (Great Floods), each of which had kalpas (eons) and yugas (eras) in the past.

According to the Puranas, Shesha Naga is believed to hold all the planets of the universe on his hoods and consistently sings the praises of Lord Vishnu from all his mouths. As per the Bhagavata Purana, Shesha is referred to as ‘Sankarshana’ – the tamasic energy of Lord Narayana.

It is believed that when Adishesha uncoils, time starts to move ahead and creation begins to take place. But when he moves back to his coiled state, time halts and the Universe does not exist.

He is believed to reside deep within the inner layers of patala, where there are several serpents with gems on their heads and where Sankarshana is regarded as the ruler. Shesha Naga is assumed to dwell there even before the universe was created. When the universe is inching towards its end, he produces 11 Rudras from them to annihilate the universe for a new one to be made.

It is assumed that Sankarshana develops himself as Garbhodakshayi-Vishnu in the initial stages of the universe to conceive Brahma. In a nutshell, Lord Sankarshana is believed to be Lord Narayana himself. In a couple of the previous chapters of the Purana, it was also cited that Lord Sankarshana discussed the Bhagavata to the Four Kumaras, who in turn forwarded this lesson of the Bhagavata. At some point, the idea was delivered to sage Maitreya who in his turn mentioned it to Vidura. 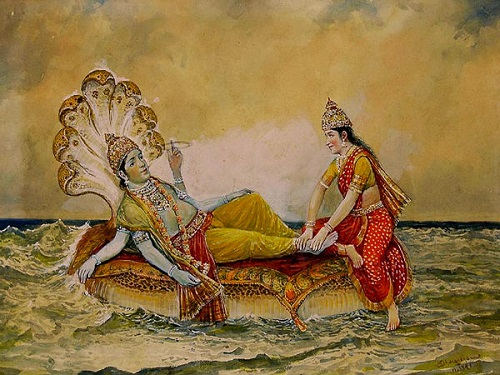 Shesha Naga is typically portrayed as a humongous form that drifts coiled in space or on the ocean of bliss to create the bed on which Lord Vishnu is resting with Lakshmi Devi – the Goddess of Wealth, at his feet. Occasionally, he is demonstrated as a five-headed/ seven-headed/ ten-headed snake.

Shesha Naga is also portrayed as drifting in the ocean of the changing world, where he is the bed for Lord Vishnu. This is because he is renowned as Adishesha (the frontrunner of snakes) and is considered to be Anantashesha or just Ananta (endless or infinite) as he is known to still be in existence even after the end of the Kalpa when the whole universe is obliterated. 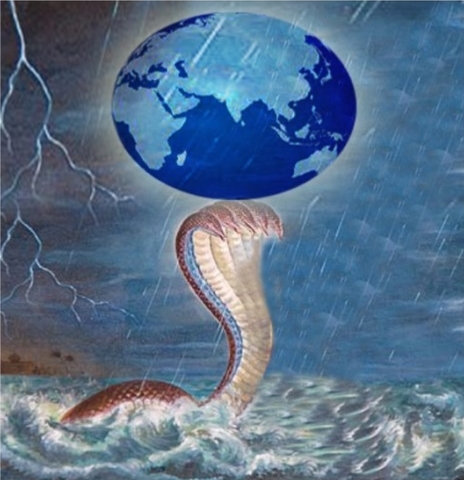 As per the Mahabharata, Shesha Naga was born to Sage Kashyapa and his wife Kadru, one of the daughters of Daksha. As time passed, Kadru went on to give birth to a thousand snakes, of which Shesha was deemed to be the oldest.

After he was born, Kadru birthed Vasuki, Airavata and Takshaka in that order. Several of Shesha’s siblings were malicious by nature and caused harm to others for their amusement. Rishi Kashyapa was also the father of Garuda via Vinatha, Kadru’s sister. Shesha’s brothers were cruel to Garuda as well.

Shesha decided to leave his family and carry out rigid austerities and meditation as he was appalled and unhappy with the disgusting behavior of his brothers. He resided on air and performed penance in several sites, including Gandhamadna, Badarikashrama, Pushkara, Gokarna and the Himalayas. His dedication was so severe that his flesh, skin and muscles became dry and fused with his frame.

Since Lord Brahma was satisfied with his devotion and commitment, he materialized before Shesha Naga and informed him that he could request for any boon. The giant serpent desired a way to keep his mind under control so that he could carry on with his ascetic practices for a long time. Lord Brahma willingly granted him the boon.

Lord Brahma then requested a favor from Shesha Naga. He asked the enormous Nagaraja to travel beneath the Earth and to stabilize it. The giant snake was more than pleased to be assigned this new task. He instantly headed to Patala (the Netherworld) and lifted his hood and balanced Earth over it. It is whispered that he carries the Earth on his hood even today, thereby making Patala his constant abode.

This is why Ananta Shesha ended up becoming the bearer of the Earth as well as the giant serpent in the cosmic water where Lord Vishnu rested for moments between the manifestations of the universe. It is believed that Lord Vishnu saw the universe in his dream while resting on Shesha Naga. The enormous Nagaraja also backed Lord Vishnu in his incarnation as a boar by grasping one of his feet as he emerged from the waters.

Thus, Shesha Naga was referred to as the cosmic serpent in Hindu legends. He became renowned as the world serpent in post-Vedic literature as he is believed to support the earth on his hood.

Kundalini Shakti
When it comes to denoting kundalini energy, the imagery of a snake is frequently utilized. The serpent is believed to stand for ‘Kundalini Shakti’ because when there is a need, then it can lift its hood and stand vertically.

There is an uncanny similarity between Shesha Naga who is believed to be the King of Naga (serpents) and is assumed to have 1000 heads and Sahasrara Chakra because when it is completely opened and unblocked it is depicted as a lotus flower with 1000 petals of multiple colors. When an individual is awakened, he is viewed as a king since he has command over his inner senses.

Serpents are revered in Indian mythology and culture. Millions of people worship snakes. Naturally, there are many temples dedicated to them. Some of them are:

Situated alongside the banks of Kumaradhara River in Karnataka, Lord Subramanya, Vasuki serpent and Shesha serpent are venerated in this temple. It is believed that Vasuki, Shesha and other snakes took shelter in the caves. Worshippers afflicted from Kal Sarpa Dosha visit the shrine to be free of the problem.

Situated in Thirunageswaram of Tamil Nadu, Naganathaswamy Temple is renowned for its Lord Shiva shrine. The reigning deity is Ketu. It is said that the mystical giant serpents such as Shesha Naga, Dakshan and Kaarkotakan used to venerate Lord Shiva at this temple. 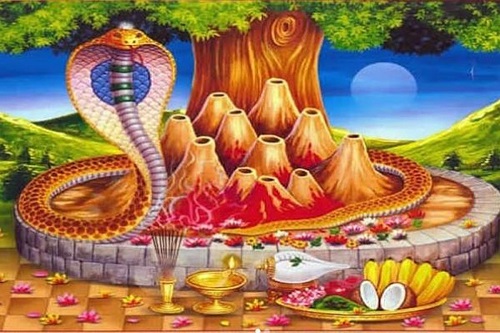 Nag Panchami
Nag Panchami is believed to be one the most ancient festivals observed across India, during the rainy season. The day is auspicious for worshippers of both Lord Shiva and Lord Vishnu. On this day, the devotees also worship the Naga Devta or the snake deity. Some of them are Anantha (Shesha Naga), Kaliya, Vasuki and so forth.

Snakes have been associated with Hindu deities in Indian folklore for a long time. Shesha Naga was believed to be the bed for Lord Vishnu and as per specific scriptures, the globe is supported by the head of Adishesha.

In the upcoming year, Nag Panchami will be commemorated on Tuesday. 2nd August, 2022.

How is Nag Panchami Celebrated?

Nag Panchami Puja
The main ceremony is to offer milk to the Nag Devta (snake god). Dishes prepared with milk are the chief food items and it is also presented as ‘Prasad’ to the deity. Devotees are known to create snake idols with clay homes for the puja. Milk, turmeric, Kumkum and flowers are used for the ceremony. Worshippers are also known to place flowers and milk next to the burrows and holes where snakes may reside. 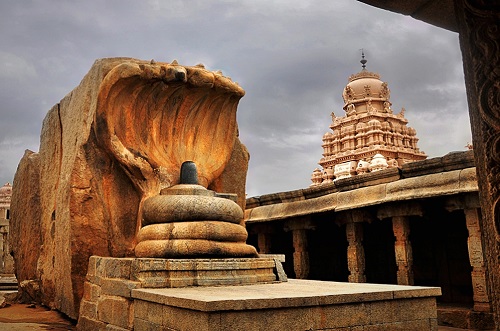 Shesha Naag Puja aids you in winning over your enemies and shields you from the malefic effects and negative influences from the Kundali. This puja is believed to help you eliminate the evil impacts of the Kal Sarpa dosha from the Kundali of an individual. It is said that if you recite the mantras with utmost sincerity and dedication from sunrise till sunset, it can eradicate all kinds of issues from the Kundali of the afflicted human being. To get the best results, perform this puja with the assistance of a knowledgeable pandit.

Worshipping Shesha Naga can help you in getting rid of hurdles and aid you in making your life more peaceful and problem-free. It governs and regulates the flow of wealth and offers assistance in developing assets. Venerating Shesha Naga can help in averting thieving and losses from accidents. Devotees continue to be healthy and at their best physical health.