Shukra: The symbol of beauty, wealth, pleasures, comforts, and luxuries

Shukra or Venus is one of the most important celestial bodies in the planetary system as per Vedic astrology. A person’s beauty, wealth, pleasures, comforts and luxuries are believed to be governed by the Shukra planet. Shukra Yantra is used to appease the planet Venus. The malefic effects of this planet on marital life are curtailed by worshipping the Shukra Yantra. In order to bring and maintain happiness and harmony in martial life and to attract riches, this Yantra should be worshipped.

According to the great epic Mahabharata, Shukracharya was not only a Lord of wealth but also the master of the medicinal herbs, the mantras and all kinds of tastes. His capabilities are believed to be wonderful. He had donated all His wealth to the demons and had accepted the life of a hermit. Inspired by Lord Brahma, He became a planet and started to protect the lives of all the living beings of all the three worlds. In His form of a planet, He attends the assembly of Lord Brahma. If the position of Venus is unfavourable in the natal chart of a person, the person is bound to face some of these problems like problems or ailments related to eyes, stomach, venereal diseases, impotency, skin diseases and loss of hunger. Attributes like artistic talents, luxurious spending and youthfulness are related to Shukra. Also, marriage, sexual pleasures, inclination towards flowers and scents, vehicles and business partners is related to the planet Venus. 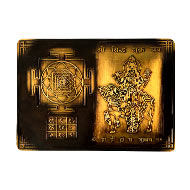 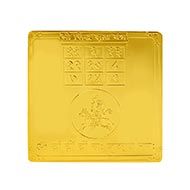 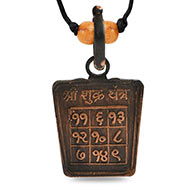 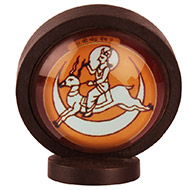 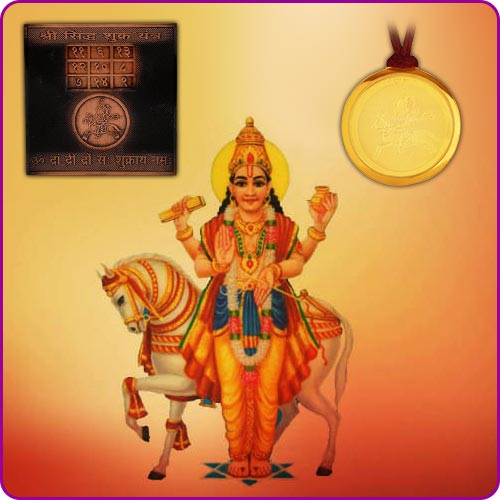 In order to be financially stable, to overcome the debts and to attract prosperity, you can install the Shukra Yantra in your house, office or even wear it as an ornament. This Yantra also resolves problems in a relationship and brings harmony. The Shukra Yantra is a sacred instrument that consists of a figure or symbol characterized by simple geometric forms arranged in a symmetric design that resonates with the powers and positive frequencies of the Shukra planet. This mystical diagram has the power to attract the principles of the planet deity and carries the signification of a mantra. This powerful Yantra resonates with the positive energies of the planet Deity and blesses the worshipper with riches, comforts, success and harmony in relationships.


Shukra Yantra: An object of Meditation

This Yantra can also be used for meditating over the planet Shukra. This will help in making you more focused and mentally stable. It will also aid in attaining union with planet deity through geometric visualization. This Yantra is the window through which you can align with divine energy. Through resonance it connects you to the energy present in the macrocosm.

When you look at the Shukra Yantra, you will notice certain symbols and numbers that are engraved or printed on it. The symbols include bindu meaning dot, Bhupura meaning square shape, Padma meaning lotus petals and Chakra meaning circle. The Bindu indicates the energy and its extreme concentration at the centre. It is also called the centre of cosmic radiation. Bounded by different surfaces such as a triangle, a hexagon, a circle, the bindu represents the union with the force or creative energy ruling the Yantra. The Bhupura represents the Earth Element that resides in the physical self. Yantra start with the dot and end with the square. It implies the way the cosmos evolves. It begins with the subtle energies at the centre, with granular at ether and then culminating in earth. The lotus petals symbol is known as the Padma (divine lotus). A lotus in Yantra represents the unconditional force of the Supreme Absolute Truth. The lotus serves as a divine seat for devas (gods). It also represents detachment. It grows in the mud but never touches even a tinge of mud, representing detachment to the external forces (material world) and maintaining the original nature which is pure and divine whereas, the Chakra stands for rotation which is central to the functioning of the macrocosmic progression. At the same time, the circle signifies perfection and the peaceful creative void of the Vishudha chakra. In the series of the five fundamental elements it represents the Air Element. As mentioned earlier this Yantra also has numbers engraved on it, these numbers make a mathematical design and you look closely, whichever way you add the given numbers, be it horizontally, vertically or diagonally, the sum of it remains constant. The upper centre of this diagram contains the number for each respective planet.

Venus signifies beauty and attraction. Venus makes the natives active and passionate in nature, enhances their personality by making them soft spoken, loving, courteous and playful. It also blesses the natives by bestowing them with graceful, emotional and happy personalities. Venus is also believed to rule the business and gambling arenas. According to Vedic numerology Venus rules the number 6. Venus is also associated with Ayurvedic medicine and cures many diseases.