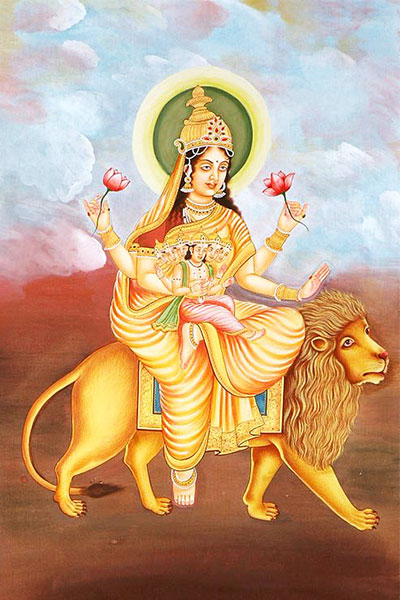 Worship of Goddess Skanda Mata on the Fifth Day of Navratri

Skanda mata is the Fifth aspect of Navdurga. On the blessed Fifth Day of Navratri Pooja in 2023, Skanda mata is worshipped. Goddess Parvati is mother of Kartikeya (Lord Skanda) and thus revered with name 'Skanda mata'. When all Devta (deities), Rishi-Muni (saint, holy men) and Manushya (mankind) was tired from torment as well as domination of colossal giant Tarakasur, Kumar Kartikeya is the only almighty who demolished the tyranny of Devil Tarakasur. Being the mother of powerful deity Kumar Kartikey, mother Parvati is glorified with the name 'Skanda Mata'. She is the true Goddess of endurance.

After Sati immolated Herself, Lord Shiva withdrew Himself from the worldly life and material affairs and started meditation in seclusion. On the other side, the demon Tarakasura performed a great tapasya (penance, austerity) and pleased Lord Brahma to award him immortality. When Brahma refused such boon, the demon used his intelligence and asked for death at the hand of Shiva’s son. Brahma quickly offered him the boon.

Tarkasura knew that Shiva practiced austerity and would never marry in His life. The gods getting aware of the demon’s tactic rushed to Lord Vishnu for help. Lord Vishnu said they should have attended Daksha’s Yagya ceremony. Sati would not have burnt Herself.

Lord Vishnu revealed to them that Parvati, daughter of King Himavat, is an incarnation of Sati who is destined to marry Shiva. Narada Muni on the other side convinced Parvati who already had a desire to marry Shiva that if she performs severe austerity, Shiva will be pleased to accept her.

With the help of Kamadeva, the gods managed to invoke in Shiva a desire for having Parvati as His wife. Finally, Shiva and Parvati marry and unite to give a very powerful seed. That seed turned out to be a supremely energetic child who was nurtured by six Krittikas, mothers, under the supervision of Paravati. The child was therefore known as Kartikeya. He grew up to be an extremely handsome and strong.

Seeing his battle skills and strengths (mental, emotional and physical), Brahma appointed him as the Commander-in-Chief of the gods. He was called ‘Skanda’ meaning the one who attacks. After assuming the post, Kartikeya finally took to the task of killing Tarkasura. The battle lasted for years and finally the demon was killed by Kartikeya or Skanda.

The gods glorified him and the mother (Parvati) who gave birth to such a heroic son. Therefore Paravati was hailed as Skandamata, the mother of Skanda who killed the giant demon Tarkasura.

She is represented with four-arm holding six-faced infant Kumar Kartikey in her lap. Her both right and left upper hands hold lotus flower. She is also revered with name 'Padamasana devi' as she seats on lotus in state of meditation. Worshipping mother of Skanda on the Fifth day of Navratri Pooja has great significance. She mesmerizes the worshippers with her peace and tranquility. She is the true Goddess of purity. By offering invocation to this almighty, worshippers can travel the tranquil Universe to pacify their soul and mind. This great journey makes them realize the heavenly truth of life. They leave their sorrows behind and achieve the great and divine contentment in life.

It is believed that devotees and worshippers enter in 'Vishudha Chakra' during this day of Durga Pooja. Vishudha means pure in all directions. Thus, in this state, worshipper moves toward undiluted thoughts. They feel removal of impurities and tensions of outer world, and immerse themselves completely in adherence of mother Skanda. Worshiping mother Skand on auspicious Fifth day of Navratra, devotees experience and realize the immense peace and pleasure in soul and mind. They become entirely free from meaningless anxieties of life and enjoy the divine happiness endowed by mother Skanda.

Panchami of Navratri Pooja is completely dedicated to mother Skanda that help devotees to achieve her profound blessings. Her divine luster radiates the life of her devotees. With her grace, all true wishes are accomplished. She never let her devotees return with empty hands. In fact, her blessings are boundless that bestows real peace in life. She shows the directions toward Nirvana or Moksha. Offering devotion to this Goddess, devotees come out from dilemma of life and peacefully move ahead for salvation. Jai Skanda Mata!

Goddess Parvati is also called the Skanda Mata after She became the mother of Lord Kartikeya or Skanda. Her complexion is Shubhra which is pure white. Worshipping Skanda Mata bestows the devotees with the blessings of Lord Kartikeya., the God of War. This is the only form of Navadurga that possesses this quality.

Her vahana is the ferocious lion and she is shown with 4 hands. She carries baby Murugan or Kartikeyan in Her lap holding Him in the right hand. She holds the lotus flowers in her upper two hands. Her other right hand is in Abhaya Mudra. She is seated on a lotus and hence known as Goddess Padmasana.

The fifth night of Navratri begins with worship of Skandamata which is performed by using sacred puja items. The devotee uses a shallow pan like utensil made of clay as base. Three layers of mud and Sapta Dhanya/Navadhanya (grains) seeds are poured into the pan. The next is a little water is sprinkled so that seeds get enough moisture. A Kalasha (holy water pot) filled with Ganga jal, Supari, a few coins, Akshat (raw rice mixed with turmeric powder) and Durva grass is placed in the base. Then the five Mango tree leaves put around the neck of the Kalash which is then covered by a coconut.
Book Skanda Mata Puja Now