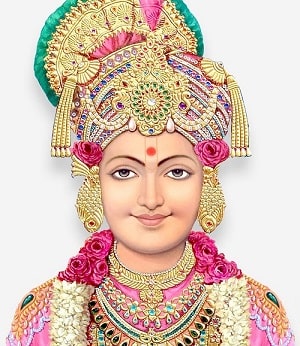 Swaminarayan, who is also referred to as Sahajanand Swami, was a Yogi and ascetic, around whom the Swaminarayan Sampradaya grew, and whose life and teachings helped reinstate central Hindu practices of Dharma, Ahimsa as well as Brahmacharya. He is regarded by his followers to be a manifestation of God. 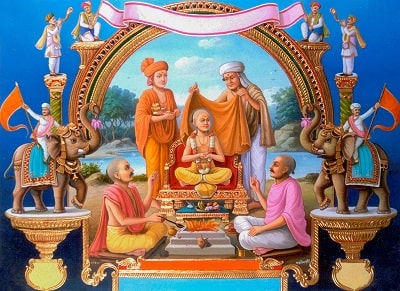 The birth name of Swaminarayan was Ghanshyam Pande in Chhapaiya, Uttar Pradesh, India in 1781. In 1792, he started a 7-year pilgrimage across India at the age of 11 years and adopted the name – Nilkanth Varni. During this expedition, he was involved in a host of welfare activities. After 9 years and 11 months of this voyage, he found solid ground in the modern-day Indian state of Gujarat in approximately 1799.

Swaminarayan was known to have a good rapport with the British Raj. He had disciples not only from Hindus but also those who were Muslims and Zoroastrians. He constructed six temples during his lifespan and selected 500 paramhansas to disperse his philosophy. In 1826, Swaminarayan penned down the Shikshapatri, a book of social principles.

He passed away on 1st June 1830 and was cremated as per Hindu rites in Gadhada, Gujarat. Prior to his death, Swaminarayan made his adopted nephews as acharyas to lead the two dioceses of Swaminarayan Sampradaya. He is also fondly talked about for taking on reforms for women as well as the poor. He also conducted non-violent yagnas (fire sacrifices) on a huge scale.

Sahajanad Swami came to be called Swaminarayan after he made his disciples learn a mantra at a public gathering, 15 days after Ramanand Swami died. He offered his supporters a new mantra, referring to it as the Swaminarayan Mantra. He requested them to repeat this mantra in their everyday rituals. While reciting this mantra, a couple of devotees ended up going into deep meditation, known as samadhi.

It is vital to understand that the term ‘samadhi’ suggests varying stages of meditation and in different situations. In Hinduism, while it is overall utilized to stand for the parting of the great souls from their mortal shells, it could also imply achieving spiritual enlightenment during meditation and penance. It is said that the followers who achieved Mahasamadhi in such a way could witness and communicate with their personal Gods, despite not being qualified in Ashtanga Yoga. This made his supporters comprehend the true power and potential of the Swaminarayan mantra. Slowly, they began worshiping the giver of this mantra as God Himself.

As a Religious Preceptor:
Swaminarayan always took a practical approach when it came to religion and spirituality. He motivated his disciples to merge piety and dharma (righteousness) to live a devout life. He made use of Hindu texts and rituals to create the fundamental rules of his sect. He established what in later centuries would become an international organization with powerful Gujarati roots.

Since he was against drinking alcohol (even while taking it as a type of medical treatment), drugs, and meat, Swaminarayan also talked about being vehemently against animal sacrifices, criminal activities, adultery, suicide, tantric rituals and placating ghosts and other such activities. He also religiously supported the segregation of sexes in the temples.

Several of his followers took on vows prior to joining under him as his followers. Swaminarayan mentioned the four elements required to be conquered for the ultimate salvation and they were Dharma (righteousness), Gnana (knowledge), Bhakti (devotion), and Vairagya (detachment).

He also taught his followers that moksha or liberation could be achieved by everybody – be it men or women. As per Swaminarayan, everyone is equal in the eyes of God and the only requirement for realizing moksha was to have a burning passion as well as the capability to work for the same. He introduced fasting and devotion among his disciples.

His supporters penned down devotional poems, which are sung during festive occasions. He commemorated the major festivals such as Vasant Panchami, Janmashtami and Holi with grand pomp and fervor. Disciples would also organize traditional folk dances like the Raas at these events.

As a Social Reformer 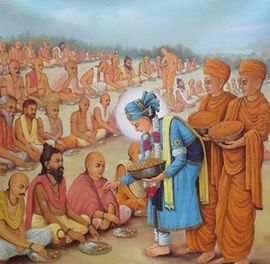 After he became the presiding deity of the Sampraday, Shri Swaminarayan participated in a lot of social work. He regularly gave out food and drinking water to the poor and the needy. He set up almshouses for the poor and established relief camps for people when there was drought. Swaminarayan passionately supported women’s rights and advocated for equality when it came to the position of women in society. He was against the heinous practice of Sati, wherein a widow would immolate herself in her departed husband’s funeral pyre.

Swaminarayan argued that human life was provided by God and it could be taken away by the Lord only. Therefore, he declared that the practice of Sati could not have the approval of the Vedas. He even referred to the concept of Sati as a cowardly act of suicide. He was also against the practice of female infanticide which was widespread at the time. He would help the parents of girls when it came to dowry and other expenses to dissuade female infanticide.

Only the affluent and moneyed people had the capability to educate their girls via private and personal tuition in that era. In order to get the female members of the society to learn, the male disciples of Swaminarayan made provisions to educate them. As a result, the literacy rate among women started to rise, and a couple of the more incredible women even started providing discourses on spiritual subjects. Within the sect, Swaminarayan is thus regarded as a forerunner of education for Indian females.

Yagnas and Animal Sacrifice
Swaminarayan was not in favor of animal sacrifice and advocated against it. But it used to be ceremonially carried out by Brahmin priests during Yagnas (sacrificial rituals). After the yagna, priests would eat the animal meat, respecting it as a divine prasad. To avert this from occurring, Swaminarayan performed numerous huge yagnas and invited priests from Varanasi. They did not conduct any animal sacrifice and religiously followed the rules mentioned in the Vedic scriptures. In this way, Swaminarayan fruitfully restored the idea of Ahimsa (non-violence) by means of performing these Yagnas.

Abolishing the Caste System
It is said that Shri Swaminarayan worked very hard to eliminate the notorious caste system which was extensively widespread at the time. He never approved of the caste system and willingly invited everyone into the Swaminarayan Sampraday. He always asked his Paramhansas to gather alms from all sections of society and also had people from lower castes as his personal assistants. He communicated freely with them, ate alongside them and generally strived to improve their status and position in society. 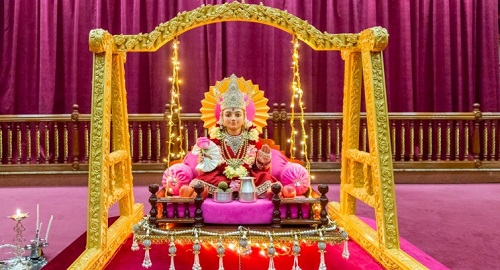 In the upcoming year, Swaminarayan Jayanti will be celebrated on 10th April 2022.

How is Swaminarayan Jayanti Celebrated?
On the auspicious occasion of Swaminarayan Jayanti, worshippers wake up early in the morning to cleanse themselves and venerate the Supreme Lord. The idol of the deity is adorned with flowers and fruits are offered. Worshippers keep nirjala upvaas, which they observe fast without drinking water for the day. However, they can eat fruits during the fasting hours. Followers spend their day listening to the tales of the life of Swaminarayan and read sacred Hindu scriptures. 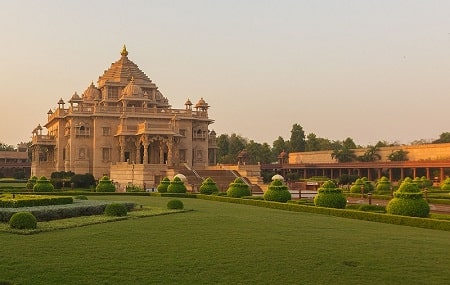 Sri Swaminarayan had several Hindu temples built and set up the idols of many deities such as Laxminarayan, Nara-Narayan, Radha-Krishna, Revati-Baldevji and many more. It was not surprising that Lord Krishna was the chief God there. Swaminarayan erected stone mandirs (temples) where he fostered and boosted the concept of Upasana or venerating the deity by the way of bhakti and vairagya.

Similar to other Hindu temples, Swaminarayan shrines too contain walkways around the central stupa to let devotees carry out Pradakshina (circumambulation) of the shrine. These are usually adorned with rich inlaid marble designs. The doors are gold or silver plated that open during the darshan hours.

The 10-story Akshardham temple in Gujarat is a gorgeous piece of architectural marvel. It contains the golden murti or idol of Shri Swaminarayan, the founder of the Swaminarayan movement. It is created out of tonnes of pink sandstone from Rajasthan. It does not use cement or steel whatsoever. It is said that this solidity will aid the temple to be around for thousands of years without any damage or destruction caused to it.

The monument is known for radiating a specific kind of spiritual aura. It is packed with a certain sense of silence of peace, which is particularly noticeable in the three floors accommodating the Hari Mandapam, the Vibhuti Mandapama and the Prasadi Mandapam. Every elaborated carving in this temple is loaded with meaning. Every statue looks real and the remarkably large dome reverberates with divine vibrations.

Akshardham Temple is more than an architectural marvel and phenomenon. It is the living embodiment of Swaminarayan followers to bring heaven on earth. Over the years, another majestic and magnificently grand Akshardham temple has been constructed in New Delhi.